Fridays For Future in the US: A small but determined movement | Environment | All topics from climate change to conservation | DW | 28.08.2019

Fridays For Future in the US: A small but determined movement

Climate activist Greta Thunberg has arrived in the US, where her Fridays for Future movement hasn't taken off yet. But the teens who did show up to recent protests have made their position clear: They won't back down. 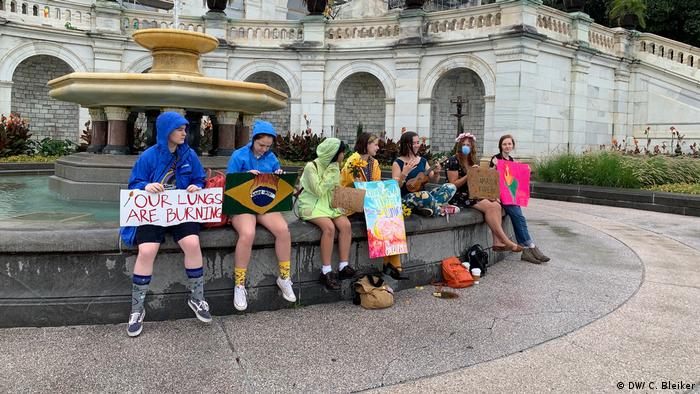 Fridays for Future? Many people in the US aren't aware of the youth climate movement that was started by 16-year-old Swede Greta Thunberg in August 2018 and has inspired students in countries all across the world to come together to protest for climate action weekly.

But the fact that Fridays for Future (FFF) is less well known stateside doesn't mean that young activists in the US are less passionate.

On a rainy Friday in Washington, DC, a small group of teens sit on a fountain on the western side of the Capitol with a clear view of the Washington Monument. Madeline Graham, 16, is prepping her fellow protesters for potential trouble. The Capitol Police might tell them to leave, she says to the five or so protesters around her, but they should stay right where they are.

"We have a right to be here," she emphasizes. 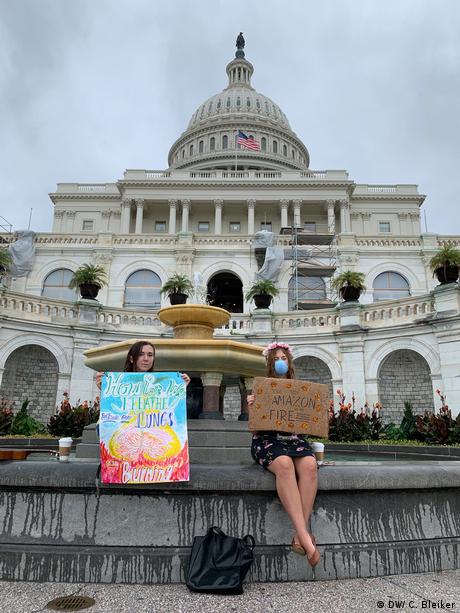 'We'll be affected by climate change, but our generation didn't cause it'

The group later grew to around 10 people — a relatively small turn-out, considering school hasn't returned from summer break in D.C. yet, but at least it meant they could stay where they are.

"If we got more than 20 people, we would need a permit, which we don't have," Graham explained. "So we would either have to split up into two smaller groups and separate, or move to the White House where you don't need a permit."

It didn't come to that — heavy rain showers made sure of it. The Fridays For Future movement is also smaller in the US than it is in Europe, but then again, it has some catching up to — FFF USA was only founded in January 2019.

Graham firmly believes that the young movement can bring about change in the US.

"Any politician who underestimates us won't underestimate us for much longer," she said. "You can't hide from righteous anger."

The focus of Friday's protest was the fires in Brazil's Amazon rainforest. The teens were joined by Carolina Schaffer, who moved to the US from Brazil a year ago and was holding a poster that read "Help us stop them from burning our forests."

At 29, Schaffer considers herself "just under the age limit for being allowed to come to this protest," but she fit right in.

Under the gray Washington skies, she joined youth activists in a sing along of "Somewhere Over the Rainbow" that Graham's friend Ella Jacobs (16) played on the ukulele.

Running on five hours of sleep a night

A couple of hours north of the Capitol, Alexandria Villasenor was striking in New York City. The 14-year-old moved to the big apple from Davis, California, last August. In November 2018 she was back in California for a visit and experienced the raging Paradise wildfire first hand.

"The smoke was so bad I had to go back to New York early," the middle schooler, who suffers from asthma, said. "Then I learned about the connection between the wildfires and the climate crisis. It made me angry."

Villasenor went on her first climate strike in December 2018 and hasn't let up since. She has organized protests in New York, like the city's big event for the global climate strike in May 2019, and coordinates with fellow activists across the US and internationally.

She also runs her own organization, Earth Uprising. How does she balance all of that with her school work and regular student life?

"I can do pretty much anything when I get enough food and five hours of sleep," Villasenor said with a laugh.

'Trying to convince people of the truth'

Jerome Foster II, a 17-year-old from Washington D.C. who is about to start his senior year of high school, says he has seen more and more energetic youth like Villasenor getting involved in climate activism since he became interested in the issue two years ago. 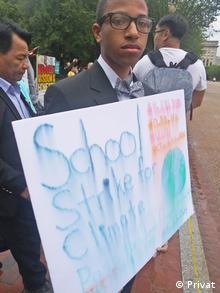 Foster doesn't have much time for sports or extra-curricular activities. He says he has "more important things to do."

The student believes the youth climate movement isn't as big in the US as it is in Europe because climate change isn't as widely accepted as fact. Sometimes, convincing people global temperatures are actually rising is an uphill battle, Foster said.

"We can't just tell people about climate change and they believe it," the 17-year-old said. "We have to double- and triple-prove it. We're trying to convince people of the truth."

That needed extra effort isn't enough to make Foster give up the fight, though. On the contrary: The longer he speaks about his activism, the more fired up he gets.

He says he is looking forward to the next big event, the Washington D.C. edition of the Global Climate Strike, on September 20th. The event is taking place the Friday before global leaders arrive in New York City for their Climate Summit on September 23. Foster hopes the politicians are ready to roll up their sleeves and tackle climate change for real.

He believes "it's the biggest threat our species is facing right now."

Countries that are least responsible for causing climate change are the ones suffering most from its effects, especially regarding food insecurity and nutrient deficiencies, reports show. Scientists warn we must act now. (28.08.2019)