After a year of strikes can Fridays For Future maintain momentum? | Environment | All topics from climate change to conservation | DW | 20.08.2019

After a year of strikes can Fridays For Future maintain momentum?

One year after Greta Thunberg conducted a lone vigil outside the Swedish parliament, the school climate strikes she inspired have become a global movement. But is there a fear that protest fatigue might be setting in? 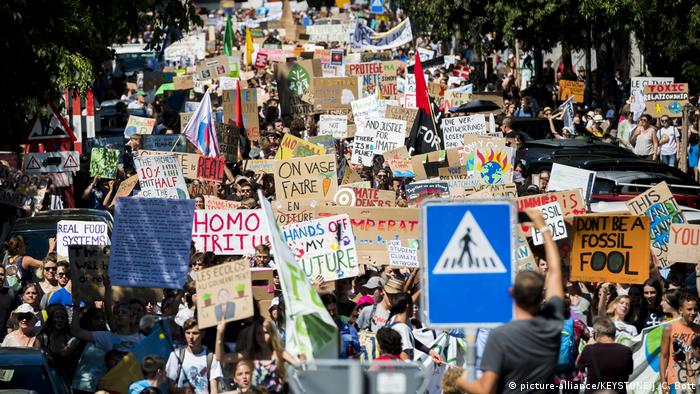 A year after activist Greta Thunberg first stood in the rain outside the Swedish parliament with her now iconic "Skolstrejk för klimatet" — school strike for the climate — placard, the movement she spawned has set the tone for environmental protest action around the world.

In the space of just 12 months, Thunberg herself has become something of a teen climate icon, and her Fridays For Future movement has led to strikes in 3,804 locations across 161 countries. The biggest was on March 15, when around 1.6 million students took part in a massive global climate strike.

But with the summer holidays in Europe leading to a decline in protest numbers, there are already rumblings about whether the movement has peaked, and how it is going to maintain momentum moving into its second year.

Keeping up the fight

Some say they've noticed a drop-off in numbers. "It's harder for students to miss out on school nowadays," Berlin student Martha Stert, who attended more than 20 weekly Fridays for Future protests in 2018, told DW.

The 18-year-old — whose summer break finished at the beginning of August — says teachers have become stricter about missing class as the weekly protests have continued; and that the movement's reputation has also been negatively affected by some students who use the strikes as an excuse to miss school.

But while Stert says she herself is struggling to attend protests as final year exams loom, she believes that younger students are just as enthusiastic and will keep up the momentum. "Protesting at school time" is an essential strategy, she says, as it's the only thing adults "are going to take notice of."

Orli Mastrocola-Simon, an 18-year-old final year high school student who has attended climate strike protests in Hobart in the southern Australian state of Tasmania, agrees. "A lot of people are definitely still involved, they are very enthusiastic and passionate," she told DW as she also readies for exams.

While Mastrocola-Simon believes the movement also drew supporters because it was somewhat fashionable, many of her friends have since become committed activists who are travelling interstate to attend protests against the Adani coal mine, for instance.

Moritz Sommer from the Institut für Soziologie, Freie Universität Berlin, and co-author of a working paper on the emergence of the Fridays For Future protest movement in Germany says part of the success of the movement is the fact that "Fridays For Future manages the climate issue as a generational issue."

"These young people feel attached to each other, they feel that their future is in danger," he told DW, adding that the movement grew up less through social media platforms than in the classroom.

Sommer's Fridays For Future paper that was released this week includes evidence that most participants found out about the protests through word of mouth, not Twitter or Facebook.

And while some political groups have supported and tried to influence the movement that has been credited with helping Green parties get their highest vote at the European elections in May, Sommer said the strikes are managed through school councils, not political parties. In this way, they have been able to appeal to a broad church by being politically non-partisan.

"A year ago, would anyone have believed that there would be a movement like this," a German Fridays For Future activist who is simply known as Simon, told DW.

Even in week 52 of the protests on August 16, when much of the northern hemisphere was still in a summer slumber, there were at least 1000 strikes in 99 countries — including in Berlin, where hundreds turned out barely a week after school returned.

In Ottawa, Canada, a small group of four weekly protesters have grown to up to 20 outside Parliament Hill in the capital.

"It's difficult to ask youth who have never taken part in any form of civil disobedience to stand up and fight against world governments they've seen as allies," Mia Beijer, who co-founded Future Rising Ottawa this January at the age of 15, told DW.

"But with the knowledge and information so easy to obtain, more and more youth are standing up and taking part in the youth climate movement, and we are becoming more and more connected."

Like in Australia, where students have actively targeted the prime minister, Scott Morrison, who last year said that "kids should go to school" — and who famously carried a piece of coal into parliament to extol the virtues of the fossil fuel —Canadian protesters are pressuring their political leaders to create change.

While the incumbent Liberal party under Justin Trudeau has, according to Beijer, "purchased old, leaky pipelines and given subsidies to several fossil fuel companies and corporations," she is concerned that "even the Green Party is showing signs of weakness when it comes to the environment and making meaningful changes for our future."

"We haven't seen enough dramatic change, from any world government, to steer us away from the climate apocalypse we are all heading towards," Beijer said. "So we will continue to strike, march and protest until we are no longer terrified to dream about what is to come in our futures."

Simon from Fridays For Future in Germany says the strategy is working. "I believe the movement is helping put the climate crisis high on the political agenda," he told DW, noting that since the protests began, a "climate emergency" has been declared in countries such as Great Britain, France and Canada, as well as in various cities across the world.

"Mobilization continues," said the authors of a July report titled Protest for a future. "This wave of climate protest mobilization is unique in its tactics, global scope and appeal to teenage school students," the report's editors Mattias Wahlström, Piotr Kocyba, Michiel De Vydt and Joost de Moor added, pointing to a long future ahead for the movement.

This longevity will be further assured as the movement broadens, says Sommer, adding that the "Global Week for Future" climate strikes planned from September 20 will symbolize the next phase of an "astonishing" protest movement. In Germany, major trade unions, for example, will join the school strikers in one of their biggest mobilizations.

"We hope adults from all walks of life will join the young all over the world," says Simon of the upcoming intergenerational climate protests organized by Fridays For Future.

'No one is too small'

But above all, the movement will stay true to Thunberg's motto that "no one is too small to make a difference" — also the title of her best-selling book.

Typical is 14-year-old Mary Ellis Stevens of Charlotte, North Carolina, who has maintained a weekly school strike for climate outside Charlotte Mecklenburg Government Center for 19 weeks — often on her own.

No toilet, no shower, no kitchen; Swedish climate activist Greta Thunberg has begun her trans-Atlantic yacht trip from Plymouth. She will spend two noisy weeks on the waves instead of flying for eight hours. (14.08.2019)