Protests and opposition from the provincial government of British Columbia have shut down construction of a pipeline planned to carry oil from Alberta to BC - but Prime Minister Justin Trudeau has vowed to fight back. 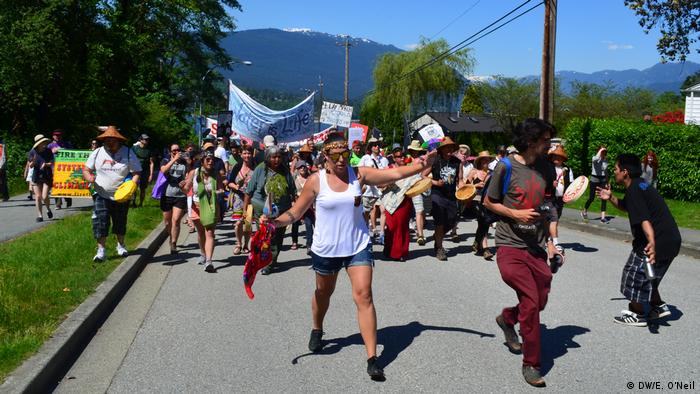 In May 2017, a line of protesters snaked into Burnaby, British Columbia - just outside of the city of Vancouver - led by members of Canadians First Nations drumming, singing and dancing.

The protesters were referring to a proposed pipeline expansion that would put Canada on the map as a major oil exporter to Asia. This is just one of dozens of protests against the expansion that Canadian First Nations and environmental activists have staged in Burnaby over the past couple of years. Now, because of those protests, and because opposition by the provincial government of British Columbia has put the status of key permits in doubt, the pipeline company has put pipeline construction on hold pending assurance from the Canadian government that all legal challenges to the pipeline will be resolved. 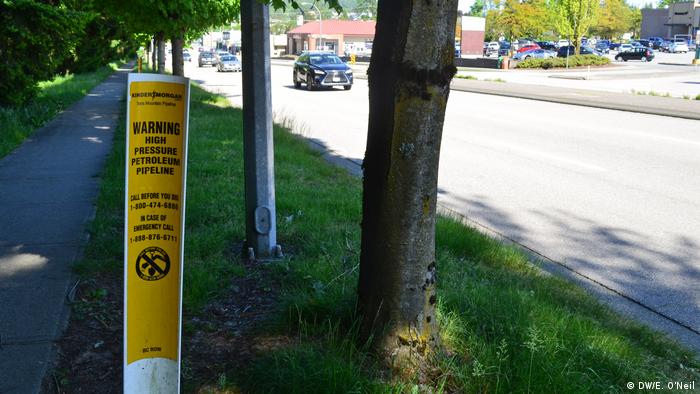 The TransMountain Pipeline runs from the tar sands of Alberta to Burnaby, British Columbia

Kinder Morgan, the Texas-based company that owns the pipeline, wants to build a second, much larger pipe that would run parallel to the existing one. Once completed, the new pipe would carry enough oil to fill up 400 tankers a year: nearly seven times as many as currently call at the port. Those tankers would transport the oil to California and Asia. 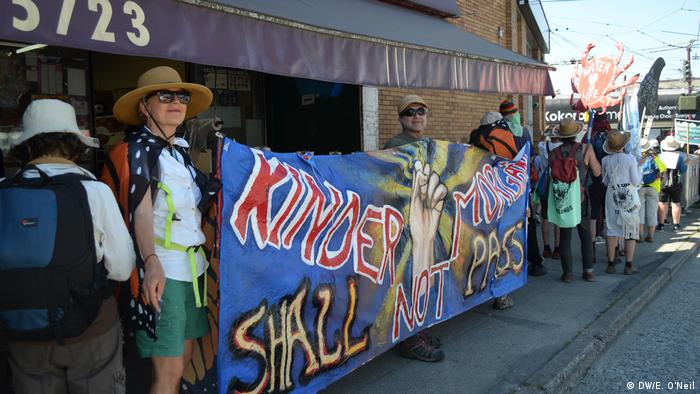 After months of protests led by Canada's First Nations and environmental activists, the pipeline company, Kinder Morgan, halted construction of the new TransMountain pipeline this April pending legal assurance from the Canadian government

Proponents of the expansion say it would be good for Canada to be able to reach new markets. Even though the Alberta Tar Sands are the third-largest known petroleum reserves in the world, Canada only has the infrastructure to export to one country: the US.

One of the pipeline's most vocal supporters is Canada's prime minister, Justin Trudeau.

"No country in the world would find 173 billion barrels of oil in the ground and just leave them there," he said, first in 2012 and then again last year. "The resource will be developed."

Under the Paris agreement to fight climate change, Canada promised to cut its carbon emissions. But Trudeau says the country can meet its commitments while building new fossil fuel infrastructure.

That's in part because the oil transported in the new pipelines would mostly get exported, so the emissions from actually burning the oil would count against, say, the US or China, not Canada.

But the process of extracting tar sands oil also produces emissions, so the country would have to make up for the increased emissions from oil extraction with even more dramatic cuts in emissions in other sectors, like transportation and buildings. Trudeau has not clarified how he would make the math work out. 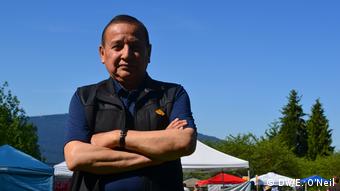 Opponents of the pipeline don't just take issue with Trudeau's math, though; they also object to his philosophy.

"We need to in a very deliberate and substantive fashion switch to renewables," says Grand Chief Stewart Phillip, president of the Union of BC Indian Chiefs and a member of the Penticton Indian Band. "We can no longer afford to even consider any further development of fossil fuel projects."

Concerns south of the border

Canadians aren't alone in protesting the pipeline expansion; people have been heading up from the US as well.

"Those are our relatives on the other side of the border," explains Jewell James, a member of the Lummi Nation native to Washington state. "Our families are from that side of the border. They back us up; we back them up."

And some of the protesters from the US have very concrete concerns about their own backyard. Any tankers headed to Asia from British Columbia would have to pass through the narrow, treacherous waters between Canada and the US.

The pipeline company Kinder Morgan's own risk analysis concluded that those straits are the most likely place for an oil spill to happen. 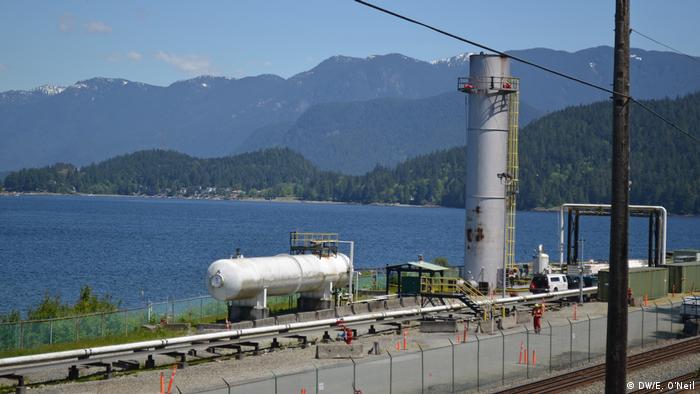 The TransMountain Pipeline ends in Burnaby, British Columbia, where oil gets transferred onto tankers

"A spill would be potentially devastating to all of those communities by virtue of doing significant destruction to our waters," says Kai Sanburn, who lives on an island in those waters, on the Washington state side. "We have a fragile orca population. We have salmon that are on the decline. You tip that balance anymore and run the risk of losing that which we truly hold very, very dear."

Kinder Morgan counters those concerns with its safety record: though the TransMountain pipe itself has leaked more than once, the company has yet to spill oil while loading a tanker.

Between protests and court challenges and British Columbia threatening to deny key permits that Kinder Morgan needs to build the pipeline, the company halted work on April 8. It says it needs assurance from the Canadian government that it will be able to finish the pipeline before it continues.

Trudeau reiterated that the pipeline will get built, but the company wants all legal questions cleared up. It says it will make a final decision about whether or not to kill the project by the end of May.

As for the protesters, they've vowed to continue as long as necessary to stop the pipeline from getting built.

"We are truly in this together," Grand Chief Phillip explains. "It's not just an indigenous issue. It's an issue that the citizens of both Canada and the United States should be deeply concerned about."

Nebraska regulators have approved an alternative route for the disputed TransCanada Keystone XL pipeline. Opponents are likely to challenge the decision and take the case to the state's Supreme Court. (21.11.2017)