Nebraska regulators have approved an alternative route for the disputed TransCanada Keystone XL pipeline. Opponents are likely to challenge the decision and take the case to the state's Supreme Court. 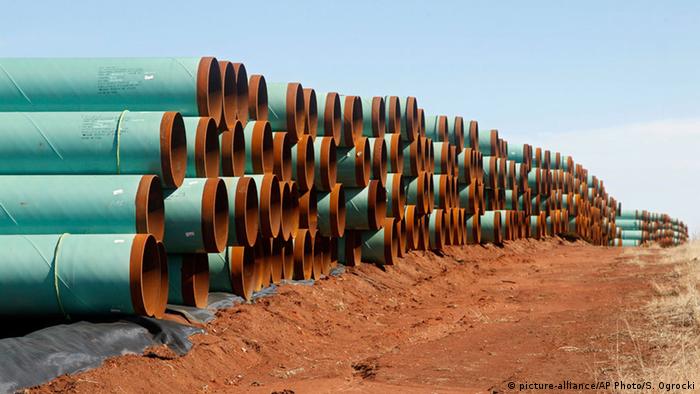 The Nebraska Public Service Commission voted 3-2 on Monday to approve a route for the TransCanada Corp Keystone XL pipeline.

The $8-billion (€6.8-billion) project is expected to face court challenges from opposition groups, Native American tribes and property owners who would have to relinquish land for the pipeline to be built.

"This decision opens up a whole new bag of issues that we can raise," said Ken Winston, an attorney representing environmental groups that have long opposed the project.

Hours after the decision, the US State Department said it would review the new route to see if there are "permitting impacts."

- 100 days of Trump: An environmental disaster?

The pipeline, originally proposed by TransCanada Corp in 2008, would stretch from Hardisty, Alberta in Canada to Steele City, Nebraska in the United States. The project is intended to extend the existing Keystone network, which went into service in July 2010.

The approved alternative route would add an extra 5 miles (8 kilometers) to the original proposal, as well as an additional pumping station and transmission lines.

In the wake of the news, TransCanada's stock increased 1.4 percent at 63.44 Canadian dollars on Monday afternoon. CEO Russ Girling said in a statement that the company would study "how the decision would impact the cost and schedule of the project."

Fight far from over

The decision was a emphatic blow to those opposing the construction of the Keystone XL pipeline, which has raised many environmental concerns. Jane Kleeb, the executive director of Bold Alliance, said her pipeline opposition group needed to review its options, but insisted her organization would "stand and fight every inch of the way."

"We are going to fight like hell to make sure this pipeline never gets built," she said.

The administration of former US President Barack Obama studied the project for years before rejecting the proposal in 2015. His successor, Donald Trump, reversed that decision by handing TransCanada a permit for the pipeline in March of this year.

Business groups and some unions support the project, saying it will create jobs and reduce the risk of shipping oil by trains that could derail. Trump has said the Keystone XL pipeline would create 28,000 jobs across the United States, but a study by the State Department in 2014 projected just 3,900 temporary construction jobs and 35 permanent positions.

An opposition group of 90 landowners whose farms lie along the proposed route have said tax revenue from the project will be short-lived and jobs will be temporary. They also fear that spills could pollute water critical for crazing cattle.

Those fears were exacerbated by a Keystone oil spill in South Dakota last week. The Nebraska commission was forbidden by law from considering the incident in its decision.

Opponents could appeal the decision to a Nebraska district court, and the case would likely wind up in the state's Supreme Court.

"This is a long and winding road," said Brian Jorde, an attorney for the landowners.