TransCanada Corp's Keystone pipeline leaked about 5,000 barrels of oil in South Dakota in the US. It comes days before neighboring Nebraska decides on the fate of the company's ambitious Keystone XL pipeline project. Canadian pipeline company TransCanada closed a section of its Keystone pipeline system after an estimated 210,000 gallons of oil leaked onto agricultural fields in the state of South Dakota in the United States.

TransCanada said in a statement it discovered the leak near the town of Amherst early Thursday after a drop in pressure was detected in its operating system. The company is investigating the cause of the leak.

Brian Walsh from the South Dakota Department of Environment and Natural Resources said the leak, which came from an underground pipeline, had been contained at the site.

"Ultimately, the clean-up responsibility lies with TransCanada, and they'll have to clean it up in compliance with our state regulations," Walsh said.

The 4,324 km (2,687 miles) - long Keystone pipeline system carries crude oil from Canada's Alberta to refineries on the US Gulf coast. It can handle nearly 600,000 barrels daily.

The pipeline has transported more than 1.5 billion barrels of crude since operations began in 2010, according to TransCanada's website.

The spill takes place just days before authorities in the neighboring state of Nebraska decide whether to grant the final permit needed for TransCanada's long-delayed Keystone XL pipeline.

The controversial pipeline, which will run from Hardisty in Alberta to Steele City in Nebraska, got a federal nod in March when US President Donald Trump reversed his predecessor Barack Obama's decision to reject the line on environmental grounds. 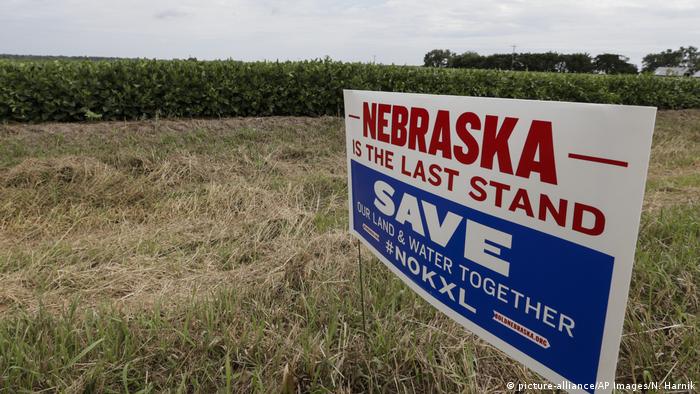 Trump argued that the proposed 830,000-barrel pipeline, which would serve as an extension to the existing Keystone pipeline system, will bring down fuel prices, create jobs and shore up national security.

"If this spill had happened along the proposed route in Nebraska, it would be absolutely devastating," said Brian Jorde, a lawyer representing Nebraska landowners opposed to Keystone XL. "Their proposed route is within a mile of thousands of water wells."

"We hope the PSC is paying attention," said Greenpeace campaigner Mike Hudema, referring to the regulatory body that will rule on the pipeline.

An announcement by the Nebraska Public Service Commission, or PSC, is expected on Monday. A rejection of the route would put the future of the pipeline in jeopardy, dealing a major blow for President and Trump and the Canadian energy sector.

US President Barack Obama has blocked the construction of a controversial oil pipeline between Canada and the United States. The decision ends years of bitter and politically charged debate, but not everyone is happy. (06.11.2015)

The company's chief executive has claimed the project will create "tens of thousands of well-paying jobs." But protesters have taken to the streets, demanding the project be scrapped over environmental concerns. (27.01.2017)