Climate activist Greta Thunberg in Berlin: 'We will never stop'

The Swedish teen activist has praised Germany's young protesters for sacrificing their education for the climate. Thunberg's movement calls on students around the world to skip school every Friday.

Teenage climate campaigner Greta Thunberg on Friday pledged to continue her campaign to force governments to do more to tackle climate change.

"We will never stop," she told a gathering of around a thousand young activists at the Fridays for Future rally in Berlin.

As adults hadn't taken responsibility for the climate threat, Thunberg said that young people "feel like they must sacrifice their own education in order to protest against the destruction of their future."

"We need to make sure that people save the world and save humankind," she said, referring to global warming, which is melting ice caps and glaciers, raising ocean levels and exacerbating extreme weather events.

The Swedish activist pledged she would "never give up and I hope that you will not either because this is a question of life or death."

She said the fight for stronger measures to reduce carbon dioxide (CO2) emissions would likely take many years.

Thunberg has galvanized young people across Europe and beyond since organizing a school strike and rally outside the Swedish parliament last August.

Mirror protests have been held in several countries on Fridays ever since. Hundreds of thousands of children have skipped school to demand faster action against the environmental threat. 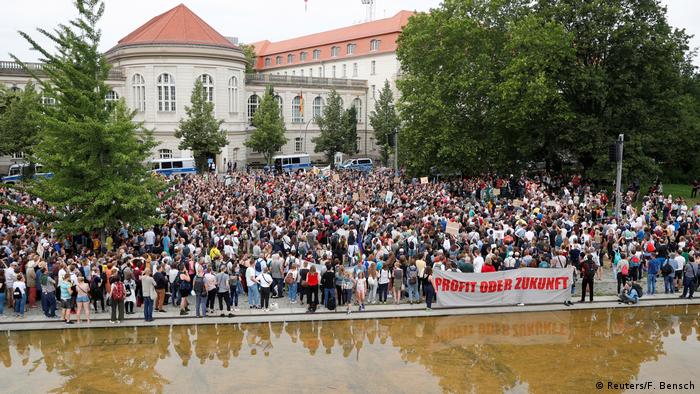 The mass truancy hasn't been without controversy. A school in the southwestern German city of Mannheim this week imposed €88.50 ($99) in fines on the families of four children who had missed lessons to attend the rallies.

The penalties were later overturned by officials in the state of Baden-Württemberg after complaints from parents.

Several other German states have also been mulling whether to impose fines.

As Thunberg addressed the Berlin crowd, German Chancellor Angela Merkel spoke at a press conference about the influence of the climate campaigner and her movement.

Thunberg will travel to France next, where she is due to receive a freedom award from the region of Normandy on Sunday and speak at an event in the French National Assembly on Tuesday.