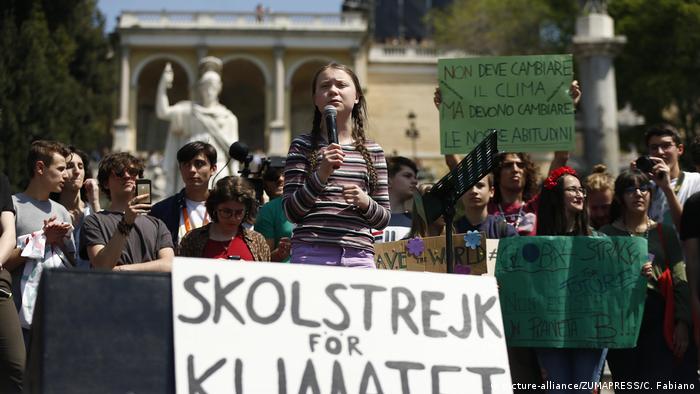 Swedish teenage climate activist Greta Thunberg and her Fridays for Future protest movement on Friday won an Amnesty International human rights award for their "unique leadership and courage in standing up for human rights."

Thunberg and the millions of school students she inspired to skip school and protest on Fridays won the Ambassador of Conscience Award, which has also been awarded to NFL quarterback Colin Kaepernick, singer Alicia Keys, as well as Nobel Peace Prize winners Malala Yousafzai and Nelson Mandela.

Thunberg said in a statement it was "a huge honor" to receive the prize on behalf of the movement, adding that "this is not my award, this is everyone’s award."

"You have to fight for what you think is right. I think all those who are part of this movement are doing that," said Thunberg.

"The blatant injustice we all need to fight against is that people in the global south are the ones who are and will be most affected by climate change, while they are the least responsible for causing it," she added.

Last year, global carbon emissions hit a new record high despite a warning from a United Nations report in October that stated output of the gases will have to be cut drastically over the next 12 years to stabilize the climate.

Thunberg has addressed world leaders at a number of venues for failing young people by not doing enough to curb climate change.

The growing movement of young protesters demanding action on climate change was inspired by 16-year-old Thunberg after she started weekly solo demonstrations outside Sweden's parliament last year. The movement has since spread across Europe and the US, as well as to countries like Brazil, Uganda and Australia.

On May 24, a global Fridays for Future school strike was staged in 131 countries.

'We all have a role to play'

"We are humbled and inspired by the determination with which youth activists across the world are challenging us all to confront the realities of the climate crisis," Kumi Naidoo, Amnesty International's secretary general, said in a statement. "They remind us that we are more powerful than we know and that we all have a role to play in protecting human rights against climate catastrophe."

Amnesty founded the award in 2002 to honor people and groups that advance the cause of human rights. No date has yet been set for the award ceremony.