The young climate activist has been awarded a special prize during Germany's best-known media awards show. She used her speech to call on media celebrities to spread the message on climate change. 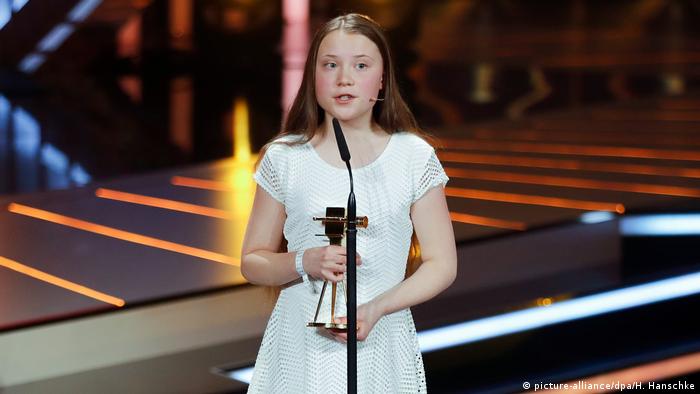 The award is one of the most recognized media awards in Germany. It was originally awarded to television personalities, but has since been expanded to international stars.

"Greta Thunberg became an icon of a new youth and protest movement within a very short time as a climate activist. Every Friday, hundreds of thousands of schoolchildren and students from all over the world take to the streets to persuade politicians to take action," the organization said in a statement.

"For Greta Thunberg there is no perhaps or sometime, but only a NOW. She shows that a single voice can be heard and make a difference. She is stubborn and determined in her demands for climate protection. Her words are rapidly disseminated in the social and classical media, and her mission is supported by new followers every day."

In her acceptance speech, the 16-year-old called for urgent steps to combat climate change, saying the world is at a crossroads. She called on media celebrities to use their voices to help effect change, criticizing them for the lack of action to date.

"There is still a little time to change something. But this time must now be used for more climate protection," she said.

She dedicated the special prize to the activists who protest against the destruction of the Hambach Forest, which is threatened by lignite mining.

Thunberg's impassioned campaign against climate change has inspired young people around the world to take action. The Fridays fo Future school strikes have proliferated around the world.

The Swedish climate campaigner Greta Thunberg was welcomed by thousands of children in Berlin as she spoke at the Fridays for Future strike. The German government ignored her, and has not backed EU climate measures. (29.03.2019)

A global school strike against climate change inaction is underway. Protests have taken place or will do so in more than 100 countries, all following the example of one young Swedish climate activist. (15.03.2019)