Germany′s youth wake up to their political power | Germany | News and in-depth reporting from Berlin and beyond | DW | 08.06.2019

The European Parliament elections clearly showed that Germany's young people want their voice to be heard. Observers say a new political generation is rising, with new ways of sharing its thoughts and priorities. 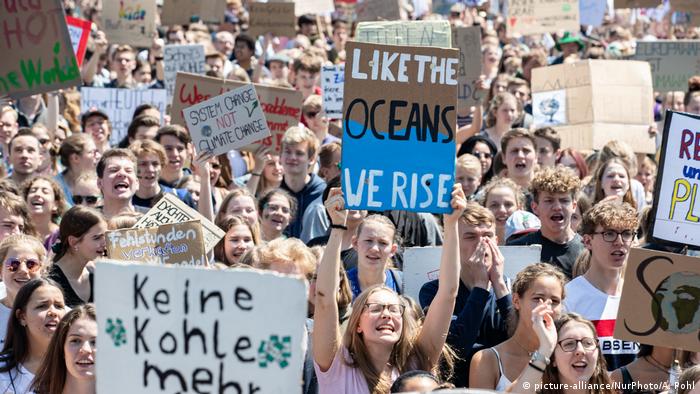 The European Parliament elections on May 26 made it clear that Germany's young generation is far more interested in politics than many had believed. Indeed, almost 20 million young Germans turned out to cast their ballot, causing a minor political earthquake. Germany's established centrist parties, the Social Democrats (SPD) and the Christian Democratic Union (CDU), which constitute the country's governing coalition, garnered far fewer votes than they had hoped for, while the environmentalist Greens triumphed, being by far the most popular party among German voters aged 18 to 30.

Many observers now wonder whether this electoral result signals the rise of a new political generation, comparable to Germany's counterculture movement of the late 1960s, which questioned many of the country's postwar values and customs. Today's environmentalist generation similarly appears to seek to revolutionize German politics and set a whole new policy agenda. 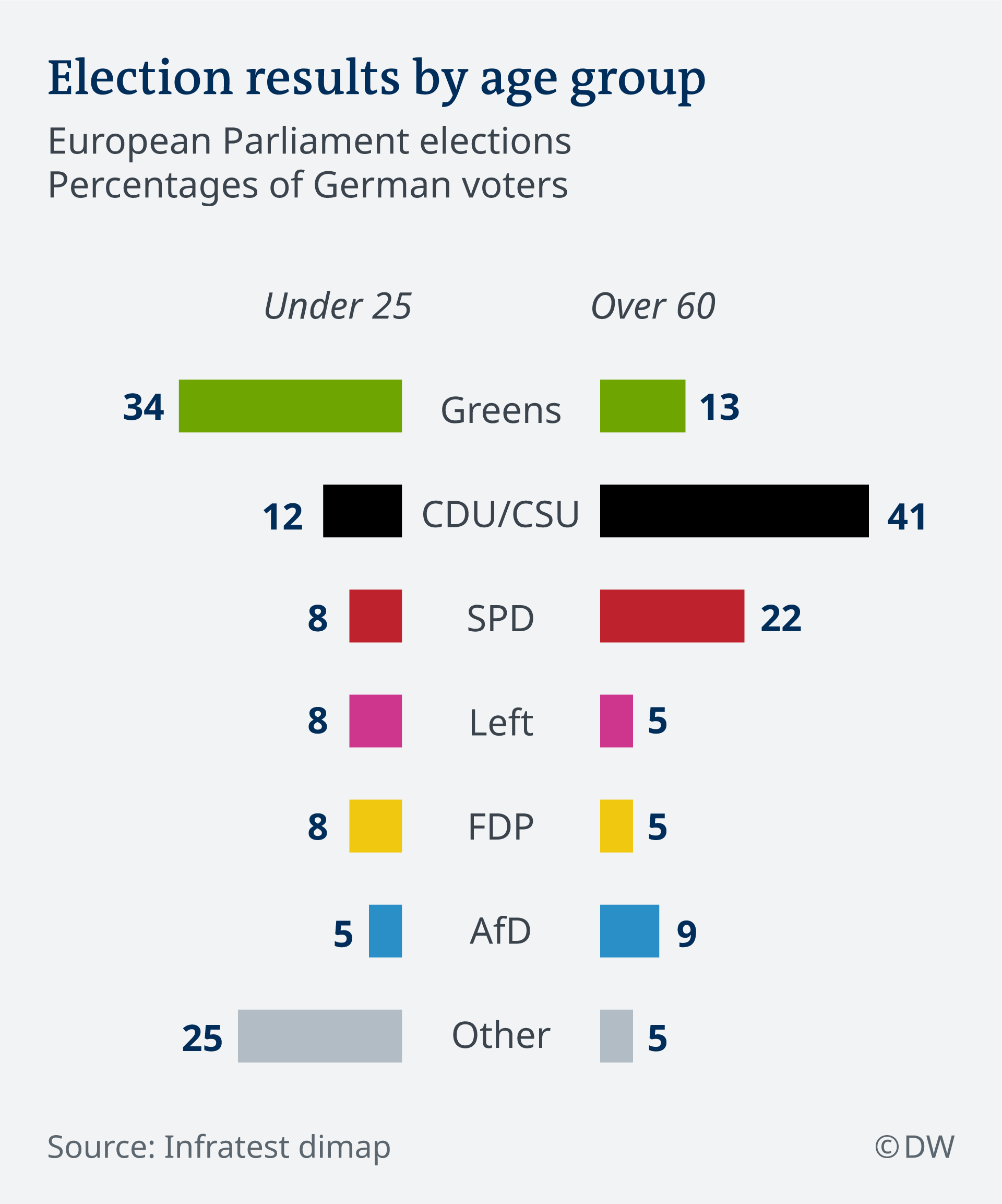 More than 19 million Germans are below the age of 25. In western Germany, this cohort comprises about a quarter of the population and in eastern Germany, 19%.

Obviously, not all of Germany's young people have yet reached the age of 18 and are entitled to vote. Even so, many have become politicized by the Fridays for Future climate rallies, which kicked off in mid-March with a worldwide protest and were followed by a second global rally in late May.

More than 300,000 Germans — most of them students and schoolchildren — took to the streets. For many of them, this was their very first political protest: Berlin's Institute for Social Movement Studies (ipb) conducted a randomized survey among the protesters and found that it was the first-ever political rally for 31% of respondents.

The Fridays for Future climate movement was founded by 16-year-old Greta Thunberg from Sweden, who has become a role model for many environmentally minded young climate activists. Researcher Simon Schnetzer, who publishes the regular "Young Germans" study, says: "Greta Thunberg started a movement. She will go down in history as someone who changed the political discourse. The Fridays for Future rallies showed people under 18 who cannot yet vote that they can influence the global agenda."

Women, girls come to the fore

It currently feels as if Germany is only now waking up to the fact that it has millions of young citizens who have political opinions of their own. Students are suddenly being invited to political talk shows on television and adorn the cover of Germany's most reputable weekly news publication, Der Spiegel. The 2015 Shell Youth Study found that 41% of teens described themselves as politically minded, compared with only 30% in 2002.

What has changed, however, is that the majority of young protesters today are female. A study by the Chemnitz University of Technology found that 70% of protesters attending the Fridays for Future rallies in Amsterdam, Florence, Warsaw and Vienna were girls and women.

The recent climate protests, incidentally, came about independently of any affiliation with political parties or other major organizations. This development is also reflected in a 2016 study by the Friedrich Ebert Foundation (a German political foundation associated with but independent of the SPD), which found that of all those who said they were politically engaged, just 16% reported being a member of a party or labor union.

Nineteen-year-old Anna Nell is one such independent activist. She lives in the southern city of Freiburg — known as one of Germany's leading cities for sustainability and ecology. Nell is involved in the "Young Freiburg" initiative, which works to elect young independent candidates to the city council. She says the EU elections were a wake-up call that "showed what our young generation is capable of achieving; now we must be taken seriously." Nell prefers autonomous initiatives to large parties, in which she says it takes too long to have one's voice heard.

Read more: Germany's women: 'We don't have balls, but we know how to use them'

The availability of social networks has made it easier for young people outside the establishment to make their views known. A few days before the EU parliamentary elections, a young German YouTube star named Rezo caused quite a stir when he uploaded a video railing against the CDU and SPD, accusing them of having failed to take decisive action on climate change. The clip was viewed some 14 million times and inspired a collaborative video message by over 70 famous German YouTubers urging the electorate not to vote for either party.

Among them was German YouTube star Diana zur Löwen, who has more than 600,000 subscribers. While known for her fashion and beauty content, she has in recent times started producing clips that address political issues, including abortion, and she has collaborated with the European Parliament. Many of her subscribers are excited about the star's political content. "YouTube and I have evolved," Diana zur Löwen tells DW. "I realized at some point I no longer knew what was going on around me." This prompted her to share videos of her political soul-searching with her audience.

Tanja Hille, a political scientist and founder of the "Y-Politik" podcast series, tells DW that YouTube stars can be tremendously influential when it comes to politicizing young people. She says that while her generation had to actively search for information, "young people today get political content delivered into homes through YouTube stars like Diana zur Löwen." As Hille explains, this means that "young people are directly confronted with political issues, which is why Rezo's video was such a success." Until his political tirade, Rezo had been known for innocuous, entertaining content.

Political establishment out of touch

But the new generation has not yet found its way into the German political establishment — there are very few younger members of the German Bundestag, for instance. And the country's big parties are still largely inept, for example, at handling critical YouTubers. After Rezo's online tirade went viral, the CDU leadership published an unwieldy 11-page PDF reply. Nell, from the Young Freiburg initiative, says this shows just how out of touch the party is. "They do not understand the young generation; nobody reads through such a thing."

The 28-year-old Diana Kinnert, on the other hand, is a politician with Germany's conservative CDU party. She understands why for many young people, "parties are really unappealing in many different ways." She says that the generational trends are reflecting societal changes. "Young people have not become politically disengaged; they just prefer different forms of activism," she told DW.

YouTuber Diana zur Löwen agrees. She says: "I think many people are sick and tired of politicians without passion. We want to see real political zest, and politicians who give us a glimpse of their personal life on Instagram." 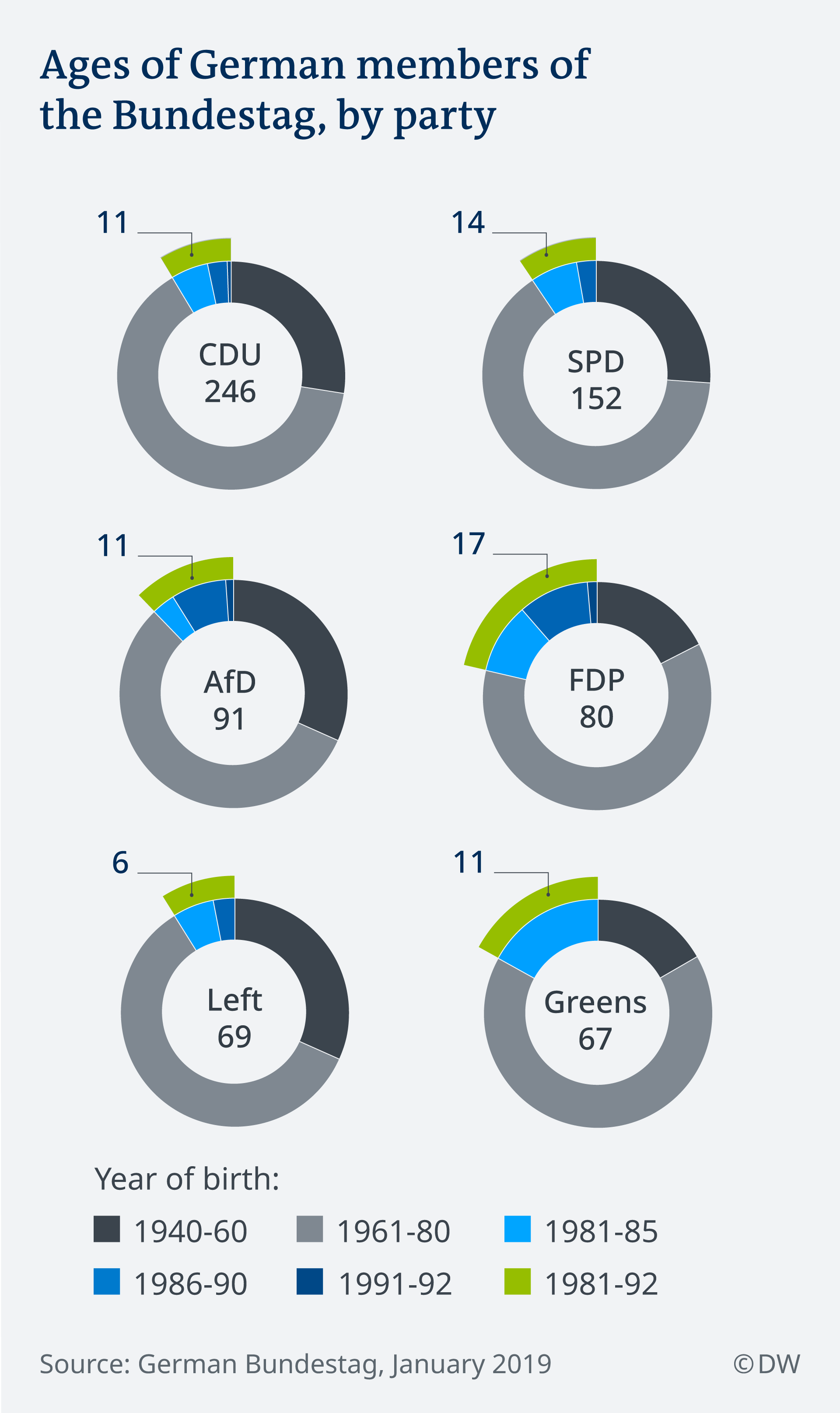 So far, the Fridays for Future protest movement largely remains the preserve of the young, educated middle class. It is not as politically inclusive as one might think — unsurprisingly, some prominent Fridays for Future activists in Germany are members of the Green and Left parties.

Even so, the recent EU elections showed that the young generation is making its voice heard. "This is just the beginning," says youth expert Schnetzer. "It will be a breath of fresh air for German politics, because young people not only hold strong opinions but can also mobilize many others."

YouTube in schools: A digital revolution in the classroom

Teachers and parents might not have noticed, but students don't only use YouTube for fun. According to a new study, about half of them watch videos to learn things as well. How does this affect the educational program? (04.06.2019)

A YouTuber has come under attack from politicians in Chancellor Angela Merkel's CDU, accusing him of spreading false information about the party. The YouTuber had accused the party of not doing enough on climate change. (22.05.2019)

The head of Germany's CDU is facing a backlash after suggesting there should be "rules" for influential online bloggers during election campaigns. Thousands signed a petition calling for an end to attacks on free speech. (29.05.2019)