Germany's women: 'We don't have balls, but we know how to use them'

Ahead of the World Cup in France, Germany's women's national team have hit back against stereotypes with a powerful campaign. The hard-hitting video has received widespread praise for its message of female empowerment. 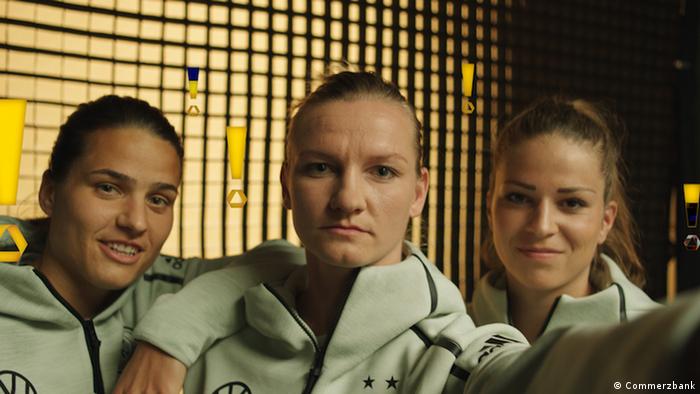 Ahead of the World Cup in France, which kicks off on June 7, head coach Martina Voss-Tecklenberg and members of her 23-woman squad featured in a provocative ad made by the team's main sponsor, Commerzbank.

"We've been proud sponsors for 10 years," Uwe Hellmann, head of brand management at Commerzbank, told DW on Friday. "It's the third ad campaign we've done with the women's national team, and we've built up a lot of trust in our relationship. So when we went to their training camp to pitch the idea, they thought it was fantastic."

They agreed immediately, Hellmann said, in large part because of the kinds of issues the campaign deals with: "What moves Germany's female footballers? And what are the topics affecting them in the lead up to such a big tournament like the World Cup?

"Those are exactly the topics — the reservations, the prejudices that they face — which are in such stark contrast to the performances they produce. What they have achieved is remarkable, and it's not common knowledge. We wanted to capture that and support them because it felt like the right time to be blunt about this."

"Since we started out, we haven't just fought against opponents, we've fought against prejudice ... but you know what? We don't have balls, but we know how to use them."

The direct translation would have been "we don't need balls, we have ponytails," but in that, the wordplay involving the double entendre associated with the German word "tail" is lost.

The video, which has more than 1.3 million views, also pokes fun at the fact that after their first title triumph, at the 1989 European Championship, the women's national team didn't receive any monetary rewards, but had to settle for tea sets(!) instead. It was a minor detail recognizing how far they've come, underlining a poignant point without taking themselves too seriously. 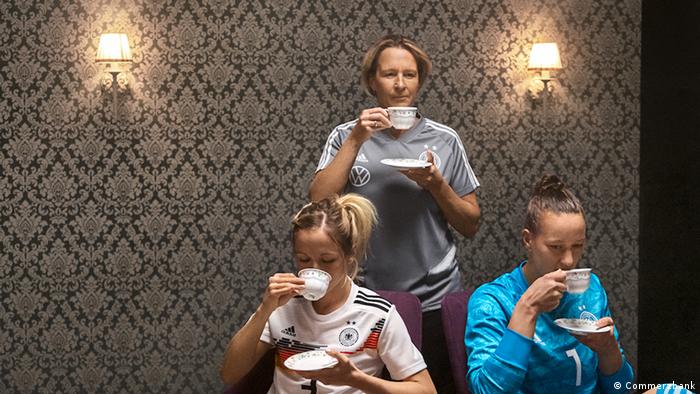 "I'm completely blown away by the ad campaign – it was done with self-confidence, irony, a wink and a clear message," said Voss-Tecklenburg, who features in the video.

The campaign has received praise from all corners for the way it was executed at a time when women's football is just starting to receive the recognition it's been battling for.

"The reaction has been overwhelmingly positive," continued Hellmann. "We thought it would be well received because we've tried to capture an incredibly authentic topic. We've seen a reaction the world over, in Germany and internationally. They have received recognition for their self-confidence, how brazen they were, but they nevertheless did it with a smile and their smarts.

"That self-awareness was understood and seen in an extremely positive light. The amazing thing about it is that's what the team are really like. That was what was so fascinating about the process, what made it so much fun and what we've been delighted about since, because we've managed to hit our targets in order to support this team, who we think are brilliant. We're delighted with the end product and incredibly proud."

While the video and the reaction it has garnered is progress that could add to the snowball affect currently being seen in women's football, the off-pitch battle continues – with France's summer showpiece in mind.

Ballon d'Or Feminin winner Ada Hegerberg, who has helped Lyon to three consecutive trebles, will not feature for Norway due to an ongoing battle for equality.

Since she announced her decision to step back from international football in 2017, the Norwegian FA have reached an equal-pay agreement, but for Hegerberg "it's not always about the money. It's about preparing, taking action, professionalism."

Money is, however, the source of a dispute involving the US women's national team (USWNT), who will be looking to defend their world title in France. The USWNT filed a lawsuit against US Soccer in March over "institutionalized gender discrimination" as they seek equal pay to what their male counterparts earn.

To enact change pioneers are needed and in women's football, there is a growing sense that now is the time. On Friday, UEFA launched the first-ever "women's football strategy" #TimeforAction – a five-year plan aimed at doubling the number of female players in Europe by 2024 while at the same time changing perceptions.

As the best-ranked European team in the FIFA rankings – second overall only to the USWNT – Germany's women have used their platform to convey an important message in their viral video. Now they will be looking to use the World Cup as a springboard as they seek to continue to make progress towards a more equitable future in the game.