The IAA motor show in Frankfurt was disrupted by crowds of climate protesters. They demanded an overhaul of transport policy with environmental concerns at the forefront. 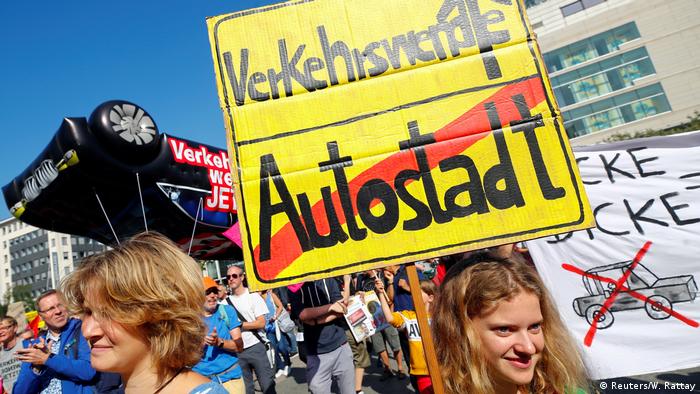 Tens of thousands of climate demonstrators turned up to protest at Germany's biggest car show in Frankfurt on Saturday, using the event as a platform to demand the car industry address its role in damaging the environment.

Estimates of the number of participants protesting at the International Motor Show Germany (IAA) ranged between 25,000 and 18,000 protesters, with more than 10,000 of these on bicycles as part of the "Sternfahrt," or "Star Ride," journey.

The protesters marched for an end to the combustion engine and for a government and industry overhaul of transport policy that prioritizes zero and low-emission modes of transport such as bicycles, walking, buses and trains.

Further charges leveled at the car industry by protesters were that the automobile industry is not moving fast enough towards emissions-free transport and that more should be done to stop SUVs, which are considered especially harmful to the environment.

The protesters displayed banners calling for a "Verkehrswende," or "transport transition," in a seeming reference to Germany's planned "Energiewende," or transition to renewable sources of energy.

Many different groups participated in the protest, with Greenpeace, Extinction Rebellion (XR) and cyclist awareness protesters Critical Mass at the forefront.

Those riding as part of the "Sternfahrt" cyclist demonstration blocked the motorways A661 and A648 on their journey to the IAA protest.

"Just under three-quarters of the 50 new cars displayed (at IAA) continue to use environmentally damaging diesel and petrol," said Greenpeace in a statement in support of the IAA protests.

The environmentalist organization referred to a report earlier in the week that showed the cars manufactured by just three German car companies, VW, Daimler and BMW, produced more C02 in a year than Germany as a nation produces in the same period.

The IAA was not available for comment at the time of the protest, with its Twitter account only advising attendees how best to approach and leave the Frankfurt exhibition hall due to the disruption caused by protesters.

German Chancellor Angela Merkel opened the show on Thursday with a warning on climate change, yet set out no plans for regulations, only asking the industry to invest more resources in producing affordable and sustainable electric cars.

'The planet's on fire'

The protest is a further sign of a snowballing global movement calling on world leaders and industry to take action against the destruction and degradation of the environment.

It comes a day after Greta Thunberg, the 16-year-old Swedish climate activist, brought her Fridays for Future environmental protest movement to the White House in the United States. Hundreds of protesters gathered and chanted, "The planet's on fire, Trump is a liar."

Worldwide environmental activist group Extinction Rebellion is planning a series of disruptive actions and protests for October, with European capitals including Berlin and London to be targeted.

The French interior minister has ordered an investigation into why police used tear gas on climate protesters. A widely shared video shows protesters being sprayed with tear gas after refusing to move from the bridge. (01.07.2019)