Opinion: End of the road for the International Motor Show

German Chancellor Angela Merkel opened Frankfurt's IAA motor show, likely for the last time. Not because her mandate is nearing an end, but because the car industry as we know it is history, says DW's Henrik Böhme. 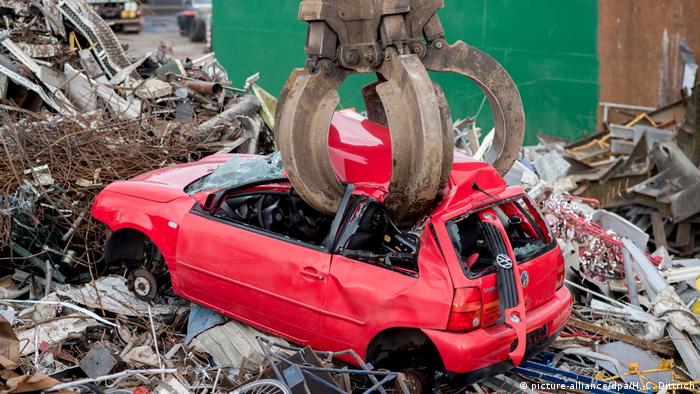 A trade fair being almost dead in the water even before its official opening is something new. Frankfurt's International Motor Show Germany (IAA) made it a first.

Following many attempts to reinvent itself with new concepts, the demise of the CeBIT IT expo dragged on for almost three years. The last desperate effort was holding the event in the warmer month of June, rather than in chilly March. But even that could not save it.

In Detroit, the same story can be seen. The North American International Auto Show, long held in January, and the first automotive event in the calendar was also moved to summer. Then car manufacturers discovered a digital trade fair in Las Vegas, which from then on became the preferred choice to exhibit their new models because smart cars belong in the new digitized era. Organizers in Detroit will give it another try next summer, but all signs point to the end being nigh.

So now it dawns on the IAA, Germany's automotive show par excellence — and the event has come under immense pressure on many fronts. Climate activists have threatened to blockade the show when it opens its doors to the public this weekend, and public debate in Germany on the future of individual mobility has suddenly become very fierce. The Fridays for Future movement has intensified it further. And in the wake of a deadly accident in Berlin involving an SUV, many are seeing the large vehicles as dangerous and unsuited for city driving.

The calls for change are not only coming from the familiar foes of the car industry. Above all, it is car manufacturers that want to see IAA get a makeover. Simply exhibiting the latest models, which are often electric and jazzed up with small-scale concepts, is no longer enough. The industry seems to have realized that its very survival is at stake, and that the cars are no longer considered the number one means of transport — because the future of mobility indicates cars as we know them will be just one of many options for consumers.

One only has to walk around the grounds of the auto show in Frankfurt to see the IAA fading away. Many exhibition halls are empty; where there are cars, there are fewer than ever before. The gaping exhibition areas have been cleverly concealed or hidden behind black curtains. More than 30 exhibitors canceled their stands altogether, and even the big names of the German car industry cut their presence back significantly.

The automotive industry is not only undergoing the biggest upheaval in history — it is in a state of crisis. And the scenes in Frankfurt speak to this. The IAA is a loud wake-up call; long gone is the splendor of the automotive golden age. This IAA will undoubtedly be the last, at least in the way we know it.

Read more: The transportation of tomorrow

The war on cars

Against this backdrop, it certainly seems like the party is over — and sure, they are overrated, but cars are not the devil. For decades, the auto industry has been a cornerstone of Germany's economy and was always able to convince consumers that bigger is better. It has worked, because demand for big cars remains huge. However, this could be owing to the fact that car companies are using their advertising budgets to market SUVs.

But now that VW, Mercedes, and BMW are making a large-scale transition to electric, the manufacturers say it is precisely the profits reaped by selling heavy-duty vehicles that are enabling them to switch over to more environmentally-friendly models.

Read more: Autonomous cars — When will our cars finally drive us?

No, we do not need strict regulations like in China, where the Communist party can set a fixed admission quota. In a free and democratic society, what we need are clever options to transform transportation. And no prohibitions.

There is no way of getting around the fact that cities are becoming denser, and that the demand for parking keeps rising. But that does not mean car drivers should necessarily get what they want. Pedestrians, buses and trains, bicycles have to be at the forefront, and once all of these have been factored in — if there is any space left — we can consider the car.

Up to now, automatic reflexes have reigned: Cars are getting bigger, so in turn we buy them, then build new garages, streets, and infrastructure to accommodate them. To wit: the latest Mercedes off-road vehicle is too wide to even fit in most car washes.

This automatism must stop, and serious thinking must start. It is evident that despite their efforts thus far to roll out e-cars, manufacturers have simply not caught up with the times. Why? Firstly, because the German energy revolution is moving at a slug's pace, and there is insufficient green electricity to run the cars. Secondly, the enormous demand for lithium is the cause of environmental damage elsewhere. South America is a particularly extreme example of this.

Moreover, Germany's prosperity is primarily centered around the successes of its auto industry. Millions of jobs depend on it. The argument that workers in the car industry could switch to the health care sector or become train drivers — what environmentalists have actually proposed — is completely out of touch with reality.

Despite the obvious issues with relying on vehicles powered by fossil fuels, we must think twice before pointing the finger at the average car owner as being the number one climate killer. It is the wrong approach and falls far short of gauging the bigger picture. Knee-jerk actions are not a useful guide when it comes to answering the essential questions for the future.

From diesel fraudster to pioneer of sustainable mobility: that's how German automotive giant Volkswagen wants to transform itself. The e-cars are also to be produced in a carbon-neutral way. How can this be achieved? (19.02.2019)

Opinion: Joe Biden's Cabinet picks — cause for optimism 12h ago

Opinion: When will India give women the right to bleed? 12h ago