Germany hopes to mine lithium, the white gold of e-mobility | Business| Economy and finance news from a German perspective | DW | 19.08.2019

Germany hopes to mine lithium, the white gold of e-mobility Hans-Andre Tooren is a longtime municipal administrator in the Saxon community of Zinnwald-Georgenfeld near the German-Czech border, some 50 kilometers (31 miles) south of Dresden. His and his wife's piece of land happens to be in an area that's attracted the interest of geologists and a mining company.

Tooren lives in a place where lithium abounds, the new white gold of the automotive and other industries. The chemical element is needed for batteries in electric cars, but is also required in steadily rising quantities for glass ceramics, ceramic glass cooktops and a number of lubricants, to name but a few fields of application.

Sitting on a treasure like this, Tooren might have become rich overnight, had he lived in a different country. But here in Germany, mining laws stipulate that all ore deposits found belong to the state and not to the people owning the land above the deposits. Not that Tooren bears a grudge, though. 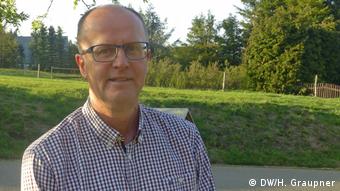 "Having been a municipal administrator, I've dealt with the country's mining law and knew right from the start that I should not expect to strike it rich as a private person," he told DW.

"But of course I hope that our community as a whole will profit via higher commercial tax revenues once mining gets underway. First investments by the mining company have already gone toward building a big Christmas season pyramid as a tourist attraction. It's little steps like these that mean a lot for a village of just a little over 400 people."

The mining company Tooren mentioned is Deutsche Lithium Ltd., whose CEO Armin Müller is confident that now that a feasibility study is on the table, financing details for the lithium project can be sorted out in due course. When everything goes according to plan, Zinnwald could see the revival of a roughly 750-year-old mining tradition. For centuries on end, the region extracted tin and tungsten. Now all that will be replaced with lithium. 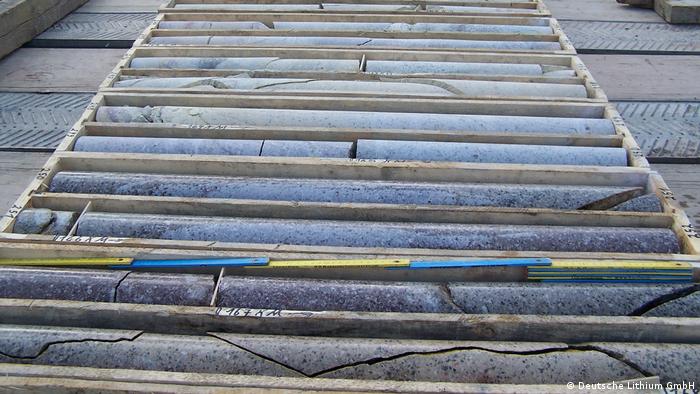 "At the moment, we plan to mine 522,000 tons of lithium-containing ore per year," Müller told DW.

"We'll use the material to get 125,000 tons of zinnwaldit concentrate per annum. This will then be processed to get 5,100 tons of lithium fluoride annually. There's enough in the ground to let us do this for 30 years — that's also the period we have a mining license for."

Even though Zinnwald doesn't boast the amount of lithium in the ground that the world's largest exporters have at their disposal, growing demand worldwide in principle speaks in favor of a domestic initiative, says Michael Schmidt, a geologist and senior analyst from the Berlin-based German Mineral Resources Agency (DERA) at the Federal Institute for Geosciences and Natural Resources.

"Lithium demand has been rising exponentially lately, particularly in the past 3-4 years — that's because of the global e-mobility drive and the mounting storage of renewable energy, like solar and wind," Schmidt told DW.

Lithium: The white gold of e-mobility

So far, Germany has been importing the raw material from remote places in Chile, Argentina and Australia. While imports will still be needed in the future — and are also expected to come from Bolivia soon — the Zinnwald project, as well as others across Europe, could help ease the pressure, Schmidt argues.

"If a company here runs the mining business and controls production costs in a way that enables it to stand its ground on the global market, it has every right to exist," he said.

"It wouldn't be a bad thing, given the oligopolistic lithium market right now — three nations cover some 90% of lithium mining. This tells us that diversification would make perfect sense for industry and in terms of pricing."

Schmidt's view is echoed by Doris Schüler from the Freiburg-based nonprofit Institute for Applied Ecology.

"The exploitation of deposits within the European Union, particularly lithium, nickel and cobalt, should be supported," she said.

"Considerable imports would nevertheless be required to meet primary demand in the bloc. But those imports could be reduced, and mining in the EU would go hand in hand with regulations to protect the environment."

The zinnwaldit mineral only contains about 1.6% lithium. That compares poorly to spodumene in Australia, which contains about twice as much, meaning that twice as much ore will have to be mined in Zinnwald to get the same amount of lithium in the end. This makes operations here more expensive, but Deutsche Lithium CEO Armin Müller points to a decisive cost-saving factor that most others don't have. 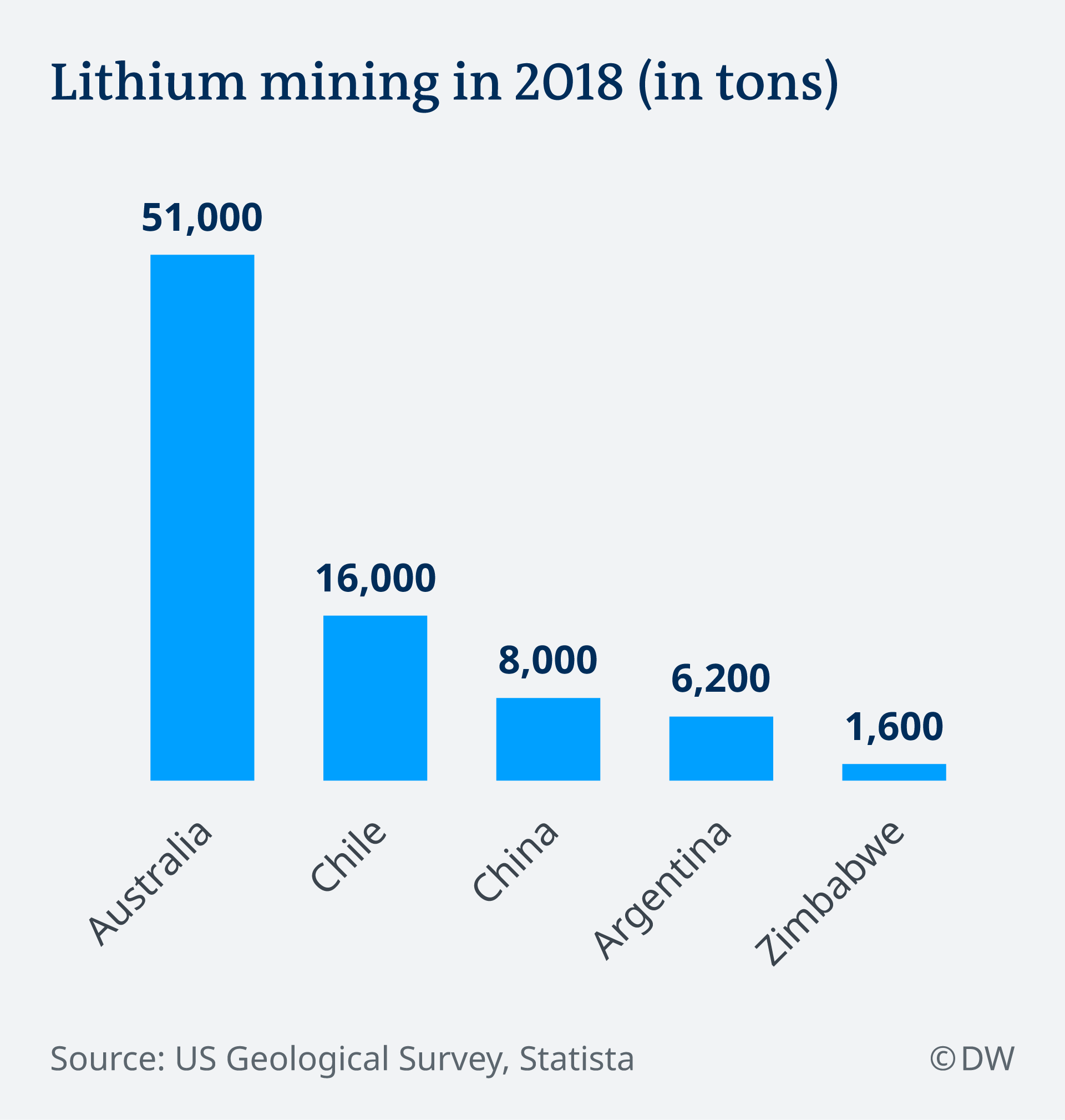 "This means you have to spend a lot of resources on getting long transport routes to faraway chemical processing plants up and working. Such plants can mostly be found in Asia where lithium carbonate is processed," he explained.

"Now, we don't have to produce lithium carbonate at all, we don't need this interim procedure as we can directly process our mineral concentrate and make products such as lithium fluoride or other industry-ready compounds. This is because we can use a chemical plant that will be just around the corner in a place called Freiberg, which is only 49 kilometers (30 miles) away from the deposit."

Geologist Michael Schmidt says that analyzing the impact of the e-mobility drive on the environment is important. 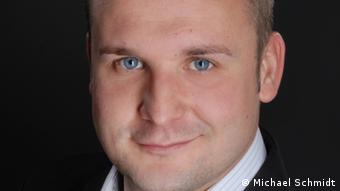 "Short transport routes are essential," he said while talking about lithium mining in general.

"After all, the initial idea behind e-mobility was to reduce the CO2 footprint, meaning it would of course make sense to decrease that footprint also during the production of electric cars. If battery cells are to be produced in Europe, it makes sense to get the required resources from places nearby."

Zinnwald-Georgenfeld resident Hans-Andre Tooren is confident that a revival of mining activities will not scare off tourists.

"We don't think tourism will be affected in the region," he said.

"After all, we're not talking about open-cast mining here. Yes, there will be a new building in nearby Altenberg where the stones from the mine will be pulverized. Trucks will then carry the material to places further away, but that's the only way tourists will know that mining is going on here at all."

Armin Müller sees it exactly the same way. He's keeping his fingers crossed that outstanding financing issues can be resolved in due course.

"If everything goes according to schedule, we'll have our financing plan sorted out by the second quarter of 2020," Müller said.

"After that we'll need another 18-20 months to prepare the mine and processing factories. In other words, I hope mining can kick off in the first or second quarter of 2022."