Will Europe make its own e-car battery cells? | Business | Economy and finance news from a German perspective | DW | 10.04.2018

Will Europe make its own e-car battery cells?

The future of Europe's carmakers depends on reliable supplies of cheap lithium-ion cells, a key component of e-car batteries. But such cells are nearly all made in Asia. Does Europe need its own Li-ion cell supply? 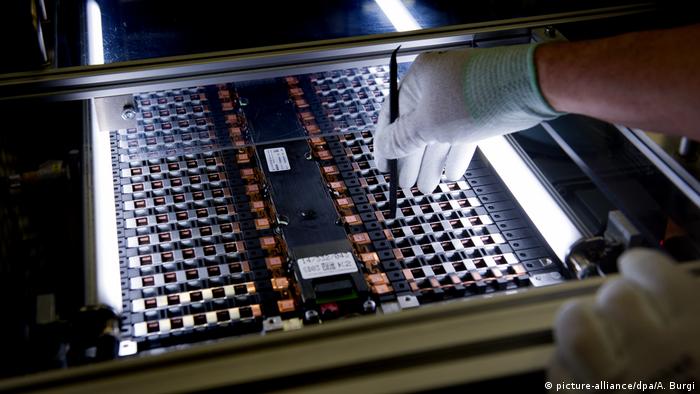 Imagine you're a strategist working for a major European carmaker. You've been tasked with thinking broadly about the future of e-mobility and its implications for your company, which currently produces over two million automobiles a year, all but a few thousand of them powered by internal-combustion engines (ICEs). What are the key strategic moves your employer must successfully implement, to ensure it ends up among the winners in the emerging e-mobility revolution?

First, you recognise that E-cars are better than ICE cars in several ways, and not as good in just three ways.

E-cars are better in that they have smoother, faster, much more responsive acceleration. They're quieter. They don't generate air pollution at point-of-use; they can result in low carbon emissions if they're powered by renewable or nuclear electricity; and they're much more energy-efficient.

A further advantage of e-cars is that they're lower-maintenance and more durable. That's because they have only a few moving parts — just a few dozen in total — whereas ICE cars usually have upwards of 2,000. 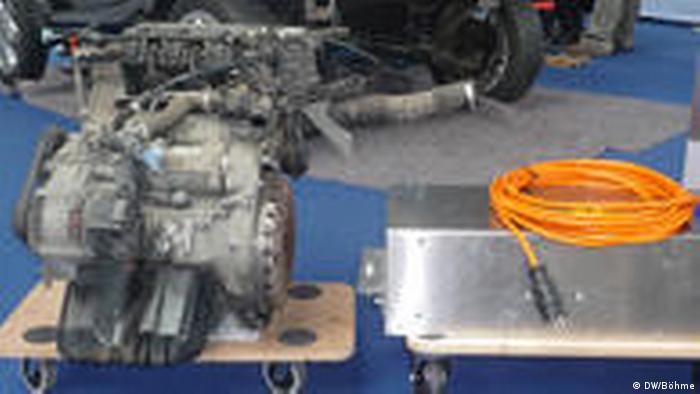 Here, a 'Smart' car has had its internal combustion engine (at left) removed, in preparation for replacing it with an electric motor (at right). Analogously, European car-makers will have to replace their ICE vehicle manufacturing capacity with battery-powered electric vehicle making capacity.

Electric motors are extremely simple devices. ICEs, by contrast, are very complex. That difference means that e-cars, once they're mass produced, should in principle be much cheaper to make, and hence to buy, than ICE cars.

But that leaves out the problem of the fuel storage system.

As your company's strategist, it dawns on you that if any competitor anywhere in the world solves all three of these problems convincingly, e-cars will quickly become better and cheaper than ICE cars in every respect, and your company's ICE-based business model will instantly become obselete.

Several companies are developing "solid-state" battery technologies, claiming that these will be safer, due to the absence of liquid electrolytes, as well as higher in energy density.

If the claims prove realistic, the next generation of e-cars, available from the mid-2020s, may have driving-ranges in excess of 800 kilometers (497 miles), and could be rechargeable in minutes rather than hours. 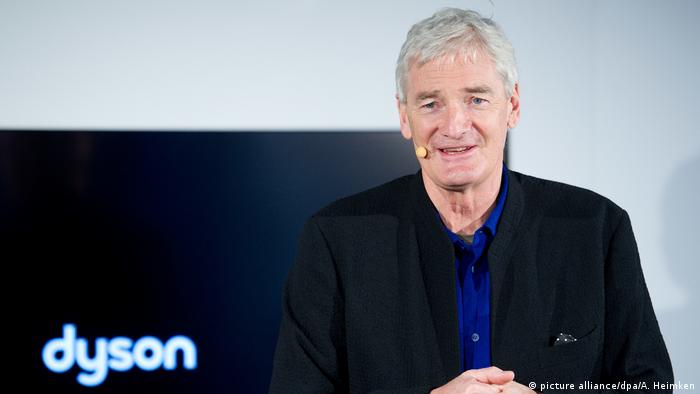 Sir James Dyson is convinced the Ann Arbor startup Sakti3 could revolutionise lithium-ion batteries, and hence the future of automobiles, with its solid-state battery design. He has helped finance the company. Sakti3 isn't the only such startup. Volkswagen-backed QuantumScape of Stanford, California is another.

China is implementing an automotive-sector industrial strategy aimed at achieving dominance in e-car manufacturing. In support of that aim, starting in 2019, China will require at least 10 percent of all new cars sold by major carmakers in China to be low-emission vehicles, which analysts expect will hugely expand Chinese e-car production, and hence drive down the price of Chinese-made e-cars.

All of the leading makers of lithium ion cells for e-car batteries are Asian, based in China, Japan, or South Korea. There is presently no major European supplier of the lithium-ion cells which are the key component of e-car battery packs, leaving European carmakers heavily dependent on importing the cells from Asian suppliers. 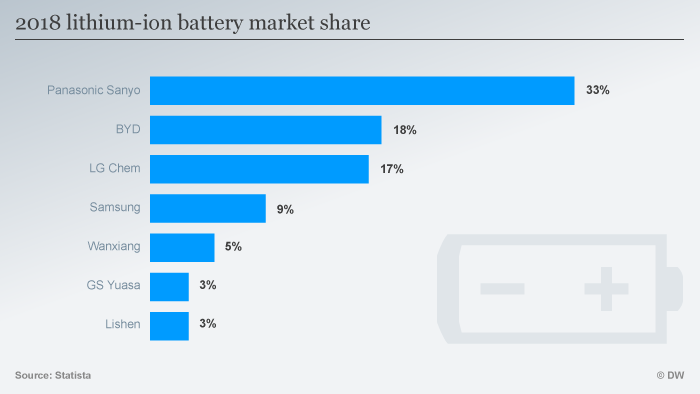 Massive regulatory and financial support for the development of a domestic electric vehicle market makes sense for China, which — like Japan and South Korea before it 1— is pursuing a long-term state-capitalist economic development strategy. For one thing, China hopes to benefit from building a major EV production industry.

China is heavily dependent on oil imports, which could be choked off at any time by hostile action 1—- for example, if the Indian, Japanese, or US Navy were to decide to interrupt oil tanker supply routes from the Middle East. Yet China has abundant sources of domestic electricity generation, with numerous coal-fired power plants increasingly supplemented by nuclear power stations, wind farms, and solar photovoltaic panels. Moving rapidly to e-cars will make China much less vulnerable to energy supply-chain disruption.

Moreover, Chinese leaders are not in denial about the risks of climate change. They know that addressing it will require moving away from fossil fuels as quickly as possible. 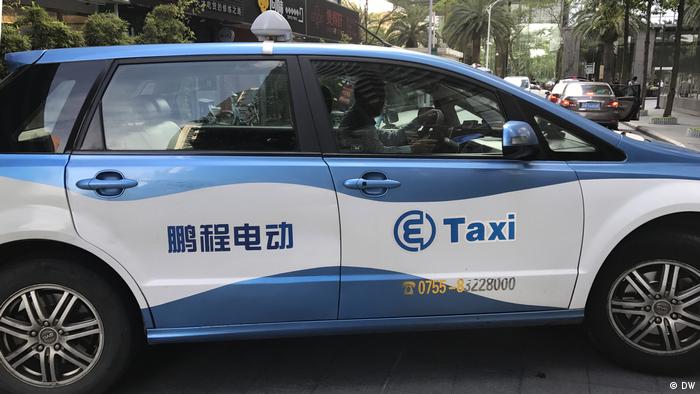 All taxis in the Chinese city of Shenzhen will be electric cars, the government has decreed, by the end of 2018. Here, an e-taxi built by Chinese carmaker BYD, a company with global ambitions.

Electric motors, car bodies and components like seats or dashboards are already mass-produced commodities, available from numerous parts suppliers. No country can obtain a durable advantage. The battery packs are the key variable.

For European carmakers to survive the coming flood of global e-car competition, they will need access to a secure supply chain of technologically cutting-edge fast-recharging, durable, high-capacity battery packs, at globally competitive prices. Without that, they will be driven out of business.

With that in view, it seems unwise to leave European carmakers dependent on Asian suppliers of the lithium-ion cells from which e-car batteries are made.

German industry and government have recognised this, which is why they were counting on German electric goods maker Bosch to get into the business of developing and manufacturing lithium-ion battery cells for the German e-car industry. But in late February, Bosch announced that it would withdraw entirely from the battery-cell business. The reason: Bosch's management believes it will be very difficult to make a profit on battery cell production, given low-cost Asian competitors.

The lesson here is clear: What makes strategic sense for Europe as a whole doesn't necessarily make sense from a single company's financial risk point-of-view. Europe needs to find a way to align the financial interests of European corporates with Europe's strategic imperatives. 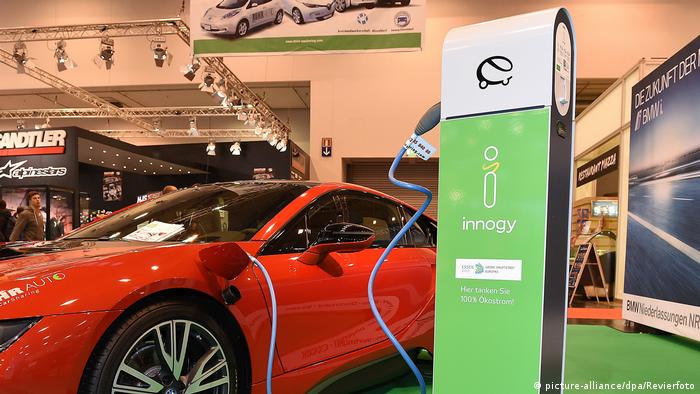 Maroš Šefčovič, who leads the European Union's "Energy Union" project for the European Commission, has been pushing for a European consortium to be formed to produce lithium-ion battery cells in Europe at the scale needed to supply the European automotive industry.

"Our objective for the European Union Battery Alliance is simple, but the challenge is immense,” said Šefčovic at the EU Industry Days Forum in Brussels on February 23. "We want, almost from scratch, to create a competitive and sustainable, battery cell manufacturing in Europe supported by a full EU-based value chain."

The Alliance has scaled back slightly from its original plans for an industry-spanning consortium, but Šefčovič said he hoped it would include ten to twenty large factories that can provide battery cells, adding that the European market for e-car batteries could reach 250 billion euros ($309 billion) per year from 2025 onward.

Commissioner Šefčovic's EU Battery Alliance plan proposes to define cell manufacturing as a strategic industry, and set about ensuring the necessary production capacities will be in place to ensure Europe's carmakers will not be left vulnerable to supply chains outside Europe. 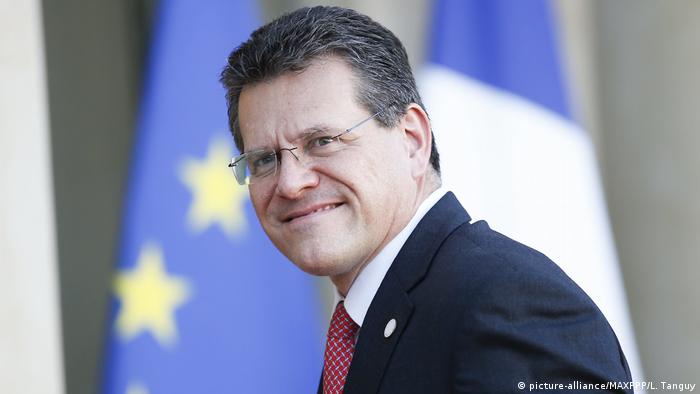 Maroš Šefčovic of Slovakia is Vice-President of the European Commission in charge of the Energy Union, one of the EU's most important projects.

What remains unclear, however, is how this grand plan is to be financed. One option might be for the European Union to implement a "feed-in tariff" guaranteeing a profitable price per MWh of battery cells produced in Europe, for a defined annual quantity of cells large enough to ensure battery-makers will have sufficient sales volume to cover their fixed investment costs.

Such a system might have prevented Bosch from deciding, in late February, to drop its own plan to get into e-car battery cell manufacturing.

This seems like a state-subsidized measure, and these are frowned upon in Europe. European policy-makers have traditionally been obsessed with enforcing a strict division between state and corporate finances. Most forms of state subsidy are prohibited by European Union treaty.

But Europe's policy-makers need to decide whether they can afford to continue opposing state or European Union subsidies to key industries, in an era when European industry faces global competition from Chinese firms actively supported by Chinese state subsidies and strategies.

British technology firm Dyson has joined the race to develop a battery-powered electric car. The company is investing billions of pounds to build an electric vehicle that it says will be launched in 2020. (26.09.2017)

Together with its joint venture on the ground, Japanese automaker Nissan is to make a multi-billion-dollar investment in the production of e-cars in China. Beijing's e-car quota system goes into effect next year. (05.02.2018)

The Chinese government has adopted a 'Made in China 2025' economic development strategy which is emerging as a huge risk to Germany's economic base, says economist Christian Rusche from the IW think tank in Cologne. (18.08.2017)