From diesel fraudster to pioneer of sustainable mobility: that's how German automotive giant Volkswagen wants to transform itself. The e-cars are also to be produced in a carbon-neutral way. How can this be achieved? 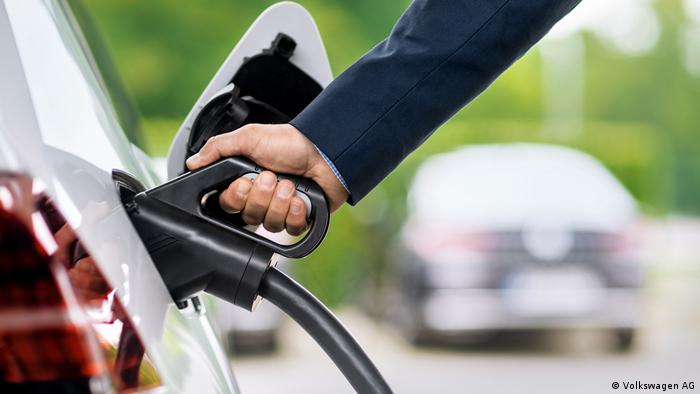 Sometimes it makes one flinch when hearing Volkswagen (VW) managers say things like: "Global warming is in full swing and VW is part of the problem." It was said by Ralf Pfitzner, who is responsible for sustainability at the VW Group.

"The I.D. will be the group's first car to be produced in a carbon-neutral way," Thomas Ulbrich, member of VW's management board responsible for e-mobility, said at a symposium organized by the company in Dresden.

It's not even been four years since the company was plunged into an existential crisis following revelations that it had installed faulty software in its diesel cars to make them appear more environmental friendly. The scandal tarnished the company's reputation and has cost it billions of euros in fines. To date, this has only been dealt with in court in the USA. Courts in Germany have yet to begin hearings on the lawsuits filed against the company.

Herbert Diess, the new boss of the Wolfsburg-based auto giant, has prescribed a "cultural change" for the group. "We are driving the company toward clean mobility," that's Diess' target for the firm's 650,000 employees worldwide. To achieve this, German magazine Der Spiegel reported that the company is also planning to introduce an internal carbon tax, in an effort to create incentives for reducing CO2 emissions. 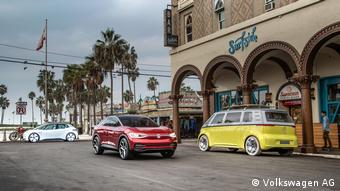 These I.D. series vehicles are still prototypes, but they occupy center stage when it comes to VW's e-mobility strategy

Volkswagen's goal is to reduce the CO2 emissions of its vehicle fleet to zero by 2050, and the cars are also to be produced in a carbon-neutral manner. The company intends to offset its greenhouse gas emissions by climate protection measures. "If we want to achieve this goal, the changes must begin now," says Christian Senger, head of VW's e-mobility production series. By 2023, VW will have invested €11 billion ($12.4 billion) in the digitization of vehicles and plants as well as in CO2-neutral production right through to its suppliers. Of this amount, €9 billion are direct investments in electric mobility.

A first VW plant is currently being rebuilt without interrupting operations: In Zwickau, in the German state of Saxony, where the conventional Golf is still running off the production lines, the I.D. is to be produced starting from the end of this year. It is to become the nucleus of an entire electric family.

Zwickau serves as a laboratory: the factory has already been trimmed for energy efficiency in recent years. With an increase in production of three percent over the past eight years, CO2 emissions have been reduced by 66 percent. And that's not all: Liendel Chang, who takes care of the environmental aspects of production processes, said that we "really take a close look at everything," referring to the efficiency of the ventilation and heating of the assembly halls or the compressed air supply to the assembly lines, among other things.

From Zwickau into the world

Zwickau is expected to be the pioneer, and other factories will likely have to quickly follow in its footsteps. They include the plant in Emden on the North Sea coast, where the mid-size car Passat is currently still being produced; the plant in Hanover, where the firm's vans are being made; Mlada Boleslaw in the Czech Republic, home to the sister brand Skoda; and finally two plants in China as well as the US plant in Chattanooga, in the state of Tennessee.

At VW, executives point out that 37 percent of the total energy supply for operating the group's plants, numbering more than 120 worldwide, currently comes from renewable sources.

But production in VW plants is just one side of the coin. The situation becomes complex if one takes into account the role played by the group's suppliers. And VW has plenty of them: around 40,000 worldwide.

To bring about meaningful change, after all, the entire value chain needs to be sustainable, not only in terms of CO2 emissions, but also in terms of compliance with social standards.

But that means intervening much more broadly and deeply in complex processes. "Sustainable supply chains will become a 'hygiene factor,'" says Marco Philippi, who's responsible for procurement in the group. The aim is to commit suppliers to sustainability, he underlined. "We will exclude suppliers who do not meet our requirements." 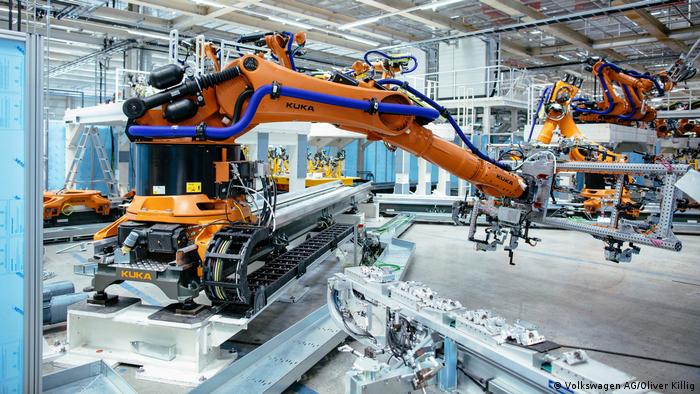 VW is investing €1.2 billion in its Zwickau plant

Climate protection as a competitive issue

Of course this is just an announcement for now. Steel production, for instance, is still an extremely CO2-intensive process. And VW will certainly not be able to part with its steel suppliers. The company faces a similar problem when it comes to the manufacturers of battery cells. VW buys most of these basic battery elements in Poland, where most of the electricity is generated from coal. But VW says its Polish suppliers use green energy for cell production.

So there is still a lot to do for VW on its way to carbon-neutral production. But VW wants to become a pioneer, and where the sustainability targets cannot be achieved directly, the group wants to invest in climate protection projects as compensation.

To this end, the company counts on the support of Georg Kell, former founder and director of the UN Global Compact — an initiative for sustainable development under the auspices of the United Nations and now spokesman for VW's Sustainability Advisory Board. "Only with the de-carbonization of production will companies have a chance in the future. This will become the central theme of competition," he said.