China is most important battleground for carmakers | Business | Economy and finance news from a German perspective | DW | 07.01.2019

The automotive industry is coming under increasing pressure worldwide due to a growing focus on electric mobility, autonomous driving and digital services. Competition from China is also on the rise. 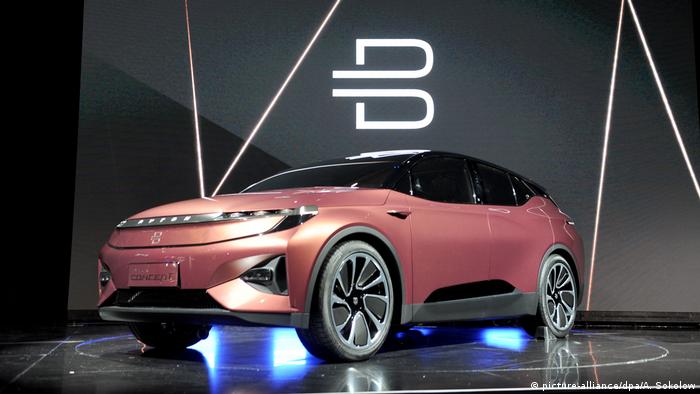 Newcomers and startups are increasingly setting the pace when it comes to developments in the auto industry. This has forced the sector's top dogs to jump on the bandwagon of change so as not to be left out of the widely anticipated imminent transition in human mobility. Many experts are convinced that these developments will lead to a breakthrough in electromobility.

For such a future, however, startups and companies that are small and agile appear better suited and equipped than the old and established industry titans.

Read more: How Volkswagen is gearing up to be an electric car leader

Even if Tesla cars can already be seen on the road in Germany, the American company is still one of the newcomers to the market. Even though Tesla has yet to put in place a functioning routine when it comes to its production of vehicles in Germany, it's ramping up efforts to increase its sales in the country.

"We are expecting Tesla to emerge as a clear market leader in electric cars in Germany in 2019," said Ferdinand Dudenhöffer, a renowned expert from the Center for Automotive Research (CAR) at Germany's Duisburg-Essen University. 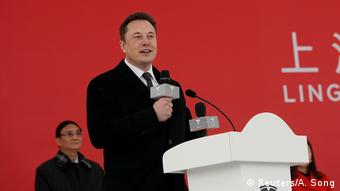 On Monday, Tesla founder and CEO Elon Musk laid the foundation stone for a new Gigafactory in Shanghai

The analyst pointed out that in the United States, the world's second-biggest car market, Tesla has sold 25 percent more vehicles than the entire Audi brand in the last three months. "In spring 2019, Model 3 will come to Europe, which will also rekindle the hype surrounding Tesla in Germany," Dudenhöffer told DW.

For Tesla, the Chinese market is even more important than the German market. The American company is investing heavily in the Asian giant. On Monday, Tesla founder and CEO Elon Musk laid the foundation stone for a new so-called Gigafactory in Shanghai. At this factory, Tesla plans to produce not just vehicles, but also the required batteries. By the end of the year, Model 3 cars are expected to roll off the production line there. In doing so, Musk intends to achieve a breakthrough on the world's largest car market.

Another startup that the German carmakers should pay attention to is the Chinese firm Byton. It was, in fact, founded by former BMW managers.

Although they have only come up with prototypes so far, the company is planning to start production of an electric SUV by the end of 2019. It's initially targeted at the Chinese market. Byton's plant in the Chinese city of Nanking is almost ready, the company's CEO Carsten Breitfeld told German business daily Handelsblatt. Test vehicles have been in production since last May, he noted.

At the Consumer Electronics Show (CES) in Las Vegas, one can get an impression of the kind of vehicles that will penetrate the US and some European markets starting from the third quarter of 2020.

Last year, Byton presented a prototype of its electric SUV M-Byte there (main picture). This year, the company is putting on display the production-ready interior of the model. The exterior design has yet to be finalized. 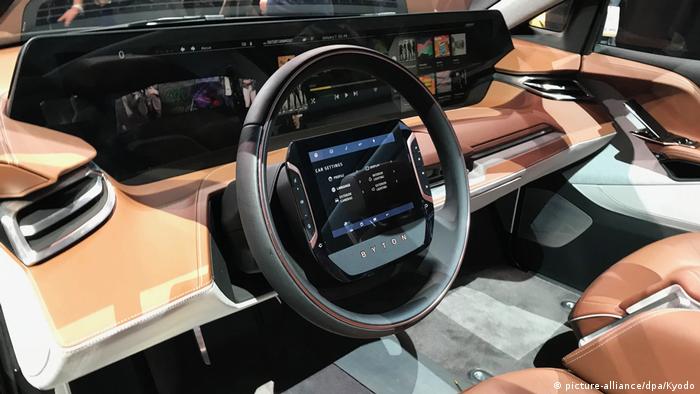 In Las Vegas this year, Byton is putting on display the production-ready interior of its electric SUV M-Byte

Software and services, not just metal and motors

"Building and selling cars is an outdated business model," Breitfeld declared in Las Vegas. Instead — similar to what happened in the smartphone business — they will use car hardware as a platform to sell digital and driving services to customers.

"This is the actual business model of the future, that's what we've built the company for," said Breitfeld. "A company with 150,000 or 250,000 employees will find it extremely difficult to completely restructure its business model," he underlined, adding that startups like Byton are better suited and equipped to drive this change.

And what will this transition mean for the old behemoths? Even the traditional carmakers want to expand e-mobility and digital services, and are courting attention in Las Vegas.

The CES, once focused on consumer electronics, has increasingly morphed into an auto show in recent years.

Traditionally, the focus in Las Vegas has been on networked cars and autonomous driving. Brands like Audi, Daimler and Ford, among others, are again in Las Vegas to take part in this year's event.

Volkswagen is staying away from CES this time around, despite the company's increased focus on electromobility, networked cars and autonomous driving.

Volkswagen also intends to maintain its strong position in China. In a move that reflects the Chinese market's significance for VW, CEO Herbert Diess himself on Monday took over the management of the group's China business. "The future of Volkswagen will be decided on the Chinese market," Diess said in Beijing on Monday.

Global carmakers have for years brought their technology to the Chinese market from outside, Diess noted. But now, he added, innovation is increasingly taking place directly in China, where capabilities in the areas like e-mobility or self-driving cars are already "well developed."

VW has so far sold over 40 percent of its cars in China. This year, doing business is likely to be more difficult, as the Chinese government now requires carmakers to adhere to a quota for sales of electric cars. If a manufacturer sells too few such cars or hybrids, it faces penalties.

China's slowing economy also poses a challenge. This will likely further intensify the battle between the traditional carmakers and newcomers for market share. And as far as electric cars are concerned, German manufacturers are not so well positioned yet.

Volkswagen therefore announced in November 2018 that it planned to direct more resources toward developing e-mobility. Over the next five years, Volkswagen plans to invest €44 billion ($50.5 billion) in electric mobility, autonomous driving, mobility services and digitization. 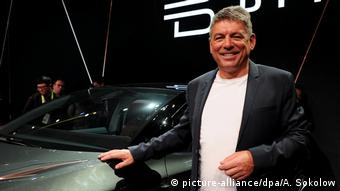 The goal is for electric cars to account for one-fifth of its production in Western Europe by 2025. While VW now produces six battery-powered models, it aims to raise the figure to more than 50 by 2025.

"We will be cheaper than Tesla and we will achieve economies of scale," VW CEO Diess optimistically told industry newspaper Automotive News.

Internet companies are the most valuable companies in the world today, but, Diess said, "My forecast is that the title will be held by a car company in 10-20 years' time." That's because in the end people would spend more money on mobility than on communication, he underlined. If that turns out to be true, the big question is: which car company will win the race ?

With the Consumer Electronics Show in Las Vegas around the corner market researcher Steve Koenig weighs in on the long-awaited arrival of 5G, the role of data and surprising trends at the world's largest tech trade show. (07.01.2019)