The French interior minister has ordered an investigation into why police used tear gas on climate protesters. A widely shared video shows protesters being sprayed with tear gas after refusing to move from the bridge. 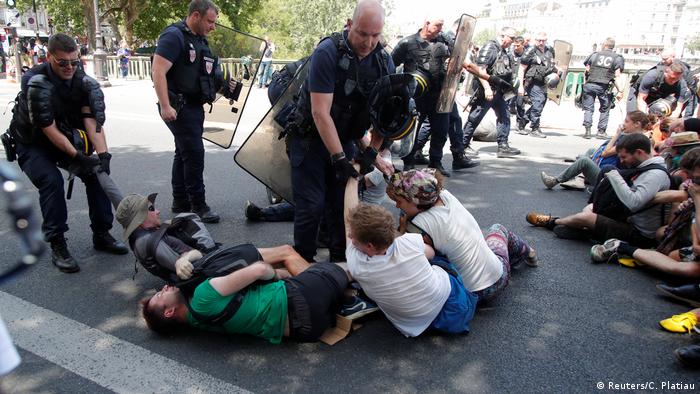 Police in France faced criticism on Monday after a video of officers spraying tear gas on climate protesters staging a sit-in on a bridge emerged online, prompting the French interior minister to call for an investigation.

The protest over the French government's environment policies was held by members of the Extinction Rebellion group at the Pont de Sully bridge during sweltering heat on Friday.

A video shared on Twitter and since widely broadcast on news channels shows a group of protesters sitting on the ground with their arms linked and heads bowed after they had refused orders to vacate the bridge.

When they refuse to move, officers spray them with hand-held tear gas canisters, while the demonstrators try to protect their faces. The video shows one officer forcibly remove a protester's protective goggles and sunglasses.

The officers are then seen dragging the protesters off the street one by one.

A police officer at the scene estimated about 90 protesters had taken part, while Extinction Rebellion put the number at 200, the Guardian reported.

Interior Minister Christophe Castaner ordered an investigation into the incident.

The riot police and the police chief have been asked to submit a report on the "modalities" leading up to the evacuation of the demonstrators "in order to restore traffic" in the center of Paris.

Castaner said that the French riot police used loudspeakers to ask the protesters to move. He added that the "very radical" demonstrators refused the order, and the riot police had no choice but to remove them one by one. 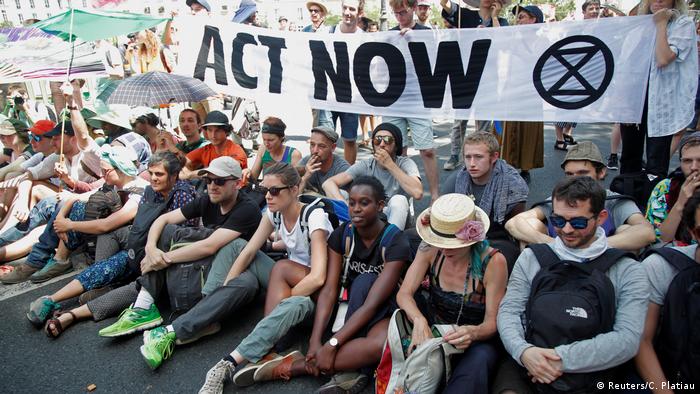 France's Environment Minister Francois de Rugy told Radio France International (RFI) that he had watched a video of the incident and the use of tear gas was justified.

Barbara Pompili, a member of the ruling La Republique en Marche, said she was "shocked" by the images and hoped the investigation would "shed light on what happened," RFI reported.

The Paris police department said the officers had intervened to stop the protesters from blocking traffic and that the demonstrators had been ordered "several times" to move. It said two people were arrested.

The video received condemnation both in France and abroad, with Sweden's teenage climate activist Greta Thunberg tweeting a link to the video with the words: "Watch this video and ask yourself; who is defending who?"

The Extinction Rebellion group first launched in Britain and organizes acts of civil disobedience to draw attention to climate issues.

Last month, the group took part in the blockade of an open-pit coal mine in Germany and protests held in London in May brought parts of the British capital to a standstill.

Each evening at 1830 UTC, DW's editors send out a selection of the day's hard news and quality feature journalism. You can sign up to receive it directly here.DW Newsletter Registration.

The campaigners have sent the keys to unlock them inside letters to 13 government ministries. The activists are asking Chancellor Angela Merkel to declare a "climate emergency." (11.06.2019)