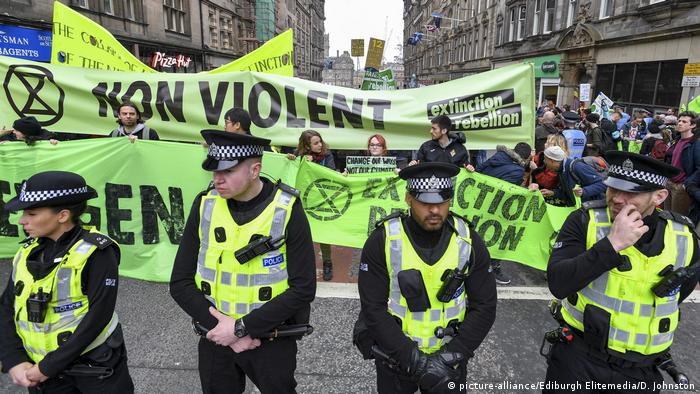 More than 200 people were arrested during climate change protests in London that brought parts of the British capital to a standstill, police said Tuesday.

The majority of people arrested were held for breaching public order laws and blocking a highway. Three men and two women were arrested at the UK offices of energy company Royal Dutch Shell on suspicion of criminal damage. Campaigners daubed graffiti and smashed a window at the Shell Centre building.

Police said the rallies caused significant disruption to 55 bus routes and affected roughly 500,000 people. "At this time, ongoing demonstrations are causing serious disruptions to public transport, local businesses and Londoners who wish to go about their daily business," a police spokesman said.

The protests were organized by the campaign group Extinction Rebellion, which was established last year in Britain by academics and has become one of the world's fastest-growing environmental movements. 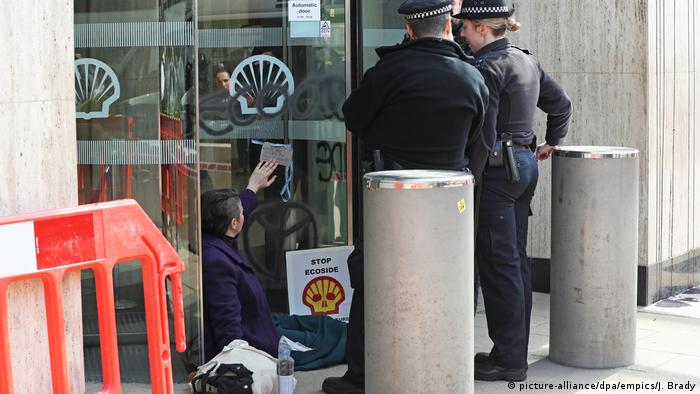 A protester glued herself to the Shell building

The protest saw more than a thousand people block off central London's Waterloo Bridge and lay trees in pots along its length. Later, people set up camps in Hyde Park in preparation for further demonstrations throughout the week.

Police had ordered protesters to confine themselves to a zone within Marble Arch, a space at the junction of Hyde Park, the Oxford Street main shopping thoroughfare and the Park Lane street of plush hotels. 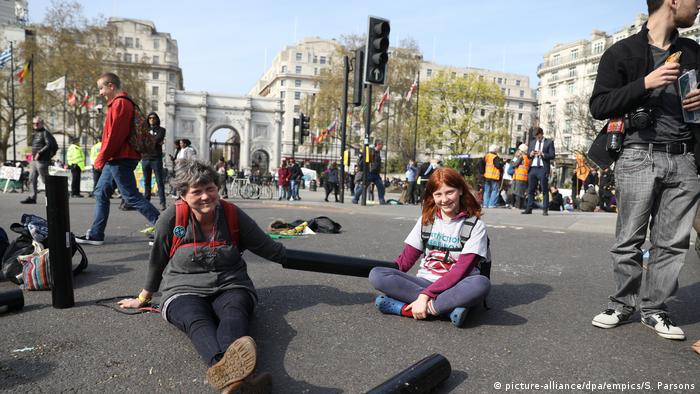 Mother and daughter climate protesters at Marble Arch in London

Spokesman for the protesters James Fox said the group had attempted to maintain a blockade overnight at four sites in central London before the police came to impose the new restriction.

People were arrested "mostly at Waterloo Bridge where the police came to try to stop everyone, but there were too many of us", he told AFP.

Fox said the protesters attached themselves to vehicles and to each other using bicycle locks.

"We have no intention of leaving until the government listens to us," he said. "Many of us are willing to sacrifice our liberty for the cause."

More than 40,000 people have rallied in the streets of the French capital, a day after a global student march against climate change. Unlike the yellow vest reboot which turned ugly, the environment march was peaceful. (16.03.2019)

How many millions of people will be forced to leave their homes by 2050? This documentary looks at the so-called hotspots of climate change in the Sahel zone, Indonesia and the Russian Tundra. (14.03.2019)

Though renewables played a role in the 4.2 percent drop it has largely been attributed to warm weather. Despite this good news the country is certain to miss its 2020 target of reducing emissions by 40 percent over 1990. (02.04.2019)