Extinction Rebellion: The activists risking prison to save the planet | Global Ideas | DW | 15.04.2019

Extinction Rebellion: The activists risking prison to save the planet

In the face of runaway climate chaos, governments around the world are in denial, say the activists hoping to land themselves in jail in defence of our planet — and the survival of our species. 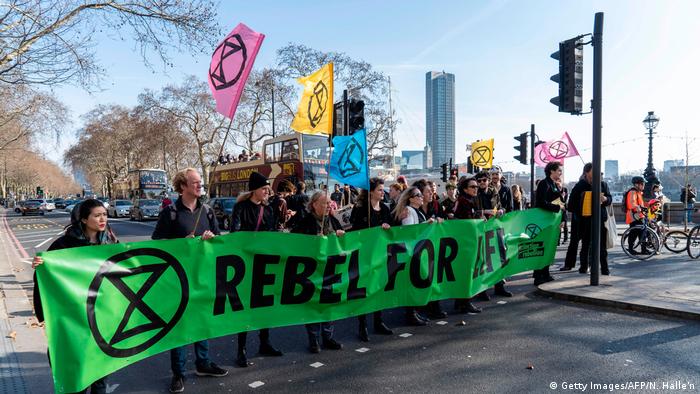 Many environmentalists — particularly the major international NGOs — have long argued that frightening people will only put them off engaging with climate protection. If the problem feels too big, we feel hopeless and switch off to think about something else.

But with scientists telling us that the planet's sixth mass extinction is already underway, and that we have scarcely more than a decade to avert devastating, irreversible climate change, a growing number of activists now believe it's too late to sugar coat the the truth.

This week, they will be taking to streets around the world in acts of mass civil disobedience, with the message that unless we take immediate action humankind itself faces extinction.

"Emissions are still going up, so we need to disrupt normal life," says Nick Holzberg, who works full time for Extinction Rebellion in Berlin. "The only way to do that is peaceful civil disobedience."

Extinction Rebellion first emerged in fall last year, when thousands of demonstrators took to the streets of London. UK "Extinction Rebels" have since occupied bridges over the Thames and stripped off in the British Parliament. And their movement has expanded to 35 countries around the world. 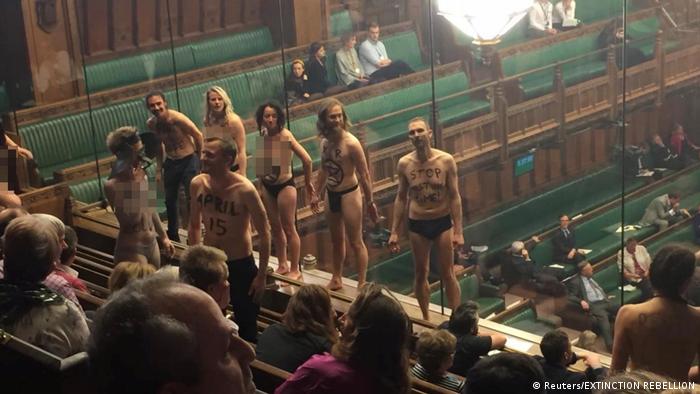 Like school climate striker Greta Thunberg, who has repeatedly told political leaders she wants them to act like the house is on fire, Extinction Rebellion believe fear is the only thing that will motivate changes big enough to give the world as we know it a chance of survival.

"This is seriously our last opportunity. It is an emergency," says Virginie Gailing, a French designer and Extinction Rebel living in Berlin.

The group is demanding that governments declare a "climate emergency," to shift into a crisis mode where "business as unusual" is suspended to make climate protection the priority.

More concretely, they want governments to commit to carbon neutrality by 2025 — instead of mid-century as the European Union and many national governments are aiming for.

With little faith in governments taking such radical action alone, Extinction Rebellion is also demanding a "people's assembly" to oversee the transition.

Extinction Rebellion takes inspiration from the US Civil Rights Movement, and the non-cooperation led by Mahatma Gandhi that saw over 60,000 ordinary citizens jailed in the peaceful struggle for Indian independence.

Dozens of "Extinction Rebels" have already been arrested in the UK and could face jail time. And for many of the Rebels, that's the aim. Leading activists in the movement argue that with enough ordinary citizens behind bars, the media, governments and the wider public will be forced to pay attention.

From parties to prison

Extinction Rebellion Germany first came together in December. They have several hundred members and hold regular meetings and training events. They coordinate via social media, meet in community centers and cafes, and put on talks in nightclubs.

On Monday, they plan to blockade bridges over the River Spree in Berlin and follow up with a full week of die-ins — where activists play dead in a public space — as well as demonstrations and talks. There will be a legally registered demonstration at Jannowitzbrücke — a major bridge in the center of the German capital — where they are calling on climate-conscious Berliners to join them for an afternoon of live music, dancing, poetry and speeches. Elsewhere, those prepared to risk arrest will be illegally blocking busy roads.

"We have to get arrested because I think that nothing will change until we peacefully break the law," Holzberg says. "I'm OK with that."

Nick is a recent graduate. Dressed in black, he looks like your typical Berlin hipster and hasn't been involved in serious activism before. But he was excited by what the movement had started in the UK.

"The people who started Extinction Rebellion in the UK actually sat down and thought things through," Holzberg says.

The group says their numbers are swelling because they offer a stark message and admit that wrenching humanity from its course of destruction will take more than recycling, eating less meat and giving up your car. 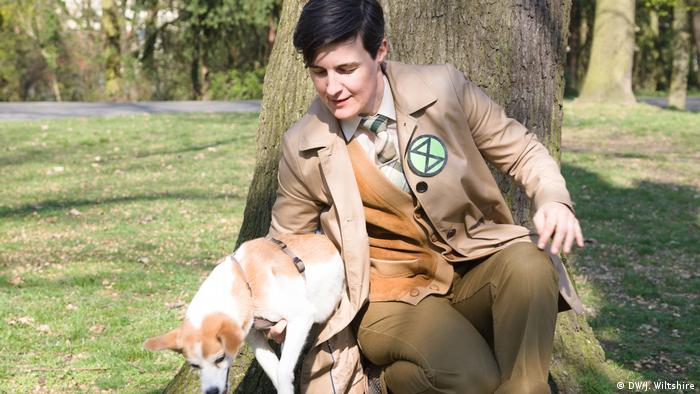 "What I can do personally is not enough," says Gailing, who wears vintage tweed with a homemade Extinction Rebellion badge pinned to the lapel. "I try to buy nothing new — which is unusual for a designer — I try to limit my impact. But we have to act collectively in order to make a big enough impact to avert disaster."

Virginie admits to being pessimistic about our planet's future. But the Rebels say we're at a crossroads. Either we resign ourselves to extinction or come together in a last stand for the future.

"I have been following climate science for some years and had tremendous emotional difficulties processing what is going on," says Hal Zabin, a 56-year-old American IT worker who and has been living in Berlin for 30 years and will be taking part in the protests this week.

"Actually doing something about the situation in a community, with a tremendously positive and inclusive culture, has given me new strength."

Water levels on the river typically drop later in fall, with knock-on effects for trade and industry. A government plan to deepen the crucial waterway in a bid to curb future disruptions is proving controversial.