The campaigners have sent the keys to unlock them inside letters to 13 government ministries. The activists are asking Chancellor Angela Merkel to declare a "climate emergency." 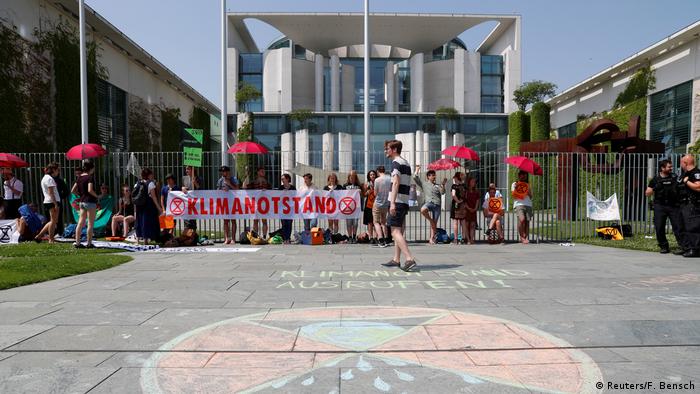 Dozens of German climate activists chained themselves to the fence outside of Angela Merkel's Chancellery in Berlin on Tuesday, demanding the chancellor declare a "climate emergency."

TheExtinction Rebellion campaigners have sent the keys to unlock themselves to 13 government ministries, along with letters detailing the climate goals they want the government to work towards, including cutting greenhouse gas emissions in half by 2025.

"What do we want? Climate Justice! When do we want it? Now!" chanted those chained to the fence and their 50 or so supporters who had also gathered outside the chancellery.

According to Extinction Rebellion organizers, similar protests are also planned for Tuesday in Leipzig, as well as UK cities like London and Edinburgh.

The campaign originates in the UK, and has been carrying out acts of civil disobedience since October 2018, including the occupation of key sites in London in April of this year.

Organizers have said that their main mission is "to achieve radical change in order to minimize the risk of human extinction and ecological collapse."