Climate research on the high, warming seas | Environment | All topics from climate change to conservation | DW | 28.06.2019

On a voyage from Antarctica to the German port of Bremerhaven, a team of scientists and students are hoping to gain a better understanding of rising temperatures in the depths of the open ocean. 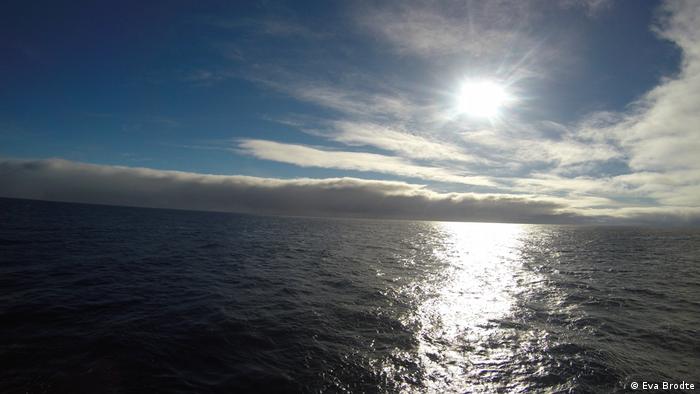 The sun burns down on the helicopter landing pad on board the Polarstern research vessel. A couple of crew members are taking a break, surrounded by an endless, sparkling ocean.

On the work deck, a deep sea measuring device — called a CTD rosette — the size of an aircraft turbine dangles from a steel cable before a crane hoists it over the railing and lowers it into the sea. Beneath the suface, it sinks to depths of up to 4,800 meters where it will collect measurements on the water's salt content and temperature.

The ship is anchored out in the middle of a watery nowhere, a couple of hundred kilometers south of Portugal and west of Morocco, where the warm Mediterranean meets the cold Atlantic.

Read more: Why the ocean is key to climate protection

"We know that in this area some of the intermediate waters have warmed over the last thirty years," says Peter Croot, a scientist with the National University of Ireland, Galway. "In some cases they warmed up by about 0.1 to 0.5 degrees [Celsius]."

He is surrounded by a group of attentive students as he talks about the measurements being collected in the deep water below the vessel.

"That may not sound like much, but given how much energy [is required] to warm the water by one degree, compared to warming the air by one degree, it takes a lot more energy," he explains.

Over the past hundred years, the oceans have warmed an average of 0.8 degrees. This voyage aims to find out whether that trend is ongoing.

Meanwhile, Anjana Aravind is watching the monitors in the research vessel, where a series of red, green and blue curves are intermittently changing.

"Now it's at three kilometers [deep] and the temperature is 2.4 degrees," says the 24-year-old physicist from Kerala, India, adding the measurments to a chart.

Half way around the world in a month

Anjana Aravind is one of 22 students from 20 countries taking part in the South North Atlantic Transition Trainsec, a kind of high seas summer school for ocean-loving young scientists. 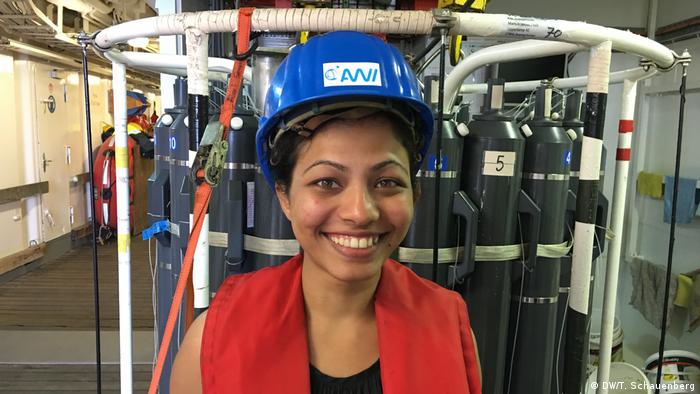 Having set out from Port Stanley on the Falkland Islands, they are spending four weeks at sea, traveling 13,000 kilometers (8,077 miles) through moderate to sub-tropical regions of the Atlantic to the German port of Bremerhaven.

High waves were a feature of much of the journey through the Arctic waters and the south Atlantic, forcing many on board to stagger on sea legs through the doctor's door in search of some medicinal relief.

But neither that, nor the pens and laptops that have a tendency to roll and slide from one side of the table to the other, has hindered the crew's research progress.

Every two days the ship stops to take long-term measurements — first in the Arctic, then three weeks later on the equator off the coast of West Africa. Most are taken by the students themselves, under the watchful eye of more experienced scientists from Ireland, Germany, New Zealand, South Africa, Argentina and Portugal.

But besides collecting data, the young team members are also there to learn about practical methods that can be used to research climatic effects on the ocean.

"[The ocean] acts as an air conditioner — everything we do is affected by the ocean," says Karen Wiltshire, who is both expedition leader and Vice Director of the Alfred-Wegener-Institut for Polar and Marine Research, which is in charge of the research trip. 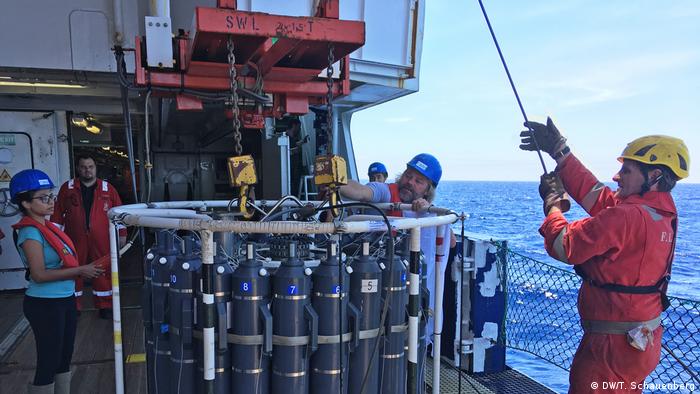 The huge measuring device can reveal secrets from the deep

Oceans absorb 90 percent of the planet's heat and help to regulate our climate. When the waters warm, they can no longer absorb as much CO2, which means more of it remains in the atmosphere. That, in turn, has  consequencs for life on land.

"The link between the land and the sea and the demise of human existence is becoming increasingly problematic," Wiltshire explains. "In order to reach the Human Development Goals, you need experts everywhere and not just in one part of the world."

Read more: Europe's seas to lose almost a third of life due to climate change: report

Encouraging the transfer of knowledge

All UN member states have agreed on the 17 Sustainable Development Goals — which set out targets for such things as poverty alleviation and environmental protection to be met by 2030.

As a result, most students on board are from developing countries, where the consequences of climate change are already visible. 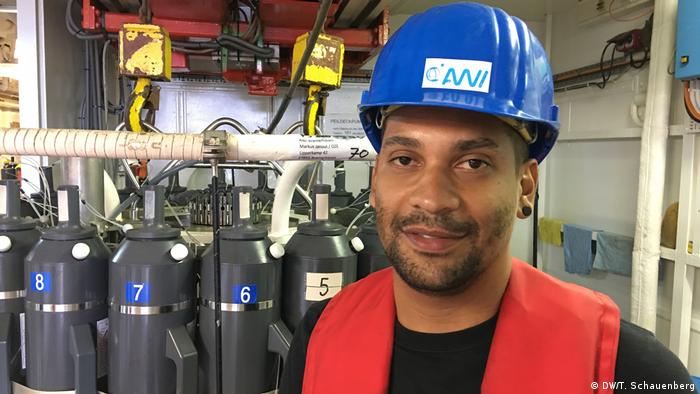 In Kerala, where Aravind comes from, heavy flooding killed more than 320 people last year. While her family was not affected by the disaster because their house is built on top of a hill, some of her friends were forced to spend days on their roofs before they could be rescued.

"The monsoon is very, very strange in recent years," she told DW. "It's coming irregularly and when it rains, it's extreme. There could always be landslides."

Yohan Didier comes from the small island of Mauritius, where around 60 to 70 percent of local coral has died over the past few years.

"Corals are extremely sensitive if the temperature of the water changes just about one or two degrees," he says. "The past year was extremely hot, so when I go diving, I see more and more bleached corals."

Didier's role model is the scientist David Vaughan, who accidentally discovered that when coral is broken into little pieces, it only takes three years for it to reproduce, instead of the typical 75 years. Vaughan wants to scatter millions of pieces of farmed coral into the sea off the coast of Florida over the next few years. Didier hopes to do the same thing in Mauritius.

After three-and-a-half hours, the crane pulls the deep-sea gauge out of the water and the ship resumes its journey at 14 knots.

It will take two more measuring stations — around six days — before the vessel docks in Bremerhaven. The on-board meteorologist predicts sunshine, calm seas and very little seasickness in the days ahead.

At dusk, the crew string red, green and blue fairy lights from the work deck to starboard. The barbeque is set up, to be enjoyed in the warm evening air, surrounded by the sparking ocean.