In a speech given from a submersible, Seychelles President Daniel Faure has called for stronger protection of the oceans. His island nation is one of many threatened by global warming. 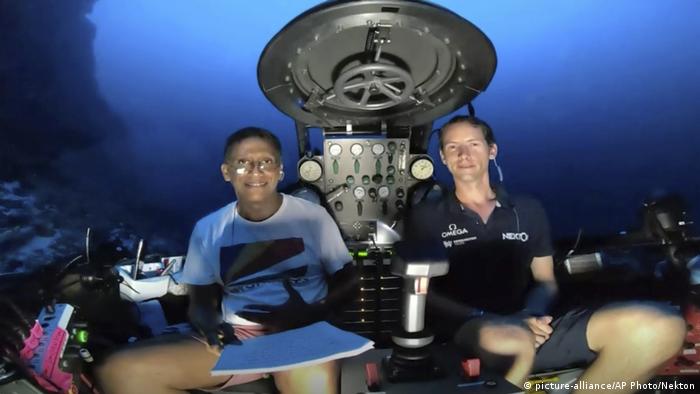 Seychelles President Daniel Faure on Sunday made a global plea to protect the world's oceans in the first-ever live speech made from an underwater submersible.

In his address, Faure called on the entire world to do more to care for the "beating blue heart of our planet."

"The issue is bigger than all of us, and we cannot wait for the next generation to solve it. We are running out of excuses to not take action, and running out of time," the president said.

The Seychelles is one of the many nations in the world already facing a grave danger from global warming, and Faure emphasized the oceans' role in regulating climate, pointing out that they produce "half of the oxygen we breathe."

Faure also spoke of the risks to marine biodiversity posed by human activities.

"From this depth, I can see the incredible wildlife that needs our protection, and the consequences of damaging this huge ecosystem that has existed for millennia," he said, adding that humankind had created these problems and could solve them.

Faure gave his speech at a depth of 121 meters (400 feet) below the surface of the sea in a submersible couched on the seabed off the outer islands of the African nation. The submersible is participating in a British-led science expedition that is exploring the Indian Ocean, with some the data it collects going to help the Seychelles in its bid to protect almost a third of its national waters by 2020.

At present, only some 5% of the world's oceans are protected, though experts say six to 10 times this amount should be given protected status if biodiversity is to be preserved.

The researchers hope that their findings will also help bring about a first UN treaty on conserving the high seas, which is scheduled to be concluded this year. The UN climate summit in Chile in December will also have oceans as one of its seven main themes.