Climate talks: The power of the world′s least powerful countries | Environment | All topics from climate change to conservation | DW | 02.05.2018

Climate talks: The power of the world's least powerful countries

Ahead of COP24, UN climate talks have started in Bonn, Germany. Stakeholders from around the world will make their voices heard. But how important are those of the world's least developed countries? 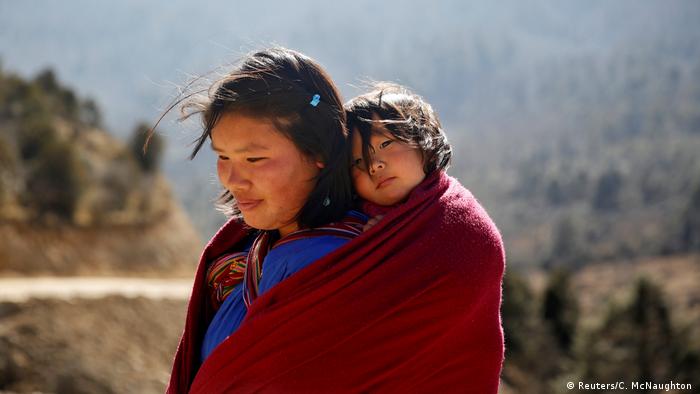 It's not hard to see who's responsible for this situation. The vast majority of greenhouse gas emissions come from industrialized nations. Poorer countries in southern Asia, Africa, the Pacific and the Caribbean have made scarcely any contribution to the planet's rising temperature. Yet they're paying for it acutely.

And they're demanding that imbalance is recognized at climate talks.

The Least Developed Countries (LDC) have moved away from a victims' narrative to proactive engagement in the negotiations, Gebru Jember Endalew, chair of the LDC group at the Bonn negotiations told DW. "We are not anymore passive listeners. We've reached a kind of leadership."

Between them, the 47 LDC nations account for less than 2 percent of world's GDP. The majority (33) of these countries are in Africa. Another 13 are in Asia and the Pacific, and one is in Latin America. Together, they represent 12 percent the world's population and just 1 percent of global trade in goods, according to UN figures. 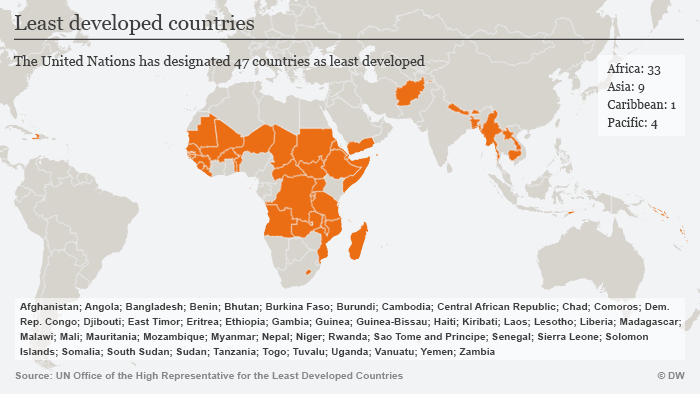 For governments in developing countries, climate protection can seem like a luxury — when the population still lacks hospitals, electricity, or enough food to feed their children.

Yet not taking action can make things even worse. For example, if agriculture doesn't adapt to more frequent floods or droughts, the economy will take a major hit.

The UNFCCC has made central the notion that richer countries — having developed on the back of fossil fuels — should support the LDCs' efforts  to adapt to a warmer world and keep their own emissions in check.

"The rich world could develop largely because it didn't control its carbon emissions," Meena Raman, a senior researcher at Third World Network, told DW. Since it is far more responsible for the environmental crisis, it should help the poor, she added.

The European Union says it is these most vulnerable countries' biggest benefactor in terms of climate finance. However, the faith-based group ACT Alliance recently claimed only 19 percent of this EU funding reaches LDCs, with most of it ending up in middle-income countries. Investing in cleaner technology in countries like Turkey and Ukraine is more attractive than boosting resilience in damaged regions.

In 2010 the EU and other developed countries committed to raising $100 billion in climate aid each year by 2020. But the funds aren't coming fast enough. In 2015 and 2016, that target fell short by nearly half, a new Oxfam report shows.

"That $100 billion is still very, very far away," Raman said. "There is no clear direction on how they are going to be mobilizing that resource."

And even $100 billion is a drop in the ocean of challenges climate change poses to the developing world, Raman adds.

Fighting to be heard

Meanwhile, lives are at stake in the LDCs and they cannot simply wait to be rescued. Yamide Dagnet, head of climate negotiations projects at the World Resource Institute, says LDCs are working hard to find solutions.

One strategy is to engage in the Talanoa Dialogue, an online platform that allows civil society to give input to the UNFCCC negotiations, and which has been a special focus of the ongoing talks in Bonn.

And now, another initiative could see the LDCs make a major breakthrough on one of the negotiations' most controversial questions.

The Suva Expert Dialogue in Bonn will open the door to financial support from rich countries to help the LDCs cope with "losses and damages" already sustained from climate change — from the physical effects of extreme weather to the broader weakening of a country's economy. Thus far, climate aid has only covered emissions reduction and adaptation to climate change.

Dagnet says loss and damages has been "a very toxic topic," provoking resistance from developed countries. Even getting on agenda is a hard-won victory for the world's most vulnerable.

Richer countries can also help poorer ones by helping them develop knowledge and resources. For example, countries like Germany that have developed renewable energy technology can not only make it affordable for poorer countries, but also train local people in the sector, Raman said.

But the transfer of expertise doesn't always have to be from the global North to the South.

The Least Developed Countries Universities Consortium on Climate Change (LUCCC) , launched at COP21, allows those hit hardest and with least resources to work together, support one another and learn from each other's experiences.

"It is really inspiring to see LDCs organizing themselves instead of waiting for the North. They can learn a lot from each other," Dagnet said.

But there is only so much the world's poorest can do. Until those responsible for most of the world's emissions change their ways, the problem will only get bigger and solutions further out of reach.

Endalew says the LDCs will keep striving for greater visibility, contributing to the Talanoa Dialogue and working hard to achieve the goals agreed in Paris. But their efforts will amount to nothing if the rich countries don't act.

"My request for developed countries is to stabilize the climate — otherwise, the cost of adaptation will be even higher for us," Endalew pointed out. "Do your homework, be ambitious and reduce your emissions."

Developing countries like Bangladesh bear the brunt of climate change. DW talks to climate expert Saleemul Huq about what the global community must do to help them adapt — and why he's optimistic about this year's COP. (14.11.2017)

The Dutch are attempting to "climate-proof" their port city of Rotterdam by changing its relationship with water. Other delta cities around the world will also need to innovate if they are to survive sea level rise. (09.05.2017)