Talanoa dialogue: Giving everyone a voice in the climate conversation | Environment| All topics from climate change to conservation | DW | 09.02.2018

Talanoa dialogue: Giving everyone a voice in the climate conversation

Ahead of the COP24 climate conference set for Poland in November, the United Nations has started the Talanoa Dialogue — it's one of the key outcomes of the previous climate summit, COP23. But what is it actually about? 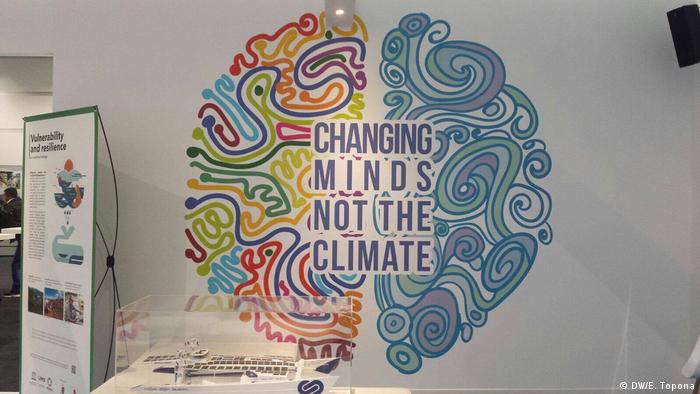 The Paris Agreement set clear goals to reduce emissions and keep our global temperature under 2 degrees Celsius (3.6 degrees Fahrenheit), and as close as possible to 1.5 degrees Celsius.

The climate conference COP23 (23rd conference of parties) represented a major step to materialize such aims and COP24, to take place in December in Katowice, Poland, is expected to be a new strong push to move forward the global climate agenda.

On Thursday, Ambassador Nazhat Shameem Khan, Fiji's permanent representative to the United Nations in Geneva and Chief Negotiator for COP23, expressed the importance of one of the main outcomes of COP23 and a key element for the upcoming COP24, the Talanoa Dialogue.

Launched at the COP23 and previously known as the facilitative dialogue, it aims at collectivelly assess the progress made on climate action and increase action to reach the Paris Agreement goals. The dialogue should also help to inform on the next step of National Determined Contributions (NDCs).

In order for stakeholders to be able to share their inputs, the climate framework UNFCCC has launched an online platform where participants can submit their proposals addressing three main questions: Where are we, where do we want to go, and how do we get there.

"A central component of the Talanoa Dialogue is to set the stage for this conversation about how to strengthen climate action and seize the substantial economic and social development benefits those actions can bring," said Paula Caballero, global director of the climate program with World Resources Institute.

Talanoa is a traditional word in Fijian — Fiji being the island nation presiding over the last COP in Bonn — to refer to telling a story, or having a conversation. It's a inclusive, participatory and transparent process. The idea behind the word is to share knowledge and experiences that could lead to a better understanding and thus to beneficial decisions for all.

As opposed to confrontation, the Talanoa Dialogue is designed in an effort to bridge the parties to the Paris Agreement — and integrate each of them in the decision-making process.

"After we began our consultations, it became very quickly apparent that what the parties wanted was a constructive dialogue," Khan said.

But not only governmenat stakeholders will have a word. Also non-party stakeholders will participate in the process — including local governments, civil society, nonprofit organizations, businesses, investors, the scientific community, think tanks and individuals.

The journey is about respectful relationships and respectful dialogue, he said. It's about reaching a position where we all make a decision for the collective good, Khan added.

During the preparatory phase, which will run until November, everyone is welcome to submit their proposals responding to one of the three central questions.

Those questions are: Where are we, where do we want to go, and how do we get there?

"I very much welcome the portal because it provides transparency and broadens participation in the dialogue," Patricia Espinosa, Executive Secretary of the UNFCCC, said.

"I look forward to many governments and other actors making their submissions via the portal as part of worldwide efforts required for the next level of climate action and ambition," she added.

Around May, a session in Bonn, Germany, will offer non-party stakeholders the opportunity to meet representatives and share their contributing inputs in the fight against climate change.

The Intergovernmental Panel on Climate Change is expected to publish a special report by October, analyzing the impacts of a temperature rise of 1.5 degrees Celsius above pre-industrial levels, and proposing potential ways to limit it.

"This report provides a very strong basis for a scientific discussion, not only on where we are now, but how on where we want to be and how we want to get there," Khan pointed out.

The political phase will take place at COP24 and will bring together high-level representatives. Political discussions will focus around assessing the collective efforts to meet the Paris Agreement goals and informing the preparation of the NDCs.

But before COP24, people can think seriously about how to contribute to the dialogue. What do they expect from politicians at COP24, and what kind of results would they welcome? They can select their stories and ideas to be submitted through the online portal. Over social meda, they can use the hashtags #TalanoaDialogue and #Talanoa4Ambition.

"This is the most important moment for everyone, because they can influence the sort of conclusions that are going to be made at COP24," Khan concluded.

With the Paris Agreement now almost a year old and ratified by half of its signatories, the next big word is implementation. But just how do countries make good on their climate pledges? One option is to start talking. (02.11.2016)