Nowhere in the EU is smog more suffocating than in southern Poland. This year, the polluted Polish mining city Katowice will host the COP24 climate conference. Ahead of that, change is in the air — and on the ground. 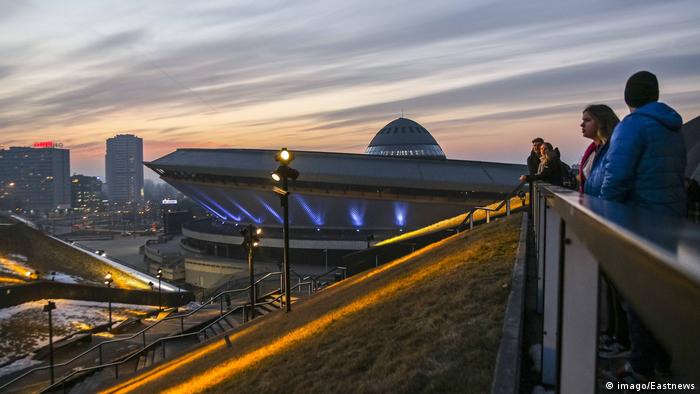 Talk to anybody in Poland about Katowice and you'll hear the words mining, coal and steel.

The city of around 300,000 in the southeast of the country sits in the heart of the Polish rust belt. It hosts the mining industry's largest trade fair and is home to Europe's largest coal producer.

On top of this, almost half of the 82,000 jobs in Poland that rely on coal production are found in Katowice's wider metropolitan region of Upper Silesia.

Little wonder then that coal is seen as the backbone of the Polish economy — even though mining has long since become a financial graveyard for taxpayers.

A climate conference in the heart of the coal lobby? 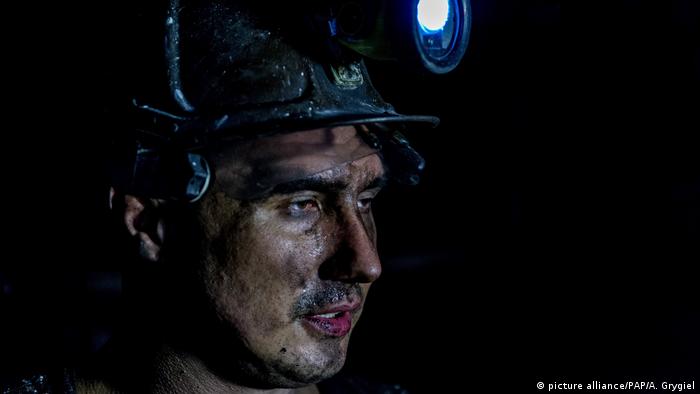 'Poland is coal-land': Politicians, trade unions and coal companies have so far joined forces in Poland to support the industry

In Poland, coal is "not just something that you burn," said Andrzej Ancygier from the think tank Climate Analytics.

"Coal is to a large extent part of the Polish identity."

That is especially true in Katowice. Eyebrows were raised after the COP23 world climate conference held November 2017 in Bonn, Germany, when the Polish coal capital was chosen to host the next climate summit (COP24) in 2018.

Critics questioned if an end to fossil fuel energy could genuinely be negotiated in a region that has inspired coal production like no other in the country.

Many environmentalists doubt that a climate conference held in the midst of the powerful Polish coal lobby can succeed.

But Katowice is worth a second look. The city is changing at a rapid pace. It is becoming greener and more sustainable — in some surprising ways.

When researchers get active 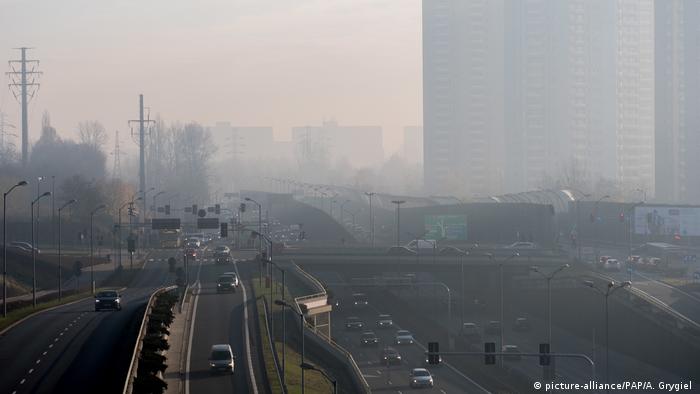 Notorious and noxious: smog in Katowice regularly blankets the metropolis between November and April

Marcin Glodniok and his colleagues from Katowice's Central Mining Institute are part of the shift. They are tackling one serious side effect of the coal economy: smog.

Between November and April, a heavy veil of hazy smog often hangs over the city. It is, quite literally, a homemade problem. More than 80 percent of private households are heated with outdated coal ovens, sending dangerous particulate matter and soot into the air unfiltered.

The burning of low-quality coal and even household waste is common, further exacerbating air pollution. The result for residents, according to activists from Katowice Smog Alarm, is that every citizen breathes the equivalent of 1,711 cigarettes a year — involuntarily.

Environmental engineer Glodniok and his team have developed a sniffer drone to help combat this. 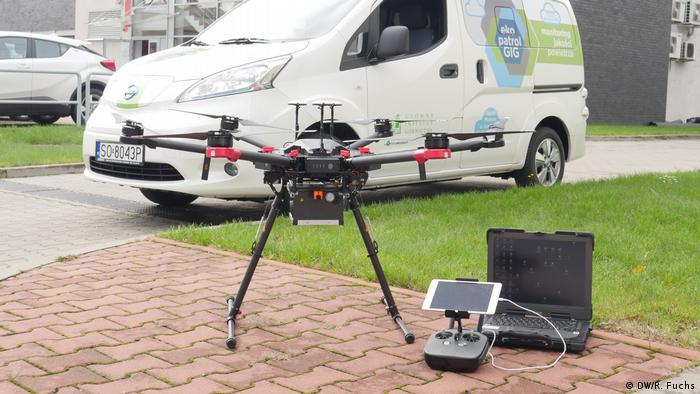 A sniffer-drone from the local university carries pollution sensors

Armed with sensors and cameras, it floats about the city's roofs and chimneys and maps air quality. The flying patrol's mission is to expose the worst pollutors.

The goal is to "build awareness about the types of fuel that should be burned in their households, and how to prevent smog," explains Glodniok.

When citizens get active

Change isn't only happening in the air: others have decided to plant it in the ground.

One environmentalist, a street artist who goes by the name Guerilla Partisan Witold, wanders through the metropolitan region almost every day, planting trees, bushes and flowers — wherever and whenever he wants.

The guerrilla gardener is particularly fond of orphaned green areas or bald-swept sidewalks. He calls himself a "garden partisan."

In the middle of the market square in Chorzow, a suburb of Katowice, he picks up his shovel, digs out a hole, and places a small spruce tree in the ground. 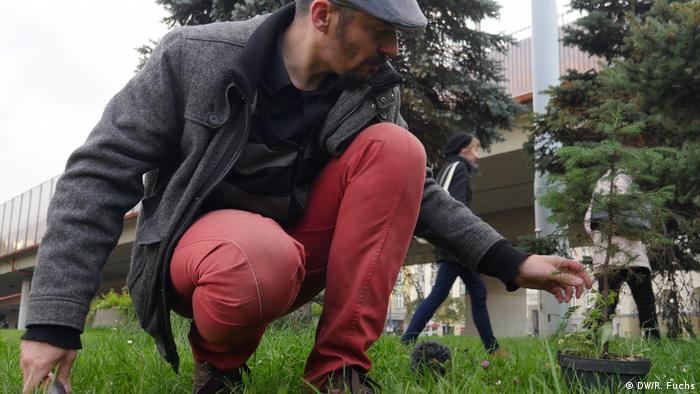 Guerilla gardeners in Katowice plant wildlife in the concrete-covered city

"I have no document to say that this ground is mine ... so it is illegal," says Witold during the digging. "But I see how plants grow up, I think it is good."

"Not everything that is illegal is bad," he adds.

The artist — lanky, in his mid-forties, sporting a goatee and beret — digs because he doesn't want to wait for domestic or global politics. He knows more than a dozen citizens who are also active in the underground green movement. He believes there are more, and points out that a neighbor has followed suit.

Witold believes they are all working together for the greater good. "I do it for myself, because every day I cross this area three or four times, and I don't like how it looks."

"I have a real impact to an area where I live."

When campaigners get active 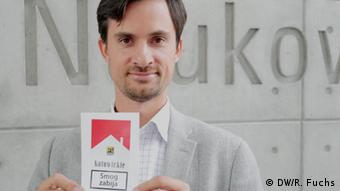 Patryk Bialas is convinced that an energy transition in Katowice can be triggered by telling stories. He works at the Euro-Centrum technology park advising local companies on how to invest in energy-efficient and renewable technologies when constructing new buildings. He has become one of the faces of the energy revolution in Katowice.

Jobs are a central theme of his post-coal credo. The green electricity specialist believes the renewable energy sector in Poland could provide employment for 186,000 people in 2030.

"If we compare that with the 82,000 jobs in the mining industry, it means there's a concrete alternative for the already well-prepared miners."

Such stories are being told in many Western European countries. But in Poland, skepticism over renewable energy continues to dominate. Critics say they are too expensive, or unreliable. Energy from wind, sun or biomass is often talked down — in part because it is praised so much in neighboring Germany.

As the mood in Poland has more more hostile to the European Union, the national conservative ruling party Law and Justice (PiS) has encouraged a nationwide mood against a fossil fuel phase-out.

In spite of this, Bialas thinks the front against renewables is crumbling.

Interest in green technology has risen sharply. At the last regional economic forum, the number of exhibitors in the field of renewable energy cleanly doubled in a single year.

Meetings for adapting to climate change are being held in Katowice's town hall, and there is a subsidy program for replacing old coal-fired heaters with newer systems — preferably powered by renewable energy.

According to Bialas, all this represents the first steps toward an energy turnaround.

"Hopefully, the change will go much quicker than in Germany — but we do need a little more time."

The mayor of Katowice, Marcin Krupa, is grateful for these changes — even if he may not officially express sympathy for the guerrilla gardeners.

Krupa is convinced that the former coal-mining area can become a city for congresses and cultural events, comparing development in Katowice to that of Germany's industrial Ruhr region. 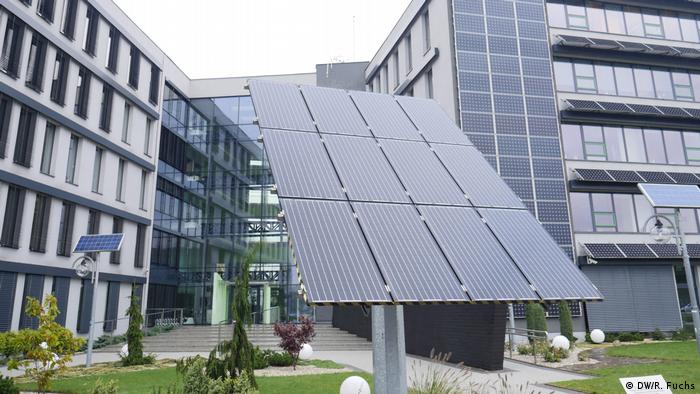 Inside a special cultural zone sits the International Congress Center, where the COP24 summit will take place. "This venue has been created to change the image of Katowice," Krupa said.

Katowice is a model city for a simpler reason, Rosicki thinks.

"The carbon economy in this region is the reality — and will be over the next couple of years. So it's a good place to discuss what to do with coal-based regions."

Research for this story was supported by a grant from the Heinrich Böll Foundation.

From gray to green: Urban farming around the world

Moscow authorities have pledged to "renovate" this city of 12 million, and give it a "European" look. But biologists warn that Moscow's natural habitats are disappearing at an alarming speed, with biodiversity at stake. (25.07.2017)