Ahead of a meeting with Japanese Prime Minister Shinzo Abe, President Donald Trump has dismissed recent missile tests in nearby North Korea. He later joined Abe for a round of golf outside Tokyo. 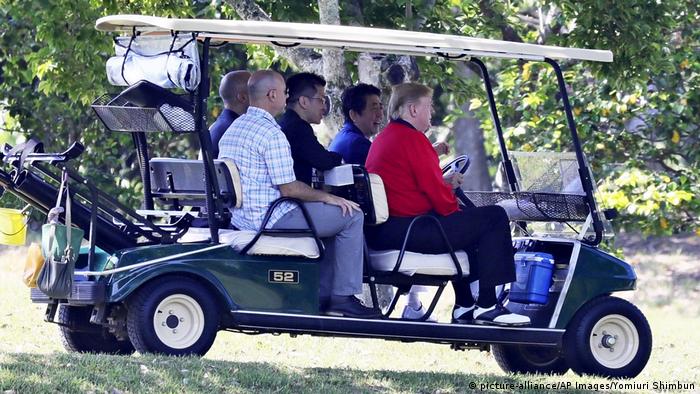 "North Korea fired off some small weapons, which disturbed some of my people, and others, but not me," Trump said in an early morning tweet on Sunday, before joining Japanese Prime Minister Shinzo Abe for a game of golf outside Tokyo.

The president, who is on a four-day trip to Japan, made the comments after National Security Adviser John Bolton told reporters on Saturday that short-range missile tests by North Korea on May 4 and 9 constituted a violation of UN Security Council resolutions.

Trump said he had confidence that North Korean leader Kim Jong Un "will keep his promise to me," a reference to a North Korean pause in missile launches and nuclear tests since 2017.

Some administration officials, including Secretary of State Mike Pompeo, have sought to downplay this month's short-range missile launches, which came following the collapse of talks between Trump and Kim in Hanoi in February.

"The moratorium was focused, very focused, on intercontinental missile systems, the ones that threaten the United States," Pompeo said in a recent television interview.

Japan views the short-range missile tests as a threat due to the country's proximity to North Korea.

In the same tweet, Trump also said he had "smiled" when North Korea called former Vice President Joe Biden a "fool of low IQ" and an "imbecile bereft of elementary quality as a human being" after the Democratic presidential hopeful criticized Trump's meetings with Kim during a speech.

Trump said he "smiled when he called Swampman Joe Bidan a low IQ individual, & worse," before later offering a version of the tweet with the correct spelling of "Biden."

Following golf, Trump and Abe will attend a sumo wrestling match. On Monday, official talks are expected to focus on trade and North Korea.

Trump calls for more Japanese investment in US

At the start of a four-day visit, US President Trump has called on Japanese business leaders to boost investment in the US. Trump is hoping to secure a trade deal to curb what he described as Japan's "substantial edge." (25.05.2019)

North Korea fired two short-range missiles on in its second test in under a week. The United States said it seized a North Korean cargo ship as tensions again mounted between the two countries. (09.05.2019)