The neo-Nazi NSU murdered 10 people across Germany between 2000 and 2007. According to a survey, memorials to honor those victims have been repeatedly targeted by vandals. 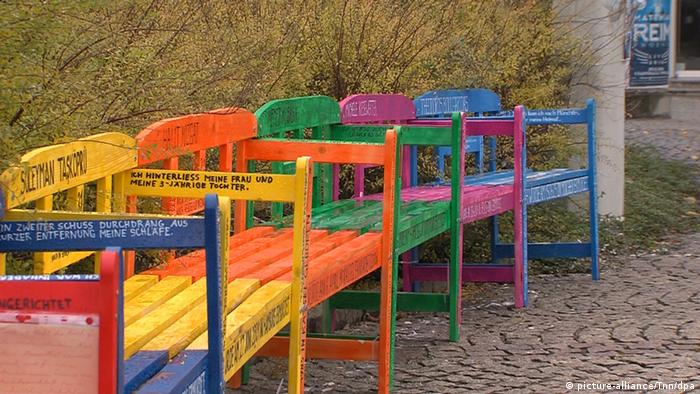 Multiple memorial sites for victims of the National Socialist Underground (NSU) have been desecrated — some more than once, Germany's Welt am Sonntag newspaper reported on Sunday.

The right-wing NSU terror cell killed nine people with immigrant backgrounds and a policewoman between 2000 and 2007. The group's three members evaded police for years, hiding out in the eastern German town of Zwickau.

Welt am Sonntag carried out a survey of the eight cities where memorial sites to the group's victims are located and found that most of the sites had been targeted by vandals.

Earlier this month, an oak tree honoring the NSU's first victim, a flower seller called Enver Simsek, was cut down in Zwickau. Police in the town said perpetrators had also destroyed a wooden bench with an inscription commemorating the victims. Another memorial was desecrated in Zwickau in 2016.

In 2014, a commemorative plaque in Kassel was coated in bitumen, while in Nuremberg in 2017, another plaque was defaced with a swastika. One memorial in Rostock has been vandalized three times in the past five years, the newspaper found. Some monuments had simply been stolen. One was thrown into a river.

"The desecration of the NSU memorials is a slap in the face of the bereaved and cannot be tolerated by society," Interior Minister Horst Seehofer told Welt am Sonntag.

He added that firm action needed to be taken against all forms of right-wing extremism and xenophobia.

Authorities in Germany have warned of an increased risk of right-wing attacks. The country is reeling from an anti-Semitic assault on a synagogue in the eastern city of Halle on Wednesday that left two people dead. Investigators are treating the shooting as a far-right terrorist attack.

"The terrible crime in Halle has shown that we must act now. Words of regret aren't enough to counter the threat to the safety of our citizens," Seehofer said.