Irmela Mensah-Schramm has been found guilty of property damage for painting over neo-Nazi slogans. Many Germans were outraged that she was fined on the same day as a deadly anti-Semitic attack in the city of Halle. 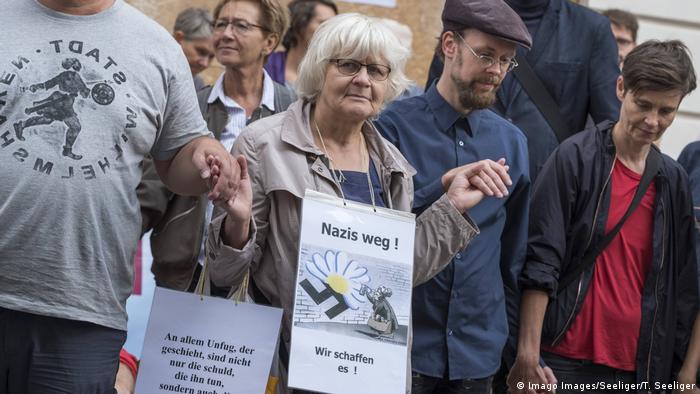 Irmela Mensah-Schramm has been well known in eastern Germany for decades for her specific fight against far-right hatred. The 73-year-old Berliner covers up fascist or neo-Nazi symbols and tags in public places with graffiti of her own, often sketching hearts, or simply painting over racist, offensive language. She also scrapes off stickers with xenophobic slogans.

But on Thursday, Mensah-Schramm was fined by a court in the state of Thuringia for property damage. While this isn't her first legal battle, this is the first time a judge has ruled against her.

According to public broadcaster MDR, Mensah-Schramm was charged over some spray painting she did in the city of Eisenach. Last December, she found a graffiti tag in the city of Eisenach that read "NS-Zone", referring to National Socialism, which is how Germans often refer to the Nazis and the time they were in power. She covered up "NS" with a heart, and undertook three other similar paint jobs in the city.

Someone photographed them and reported it to the police. Mensah-Schramm told MDR she was given a €300 ($330) fine and ordered to pay court costs. She had earlier refused an offer by the judge to avoid a trial if she donated €500 to non-profit groups, saying it would mean legally admitting she did something wrong.

Germans expressed their outrage on social media, as the verdict came on the same day as a deadly anti-Semitic attack against a synagogue in the city of Halle, also in the east.

For her part, Mensah-Schramm shows no sign of stopping. She said that if what she did was criminal, "I'd like to see myself as a repeat offender."

Deadly attack targets synagogue in Germany — as it happened

A shooting outside a synagogue in the eastern German city of Halle left two people dead and two injured. Interior Minister Seehofer confirmed an anti-Semitic motive. (09.10.2019)