Scrubbing away hate: One Berliner′s cleaning campaign against far-right graffiti | Germany| News and in-depth reporting from Berlin and beyond | DW | 01.06.2017

Scrubbing away hate: One Berliner's cleaning campaign against far-right graffiti

Irmela Mensah-Schramm removes Nazi symbols and other far-right graffiti from public spaces in German cities. But the 70-year-old Berlin resident is in trouble after a court charged her with damaging public property.

Irmela Mensah-Schramm (pictured above) calls herself a "Polit-Putze," a combination of German words that roughly means "political cleaner." The former teacher has found her calling in scrubbing and removing far-right symbols and slogans such as the Nazi swastika and expressions of hostility toward foreigners from walls, park benches and other objects in public places.

Mensah-Schramm began her initiative in 1986, after she found a Nazi sticker on a wall across from where she lives in Berlin's western part. The sticker's slogan demanded the release of Rudolf Hess, a former Nazi politician and Hitler's deputy in the Third Reich, who served time in Berlin's Spandau prison until his death in 1987.

"I did not remove the sticker immediately, because I was completely taken by surprise. I was shocked," the activist told DW. "But after about 10 hours, I went to remove it. It was a crucial experience for me. When I scraped the sticker off, I had this great feeling and I thought, ' I've done it, and now it's gone.' If you don't do anything, you can't achieve anything."

Since then, the 70-year-old has been busy scraping, scrubbing and spray-painting over the Nazi symbols and slogans that she sees popping up every now and then. Mensah-Schramm's zeal has also taken her to several different countries in Europe, including Finland, Poland, Luxembourg, Belgium, France and Austria.

Far-right symbols depicting Adolf Hitler and the Nazi regime or claiming the supremacy of the German race are punishable by law in Germany. However, authorities are often slow in removing these signs from public areas, and this has been a major motivation for Mensah-Schramm to continue with her work.

"These Nazi symbols, which should have been removed long ago, remain on the walls for years," she says. Scrubbing away the signs with anti-graffiti cleaners does not help much. "You can still see the outlines, because the rest of the wall is much darker than what you've just removed," she explains.

That's why Mensah-Schramm decided to use spray paint to disguise the graffiti. "I was with students in Sangerhausen, in Saxony Anhalt. I tried removing a swastika from the wall, but it was still showing, so I just sprayed some green paint on top. And then a student said, 'Why don't you make a heart?' So I made a green heart. The students were so excited! They took their paints and covered each unsightly symbol with green hearts," she said. 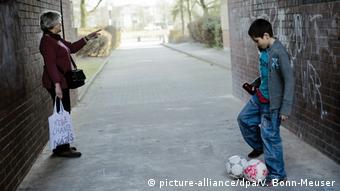 Does removing hate have a limit?

Mensah-Schramm is happy that people in Sangerhausen now see green hearts on a wall that was once covered with far-right slogans. But some of her recent attempts at removing hateful comments have not gone down well with the authorities.

In May, the activist repainted over a graffiti slogan that said, "Merkel muss weg," German for "Merkel must go."

"That is PEGIDA's hate slogan against Merkel [the German chancellor]," Mensah-Schramm said, referring to the organization "Patriotic Europeans against Islamization of the West" (PEGIDA), a group that holds rallies to protest at what it perceives as a threat from the growing number of Muslims in Europe.

The former teacher converted the slogan on a wall in Berlin's Zehlendorf area to "Merke: Hass weg," which means, "Look, the hate is gone." She also painted two hearts next to it.

Despite her positive intentions, Berlin officials charged the 70-year-old with damaging public property. At the trial in the German capital earlier this week, a judge warned Mensah-Schramm that she would be fined 1,800 euros ($2,016) if she repeated the offense. A court spokesperson said that judges and the prosecutor could have let her go had she removed a Nazi swastika. But the slogan "Merkel must go" was not unconstitutional, she said, and that is why the activist was let off with a warning.

The hearts will keep coming

For Mensah-Schramm, who has won Germany's highest honor - the Federal Cross of Merit - for her slogan-removing campaign, the trial showed how much support she had from the country's public.

"The response to the trial has been immense. People I don't know have written to me and offered monetary support if I have to pay the 1,800-euro fine. The support has surprised me and I have clearly been validated. In that sense, the trial was very important for me with regard to knowing how the public is reacting to my initiative," she told DW.

The state prosecutor has meanwhile asked the retired teacher to "choose another way of expressing her opinion."

But the Berlin resident is adamant. She plans to appeal the judgement - and, naturally, to continue erasing far-right symbols.

A German innkeeper could face prosecution over six bottles of wine that had labels showing Adolf Hitler, officials have said. The man reportedly said someone gave him the "Führer wine" as a present. (05.09.2016)

Still full of Nazi symbols, Vogelsang Castle is reopening with a new exhibition that reveals how Nazi ideology convinced so many people. With the right-wing growing in Germany, it serves as a warning. (08.09.2016)

Pupils from the German School near Buenos Aires have stirred up controversy after they went to a costume ball at a disco in Bariloche. The boys sported Nazi symbols like the Hitler mustache and the swastika. (26.08.2016)