A new poll has found waning support for the AfD in the aftermath of a deadly far-right shooting in the city of Halle. The AfD has been criticized across the political spectrum for its incendiary rhetoric. 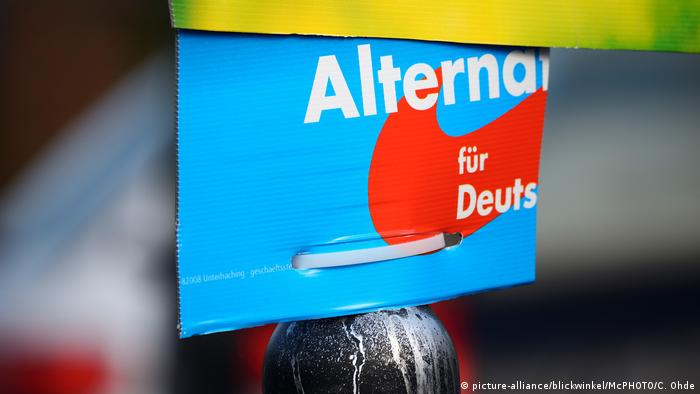 The deadly anti-Semitic attack in the eastern city of Halle has already dented approval ratings for the far-right Alternative for Germany (AfD) party, according to polling done for German broadcasters RTL and n-tv published on Saturday.

Support for the nationalist party dropped two points in two days, from 13 percent on Wednesday morning, before news of the assault on a Halle synagogue broke, to 11 percent by Friday.

Perhaps even more striking than the loss in support, the poll found that an overwhelming 90 percent of Germans who do not vote AfD agreed with the sentence "as a result of their positions and choice of words, the AfD paves the way for right-wing extremist acts of violence."

Furthermore, 76 percent of Germans who do not support the AfD said they are worried that far-right ideologies and xenophobia are becoming dangerously acceptable.

The AfD, which is openly anti-immigration and Islamophobic, and has had high-profile members linked to anti-Semitic statements and incidents, was the target of hefty critique both before and after the attack that left two people dead  and two injured when a right-wing extremist opened fire.

'The political arm of right-wing terror'

Shortly before the violence in Halle, Interior Minister Horst Seehofer accused the AfD of inciting hatred, accusing them of attempting to commit "spiritual arson" in the public discourse.

In the aftermath of the attack, lawmakers of every ilk have come out to lay some of the blame at the feet of the AfD, saying that their rhetoric has made extreme far-right views more socially acceptable in Germany, thus leading more people to become radicalized.

Michael Roth, who is currently vying for the leadership of the Social Democrats (SPD), told German newspaper Die Welt on Saturday that "the political arm of right-wing terror sits in the Bundestag, and it is called the AfD."

The AfD, for its part, has accused the other parties of instrumentalizing the Halle attack to make political gains against them.

In a press statement, party leader Alice Weidel said that the AfD "condemns the attack and stands on the side of Jewish fellow citizens."

"We reject the instrumentalization attempts of ...politicians who want to accuse the AfD of 'complicity' in the act of terrorism of Halle. Anyone who abuses this horrific crime to slander political competition with baseless defamation is dividing society and weakening the democratic foundation on which we stand. "