How Hong Kong protests are inspiring movements worldwide | Asia | An in-depth look at news from across the continent | DW | 22.10.2019

From blocking airports to using encrypted messaging apps, the tactics used by anti-government demonstrators in Hong Kong have been increasingly adopted by protesters in places like Indonesia and Catalonia. 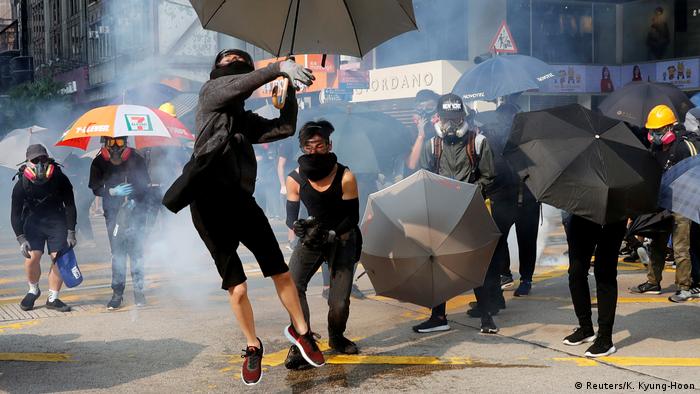 Over the past four months, mass anti-government protests in Hong Kong have captured the world's attention. Equipped with modern communication technologies, the demonstrators have focused their anger toward the Hong Kong government, police and symbols of Beijing's rule.

The largely leaderless protests mean they're a departure from the traditional hierarchy of a political movement. Hong Kong protesters instead plan every rally through a decentralized organizational structure.

To facilitate smooth information sharing, Hong Kongers have been relying on messaging apps like Telegram and a live map that helps protesters instantly notice the location of the police. From street blockades to air traffic disruptions, Hong Kongers' tactics have become "textbook examples" for protesters in other countries.

In Indonesia, the demonstrations were among the biggest student rallies since mass protests toppled the Suharto dictatorship in 1998. The trigger for the protests was anger over a law that the students say weakens the war on graft and other controversial new bills, including a criminal code that outlaws sex outside marriage.

The protests often turned violent, with demonstrators gathering in front of government buildings, burning tires and throwing stones as well as petrol bombs at security forces. Police responded by firing tear gas and water cannons at the protesters.

According to two students who participated in the protests, information about the rallies was disseminated through social media and messaging apps.

To help protesters acquire some basic knowledge about how to deal with tear gas, some students translated videos and articles about Hong Kong protesters' tactics to extinguish tear gas into Bahasa Indonesia.

"We share information about how to deal with tear gas through WhatsApp groups, Line groups, Twitter and Instagram," said a 23-year-old computer science student who didn't want to be named. "I also organize discussion groups to talk about Hong Kong protesters' other tactics and the background to their protest."

A female college student told DW that many protesters in Indonesia covered their faces during the protests, a tactic that has been universally adopted by Hong Kong demonstrators. "It is important for us to remain flexible," she said. "The perseverance that Hong Kongers have displayed over the past few months is truly inspiring." 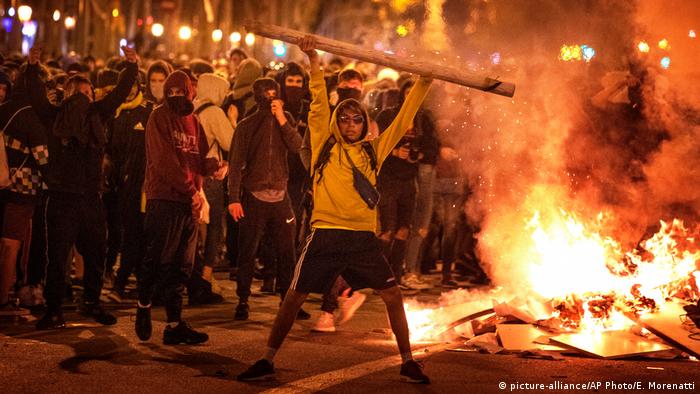 In Catalonia, meanwhile, separatists protesting against the jailing of nine of their leaders are openly copying tactics devised in Hong Kong.

Shortly after Spain's Supreme Court recently sentenced nine Catalan leaders to prison terms of up to 13 years over their role in a failed 2017 independence bid, 240,000 users of Russian-designed messaging app Telegram received a message urging them to head to Barcelona's El Prat airport, Spain's second busiest.

The goal according to the message — sent by a new online separatist platform "Tsunami Democratic" — was to "paralyze" the airport, just as demonstrators did in Hong Kong in September.

Tsunami Democratic uses messaging services like Telegram and has developed its own application to issue orders by an anonymous leader for its followers to carry out acts of what it calls non-violent civil disobedience.

The massive protests in the region have often spiraled into violent clashes with police. Protesters burned hundreds of trash bins and used gasoline bombs, acid, chunks of pavement and other weapons to assault police.

To disrupt air traffic, Catalonian protesters entered the airport with the help of 130 boarding passes shared by Tsunami Democratic via an app. A similar tactic was used by Hong Kong protesters, who bought tickets for cheap flights to enter the airport and organize a mass demonstration there.

Many Catalan protesters cite the demonstrations in Hong Kong as a source of inspiration. "We have been very interested in the Hong Kong protests since the beginning," said a member of Picnic x República, an online platform created to mobilize Catalans for political causes. "The way Hong Kong protesters react to repression; the mindset of being quick, unexpected and creative, appeals to us."

Picnic x República argued that technology plays a key role in Catalonia's mobilization and engagement of protesters, as it keeps them informed. "The use of technology allows anyone to send photos and videos about the rallies and whereabouts of police officers, which lets us share information as soon as we can," Picnic x República told DW.

While Catalan protesters have learned a lot from their peers in Hong Kong, some observers point to fundamental differences between the two protest movements.

People in Hong Kong and Catalonia have different demands, Shiany Perez-Cheng, a lecturer and political analyst at the University of Salamanca, told DW.

She pointed out that Hong Kong protesters' five demands don't include seeking independence for the Chinese special administrative region, while Catalan protesters are hoping to achieve the region's secession from Spain.

"Hong Kong protesters are asking Beijing to respect the commitments made in the Sino-British Joint Declaration and Hong Kong's Basic Law, whereas Catalan protesters are violating the Spanish constitution and the Statute of Autonomy of Catalonia by seeking to achieve secession," said Perez-Cheng.

An anti-government protest in Hong Kong has turned violent, with police and protesters firing tear gas and petrol bombs. The march took place despite recent attacks on protesters. (20.10.2019)