Spain rejects talks with Catalan separatists after days of unrest

Madrid is taking a tough stance against protests triggered by the jailing of Catalan separatist leaders. Police expect the often violent protests to continue. 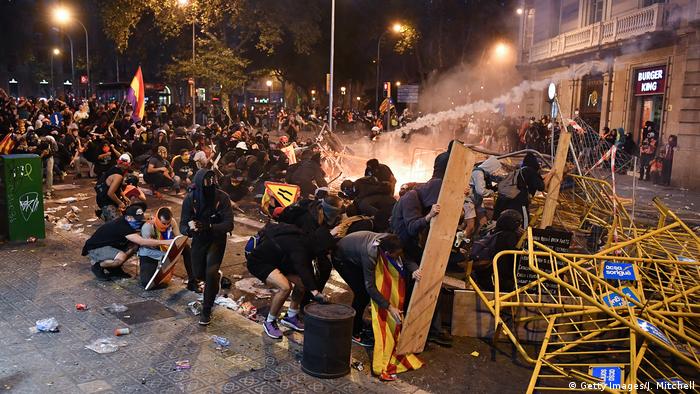 The Spanish government dismissed calls on Saturday from Catalonia's regional president to negotiate after days of often violent protests following the jailing of pro-independence leaders.

Thousands of mostly peaceful protesters took to the streets of Barcelona for a sixth day on Saturday, a day after radical separatists rampaged through Spain's second-largest city and clashed with police.

Catalonia's president, Quim Torra, said the unrest did not reflect the peaceful nature of the independence movement and requested talks with Madrid.

"We urge the acting prime minister of the Spanish government to sit at a negotiating table to talk," he told reporters.

"Mr. Torra must strongly condemn the violence, which he has not done so far," Sanchez said in a statement.

"The government of Spain reiterates that the problem of Catalonia is not independence, which will not occur because it is not legal and nor does the majority of Catalans want it, but rather coexistence," he said.

He added that Madrid has "always been open to dialogue in the framework of respect for the law," in an apparent reference to Catalan separatists' demands for another referendum viewed by the government as a nonstarter.

Torra has called on protesters to remain calm and be peaceful.  He responded to the prime minister by saying that the government had "no proposal for Catalonia."

More than 500,000 people gathered in downtown Barcelona on Friday in a show of force after the Supreme Court handed down stiff prison sentences to nine separatist leaders who led a failed independence bid in 2017.

The peaceful protest turned violent when some masked youths blocked streets and lit fires as they hurled rocks and fireworks at police, who responded with tear gas and rubber bullets.

"The images of organized violence during the night in Barcelona have overshadowed the half a million people who demonstrated in a peaceful and civic manner to show they rejected the verdict," said Catalan interior chief Miquel Buch, who oversees the regional police.

Read more: Catalan protesters: We want to make a point

Emergency services said 152 people had been injured in Friday's clashes in Barcelona, as well as dozens more across Catalonia.

Nearly 200 arrests have been made, including 83 people during overnight violence, the Interior Ministry said.

Independence is a highly divisive issue, with a poll in July showing support for secession at 48.3% of people against and 44% in favor.

Highlighting that division, Barcelona Mayor Ada Colau, who does not support the secessionist movement, said she was worried about the violence over the past week.

"Barcelona does not deserve what we are living through," she said.

The ongoing dispute over Catalonia is likely to take center stage as Spain heads towards a fourth election in as many years on November 10.

Huge crowds are converging on Barcelona as part of a mass demonstration in support of Catalan independence. Unions also called a strike in the region to protest against the jailing of nine separatist leaders. (18.10.2019)