Spaniards are set to head to the polls for the fourth time in four years. Although there is still time to form a coalition government, Prime Minister Sanchez has said there will be a "repeat election on November 10." 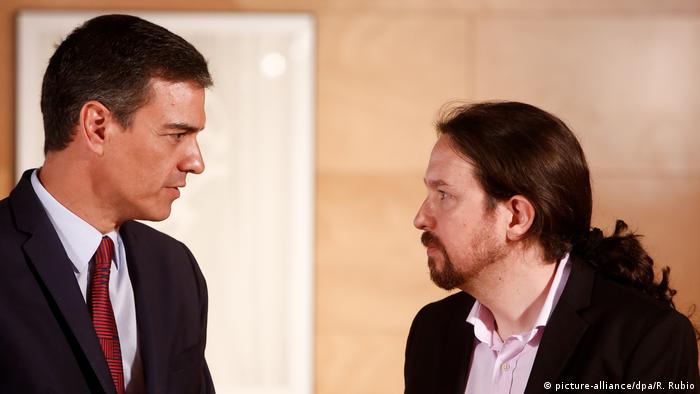 Spain is set to have a general election on November 10 as the deadlock between rival parties could not be broken on Tuesday, according to Premier Pedro Sanchez.

It will be the fourth time in as many years that the Spanish will go to the polls after Sanchez's Socialist Party won the most seats in April's election, but ultimately was unable to form a majority government by way of a coalition.

In that election the Socialists captured 123 of the 350 seats in parliament - far ahead of any other party but short of an absolute majority.

"There is no majority (in parliament) that guarantees the formation of a government, which pushes us into a repeat election on November 10," Sanchez said at a press conference.

After almost six months of impasse between the parties, another snap election is set to occur, and the blame game for the lack of a breakthrough has begun.

Sanchez said: "I tried by all possible means but they made it impossible for us."

Pablo Iglesias, the leader of Podemos, which was cited as the likeliest party to help the Socialists form a coalition government, had a different take on proceedings. "Pedro Sanchez had a mandate to form a government. But he didn't want to. Arrogance and disdain for the basic rules of parliamentary democracy have come before common sense," he tweeted.

Iglesias' indignation did not end there. He added: "Pedro Sanchez commits a historical error of enormous dimensions forcing other elections because of an obsession with monopolizing an absolute power that the Spaniards have not given him."

Spain's political outlook has changed in recent years with the addition of two new parties, the center-right liberal Ciudadanos and far-left Podemos, who emerged on the back of corruption allegations circling the country's two traditional parties, the Socialists and the People's Party (PP). In a clear reference to this change in the political landscape, Iglesias' ire continued: "You need a president who understands multiparty politics. Spain has changed and it will not go back."

Podemos and the Socialists tried and failed to agree on a formation, with a sticking point revolving around top positions within the potential government of senior Podemos lawmakers.

Sanchez, meanwhile, said there had been no efforts to form a government with Spain's other two biggest parties, the PP and Ciudadanos.

After a set of inconclusive election results in 2015, 2016 and 2019, as well as the ousting of former Prime Minister Mariano Rajoy in 2018 following a no-confidence vote, Spain's political turmoil has not affected the economy adversely. It remains the fourth largest economy in the euro zone. However, financial analysts say further delays in implementing reforms in areas such as labor and pensions could result in a decline.

The likelihood of a November election was further cemented when Spain's King Felipe VI decided not to grant acting Prime Minister Sanchez, or any other politician, a mandate to form a government.

The impasse might not end there, though. According to the opinion polls, the Socialist Party still remain the most popular party, but are not predicted to gain an overall majority once more.

Pedro Sanchez was unsuccessful in getting parliamentary approval on Tuesday. He has another two days to build an agreement with the far-left Podemos party to secure his government's confirmation. (23.07.2019)

Weary Spaniards go back to the polls

After a four-month impasse filled with bitter bickering between the political parties, the Spanish King has dissolved parliament to pave the way for new elections scheduled for June 26. Martin Delfin reports from Madrid. (03.05.2016)

Caretaker Socialist Prime Minister Pedro Sanchez lost a second confidence vote in Spain's parliament. He has two months to try to win a majority or call yet another election. (25.07.2019)