Barcelona rocked by violence as Catalan protesters clash with police 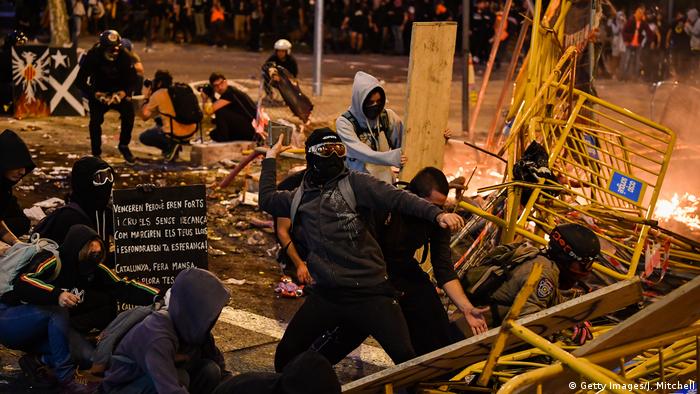 Hundreds of protesters faced off against police in the heart of Barcelona on Friday, assembling fiery barricades and throwing rocks at security forces on the fifth day of unrest following the sentencing of nine Catalan separatist leaders.

The general strike that brought the Catalan capital to a standstill drew over half a million people, according to police estimates, and was largely peaceful for most of the day.

A branch of the Banco Santander bank was also ransacked and metal barriers were set up across other streets.

In response, police fired tear gas, smoke grenades and foam bullets at the protesters and deployed water trucks to pass through the burning barricades.

Spanish daily El Pais reported that 17 people were arrested on Friday. Health authorities reported 62 people, 41 of them in Barcelona, were injured in protests across Catalonia. Spain's Interior Ministry said that more than 200 members of the security forces were injured in the region. 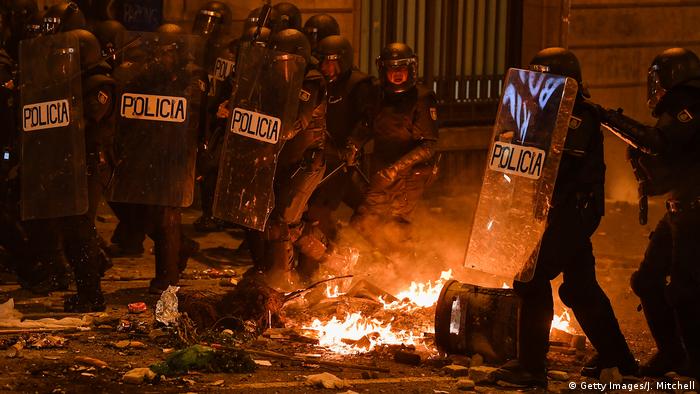 At least four other towns and cities in Catalonia saw clashes as the pro-independence anger showed no signs of slowing, officials said.

The protests also prompted the Spanish soccer federation to postpone an October 26 La Liga match between Real Madrid and Barcelona over security concerns. Volkswagen subsidiary Seat said it had halted production at its plant near Barcelona until Saturday.

Tensions in Catalonia began to spiral on Monday after the Supreme Court in Madrid jailed nine separatist leaders for terms of up to 13 years for their role in the 2017 Catalan independence bid.

The sentencing triggered violent protests, with pro-independence supporters taking to the streets. Authorities in Barcelona said the city had suffered more than €1.5 million ($1.67 million) in damage due to the rioting.

Meanwhile, Catalonia's former leader, Carles Puigdemont, who fled to Belgium after the independence vote in 2017, said he had surrendered to Belgian authorities after Spain reactivated an international arrest warrant against him. Puigdemont was briefly detained before a judge ordered his conditional release.