Barcelona came to a standstill on Friday as thousands of Catalans converged on the city after a three-day march. Despite disruptions to transport and business, the protest remained peaceful. Mercedes Iniguez reports. 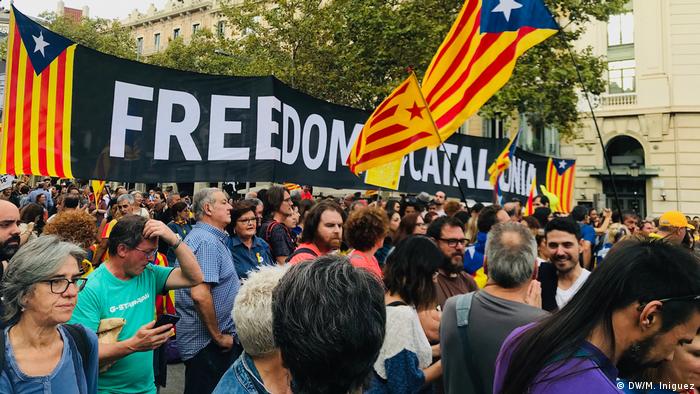 Two days walking with an injury, "but it will hurt me more if I would stay at home." Juan Ragel has been walking for the last two days with one thing in mind: getting to the main demonstration in Barcelona just to be heard. "The feeling of unity is amazing amongst Catalans; all these days people were giving us food and drinks, cheering us from where we march." Though Ragel is from Seville, he has been living in Catalonia for the last 20 years. "You don't need to be Catalan to feel pro-independence," he says.

Participants continued the Marches for Freedom all day Friday, with five columns of demonstrators setting out from different Catalan towns on their way towards the regional capital, Barcelona, bringing traffic to a halt on some major highways. Thousands of marchers have left everything for a few days to protest after the Supreme Court handed out jail sentences to pro-independence politicians. The plan requires walking more than 30 kilometers a day, and several demonstrators only participate in some of the sections and then return home, depending on family and work obligations. Smaller groups of protesters turned violent and clashed with police later on Friday. 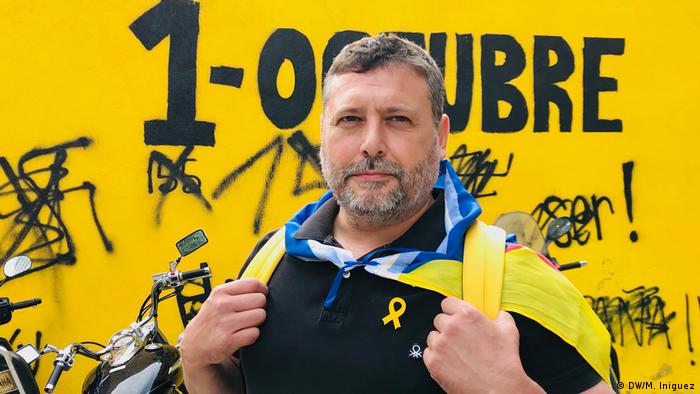 Protester Juan Ragel, who was born in Seville but has lived in Catalonia for two decades: 'You don't need to be Catalan to be pro-independence'

Joan Teixido believes that the "sentence to our politicians in unjust. It is an act of revenge because we have always been a peaceful movement. It is a shame and a warning to Europe. Spain is behaving like China or Turkey." Teixido, who came from the Catalan province of Girona with his friends, defends being in the demonstration "for dignity and for the people who are in prison." Likewise, he does not believe that elections and a new central government will change anything. "Political leaders are very mediocre," he says.

Pablo Simon, political analyst and professor at the Carlos III University of Madrid, believes that at present "the problem we have is the lack of political direction and valid interlocutors." He thinks that "until in Spain, there is a conformed government, and in Catalonia, there are no new elections with a new president who opens the dialogue; the situation does not seem to be resolved. Now we see a scenario of electoral competition between the parties led by the pro-independence groups."

Read more: How fair are the trials of Catalan pro-independence leaders? 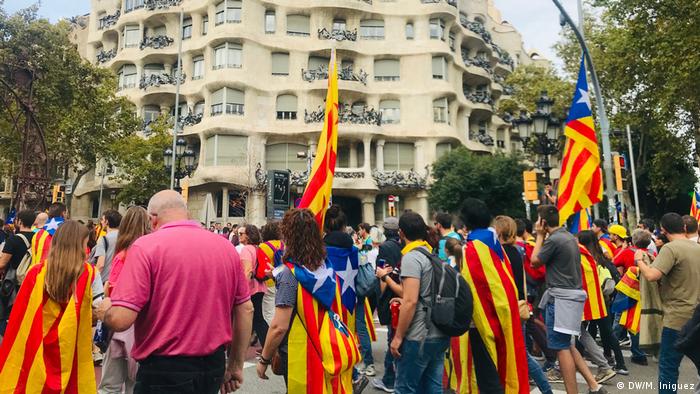 Pro-independence trade unions Intersindical-CSC and IAC called the stoppage shortly before the judges' decision on Monday. They say the reason for the strike is that the longstanding demands have not yet been met, including a higher minimum wage and equality-promoting measures. While neither trade union made any explicit mention of the Supreme Court verdict — the law prohibits unions from calling strikes for political reasons — they say they are committed to Catalonia's national rights, which they also believe affect labor rights.

After 5 p.m., half of a million people, according to local police sources, who had been reunited from all over Catalonia began to walk the streets in a huge and peaceful demonstration. The atmosphere is cheerful, no matter how serious the political moment is. Ingrid Santias is just 15, and she is participating with her father in the protest. "I don't think it is fair what's going on. We are tired, and we want to fight for our country. We want to make a point," she says. 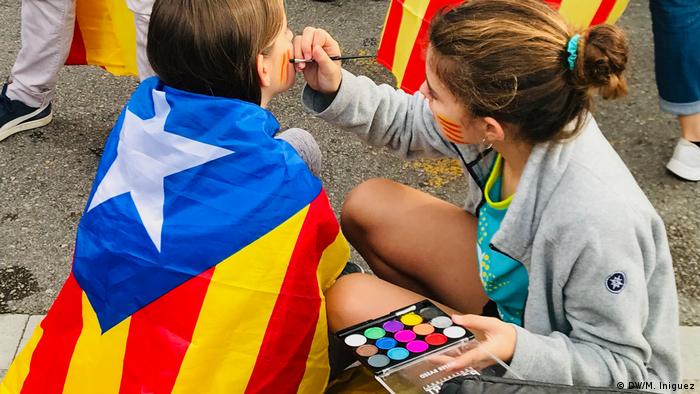 The peaceful protest attracted participants of all ages

Political analyst Simon says that "no one predicted this level of intensity, but it is difficult to maintain it over time. These demonstrations have an essential effect."

Ragel, who is a freelancer and has stopped working in order to attend the demonstrations, considers that "independence is inevitable; it's just a matter of time. We are a peaceful movement and the Spanish government in sending us more police. The violent groups are not us; they are infiltrators."

Nighttime street violence escalated during the week, with clashes between radical protesters and police. The demonstrations have always been peaceful, but the Spanish government has pointed to several "coordinated groups that are using street violence" to create a sense of chaos. Simon explains that associative groups, led by the Catalan National Assembly (ANC) and the Catalan language, culture and independence organization Omnium that "have played a crucial role in the social movement so far."

But the political expert says these groups have also lost strength because they have promoted the mobilization at the limit of their possibilities and also because they have lost their leaders, who are now in prison. And from that void emerges the network of Commitees for the Defense of the Republic (CDR), which are decentralized local organizations, led by a range of people from peaceful elderly individuals to the radical and violent. There is no political leadership, he says — it is complicated to know who is behind it, and the groups' behavior is not homogeneous. "Now it's time to correct the damage to avoid that the situation does not become more complicated."

The Spanish government will deploy more police officers in Catalonia over the weekend "to guarantee security," say sources in the interior ministry, after the episodes of unrest that took place during this week in protest at the sentencing of Catalan independence leaders.

Nevertheless, teen protester Ingrid thinks that "dialogue is still possible and after the general elections on November 10, both parts will start talking."

The jailed Catalan leaders were given a chance to speak for 15 minutes at the end of their trial in Madrid. They denied the charges of rebellion, sedition and misappropriation of public funds, and called for dialogue. (13.06.2019)