How fair are the trials of Catalan pro-independence politicians? | World | Breaking news and perspectives from around the globe | DW | 28.03.2019

How fair are the trials of Catalan pro-independence politicians?

DW's Conflict Zone put this question to Spain's foreign minister, Josep Borrell. During the heated discussion, the politician walked off the set, but came back to finish the interview after speaking to his aides.

Carme Forcadell was the president of the Catalan parliament when it voted to declare the region's independence from Spain in 2017.

Since then, the 63-year-old politician has been arrested, charged with rebellion for her role in the region's independence bid and, according to an interview she gave in December, confined to spending 15 hours a day alone in a 10-square-meter (107.6-square-foot) cell.

Is this the image of Spain that the government in Madrid wants to show the rest of the world?

Asked this question by DW Conflict Zone host Tim Sebastian, Spain's foreign minister said he would have preferred that the judges find another way of preventing Catalan leaders from evading justice.

But Josep Borrell stressed that the trials of Forcadell and other Catalan leaders are independent judicial decisions.

"Here, the judge has decided to implement these measures because he thinks he has to," Borrell said. "So I am not going to decide in the place of judges in Spain."

The foreign minister deflected a question on whether he is turning a blind eye to serious doubts about Spain's judicial system, and instead told Sebastian to "put the right questions" or otherwise he would leave the interview set. 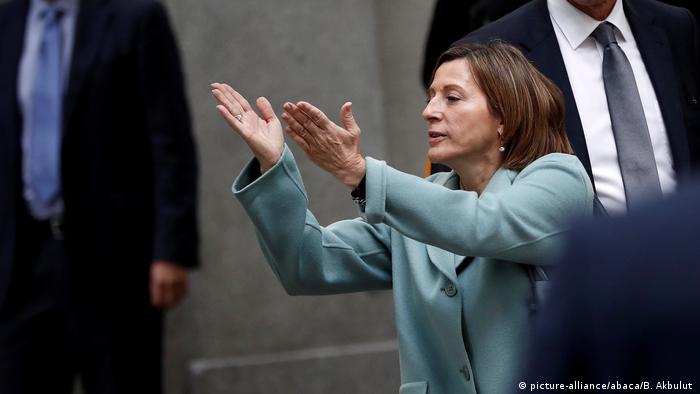 Carme Forcadell was the president of the Catalan parliament. She was arrested and charged with rebellion.

'Against the Spanish constitution'

Borrell did later stress that he doesn't agree with suggestions that the separatists are not going to get a fair trial.

He added that the government has been making a "big effort in order to de-escalate the situation."

"But we cannot give the independence people their right to determination as they are asking for because it is against the Spanish constitution and this has nothing to do with international law," he said. 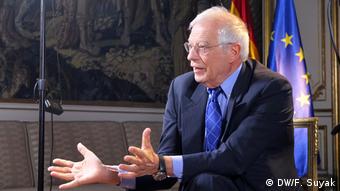 Borrell stopped the interview with Conflict Zone, but returned to the set after a brief discussion with his aides.

But when Sebastian pressed him on reforming the constitution, in particular after a report said a majority of Spaniards were in favor of some kind of reform, Borrell accused Conflict Zone's host of "continuously lying" and stopped the interview.

He returned after a short discussion with his aides.

Sebastian then turned to another controversial topic, namely Spain's decision to go ahead with the sale of laser-guided bombs to Saudi Arabia.

Last year, Spain decided to stop the 2015 deal after an airstrike by Saudi allies in Yemen killed at least 40 children. 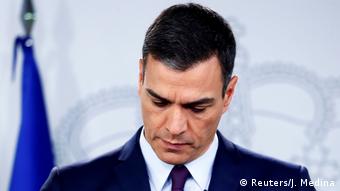 Spain's government decided to honor a contract to sell weapons to Saudi Arabia.

It then changed its mind and decided to honor the contract, despite the criticism from humanitarian groups.

Pressed by Sebastian on whether this argument applies if the weapons are aimed at civilian targets, Borrell said "there is no proof that these kinds of bombs had been used for that."

And he emphasized his government has a committee to make sure that "when we export arms we don't violate any rules." 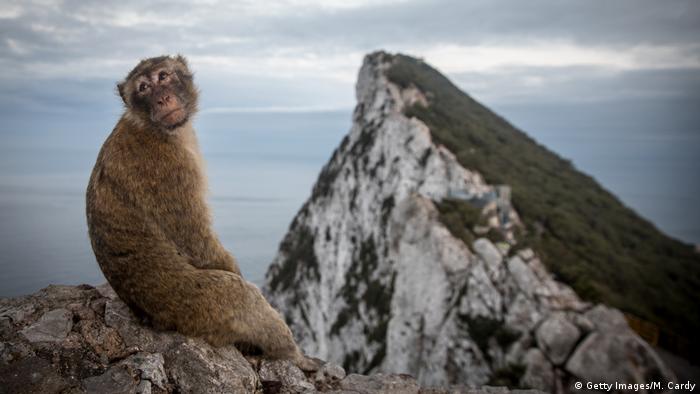 The status of Gibraltar has long been a problem between the United Kingdom and Spain.

Borrell's government also made headlines regarding its position on Gibraltar, a British Overseas Territory at the bottom of Spain, which has long been a problem between London and Madrid.

In November, Spanish Prime Minister Pedro Sanchez renewed calls for shared control over Gibraltar after the UK leaves the European Union, despite the fact that both Britain and Gibraltar have signaled that the issue is not open for debate.

"It will be back on the table but not during the Brexit negotiations," he added.

Borrell accused Sebastian of not being well informed on this issue and asked him at the end of the interview to ask questions "in a less biased way."

To which Sebastian concluded: "I am not here just to give you the questions you want, minister."