Nine of the 12 Catalan separatist leaders are facing charges of rebellion for their role in a failed independence bid in 2017. Former Catalan leader Carles Puigdemont, who led the campaign, is not among the defendants. 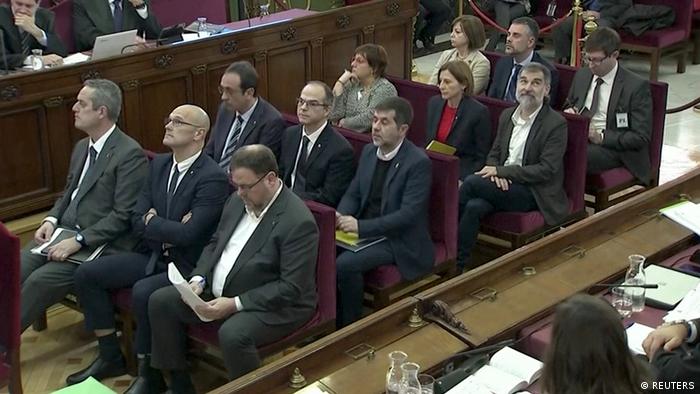 The trial of 12 Catalan secessionist leaders involved in an attempt to secede from Spain got underway in the country's Supreme Court on Tuesday.

The long-awaited trial has re-ignited tensions over the future of Catalonia. Hundreds of police, including from anti-terrorism units, have been deployed around the court building in Madrid.

Catalonia declared independence from Spain in October 2017 following a referendum that had been carried out in defiance of a court ban. The declaration sparked Spain's worst political crisis since the death of dictator Francisco Franco in 1975. 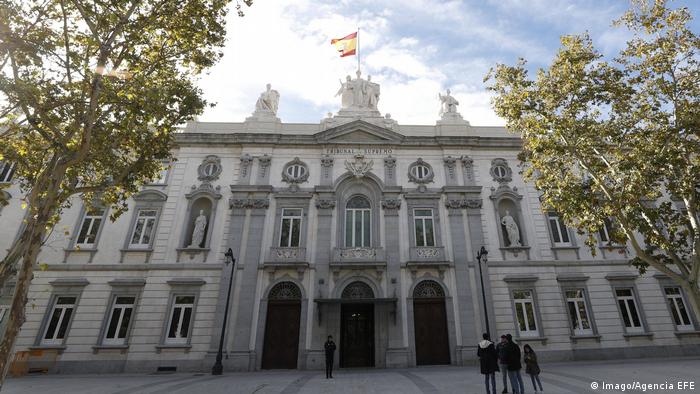 The Supreme Court building in Madrid

The defendants are facing charges of rebellion, sedition and misuse of public funds, charges which carry a jail term of up to 25 years.

Nine of the accused have been jailed without bail since late 2017 and early 2018, including former Catalan vice president and regional economy minister Oriol Junqueras and former speaker of the Catalan regional parliament Carme Forcadell, who read out the declaration of independence in the assembly.

The defendants are not scheduled to speak in court on the first day of the trial, which is reserved for procedural issues.

The trial, which will be transmitted live on national television, is expected to last three months, with the verdicts delivered several months later.

Former Catalan leader Carles Puigdemont, who fled to Belgium days after the independence declaration, is not among the defendants. Spain does not try suspects in absentia for major offences.

In Berlin on Tuesday, Puigdemont said the trial marked a stress test for Spain's democracy.

"I trust, however, that the Spanish state will take advantage of this chance to issue the correct sentence, which is absolution," he said.

Catalan separatists have rejected the trial as a politically motivated "farce."

"The world is looking at Madrid ... what they want is not to judge but to condemn on political reasons," Olivier Peter, a lawyer for one of the accused, told reporters on Monday.

Pro-independence Catalan leader Quim Torra, who will attend the opening session of the trial, called for the acquittal of the defendants.

"We're at the Supreme Court to accuse the Spanish state of violating the civil and political rights of all Catalans," Torra tweeted after holding a banner that read: "Deciding is not an offence."

Secessionists have called on Catalans to briefly stop work at midday on Tuesday in protest against the trial, and to join a rally in Barcelona in the evening. Another major demonstration is planned for the weekend.

On Sunday, tens of thousands of people took part in a mass protest called by right-wing and far-right parties in Madrid against Socialist Prime Minister Pedro Sanchez over his negotiations with Catalan separatists.

Sanchez, who came to power in June with the support of Catalan nationalist parties, had resumed talks which were called off by his predecessor Mariano Rajoy.

But the talks broke down last week after Catalan separatists maintained their demand to hold an independence referendum.

Sanchez's minority government needs the support of Catalan separatist parties to approve its 2019 budget, scheduled to come up for vote on Wednesday.

The separatists have so far vowed to block the bill, which could force Sanchez to call a snap parliamentary poll later this year.

Sanchez said on Tuesday he expected both the right and pro-independence lawmakers to vote against his budget.

"They both want the same: a divided Catalonia and a divided Spain. We are working for a Catalonia in peace and a united Spain," he tweeted.

The verdict is still out on whether Germany will hand ex-Catalan President Carles Puigdemont back to Spain some five months after declaring Catalonia's independence. DW has the lowdown on Catalan secession from Spain. (21.09.2017)

A dusty German children's song has gained new life after Catalans misheard the lyrics as "Viva Puigdemont" and turned it into a viral sensation. The hashtag #BiBaButzemann now leads to posts from the separatist movement. (17.04.2018)

The Spanish government has broken off talks with Catalan secessionists, with both sides accusing the other of intransigence. Prime Minister Pedro Sanchez had already faced criticism for agreeing to hold the talks. (08.02.2019)