A dusty German children's song has gained new life after Catalans misheard the lyrics as "Viva Puigdemont" and turned it into a viral sensation. The hashtag #BiBaButzemann now leads to posts from the separatist movement. 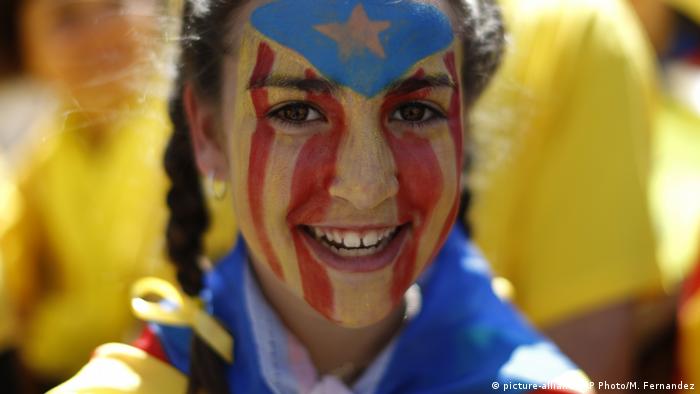 A German children's song has become a beloved anthem of Catalan separatists. A woman listening to the radio broadcaster RAC-1 noticed a lyrical similarity between the chorus "Bi-Ba-Butzemann" and the chant, "Viva Puigdemont" ("Long live Puigdemont," a reference to the ousted president of Catalonia).

After the broadcaster played the song repeatedly, the original German folk song went viral on You Tube and Twitter.

Although Germans would say you'd have to bend your ear quite a bit to hear "Viva Puigdemont" in the lyrics, in Spanish, the V and B are pronounced similarly, turning "Bi-Ba" into "Viva."

People in Catalonia went on to adapt the text at demonstrations held over the weekend, where the melody was played by a variety of musical instruments, including the accordion and drum duet seen in the tweet below.

In one video montage making the rounds online under #bibabutzemann, clips of Spanish Prime Minister Mariano, dancing at a wedding, are spliced with the song over the top.

In the German traditional folk song, children sing the lyrics "Es tanzt ein Bi-Ba-Butzemann" in alliteration as they tell of a Bogeyman who comes in at night. He dances and shakes his hips in the hallways of a house just before bedtime, distributing apples from a sack to all the good kids.

First appearing in Germany in a book by one of the Grimm brothers in 1808, the song was used as a warning to stay away from the demons, who will tempt them.

Puigdemont's €75,000 bail fee has been met and the former Catalan leader has left detention in Germany. He could still be extradited to Spain on charges of misusing state funds. (06.04.2018)

Germans are very attached to the books they grew up with as children, which is why they often end up reading these classics to their own kids later on. Here are some of the country's most famous authors. (13.12.2017)