Catalonia separatist Carles Puigdemont, who fled Spain after a 2017 secession attempt, has been banned from standing in the EU elections. He and two colleagues had wanted to advance the case for Catalan independence. 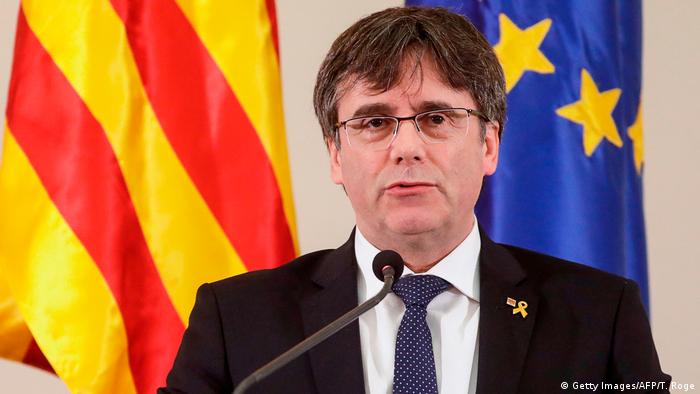 Spanish election authorities have banned the Catalan former President Carles Puigdemont from running as a candidate for the European Parliament.

Puigdemont and two former colleagues in the regional government had wanted to highlight the cause of Catalan independence on an international stage, after secessionist efforts were swiftly quashed by Madrid in 2017.

Clara Ponsati and Toni Comin, who both served as ministers under Puigdemont and who also left Spain in 2017, were also prevented from standing.

Spain's central electoral commission, the JEC, ruled Monday that the three candidates were not eligible to run as candidates given that they were not registered as Spaniards living abroad, but that they were outside their own country "to escape the process of justice."

The three have denounced the ruling as a "flagrant violation of their rights," claiming that it was proof of collusion between the judiciary and "certain political interests."

Puigdemont's Junts per Catalunya party (Together for Catalonia) accused electoral bosses of wanting to "silence and push aside" Puigdemont "so that he can't explain what he represents at the heart of European institutions."

The decision by Spain's central electoral commission, the JEC, was not unanimous. The commission president, vice president and two other members together issued a separate decision that the three banned politicians should not necessarily be ineligible on the grounds of "criminal rebellion."

All three of the banned politicians were part of the push to hold an independence referendum in October 2017, which Spain declared invalid. The referendum in the wealthy northeastern region — which the secessionists won with a small margin — was followed by a short-lived declaration of independence.

After then-Spanish Prime Minister Mariano Rajoy responded by imposing direct rule on Catalonia from Madrid, Puigdemont fled to Belgium. He faces arrest if he returns to Spain, with numerous other colleagues who stayed in Spain currently in prison.

It also emerged on Monday that Puigdemont had been barred from entering Canada a month earlier, after he was invited to visit by a Quebec separatist group.

The move to ban him from Canada was denounced as "shameful" by the Saint-Jean-Baptiste Society, a group that promotes Quebec independence. It had invited him to tour the largely French-speaking province.

Puigdemont had been due to land in Montreal on April 2, but he was told by email several days earlier that his electronic authorization to enter had been revoked.

A Canadian government official said politics played no part in the decision and declined to comment on the individual case, citing privacy laws.

Pro-separatists in Spain have protested the trial of 12 Catalan leaders with rallies, clashing with police and blocked roads and railways. Several people have already been arrested in the region-wide strike. (21.02.2019)

The protesters have decried the trial of 12 Catalan separatists, saying "self-determination is not a crime." Prosecutors have accused the separatists of "rising up in a violent and public manner," allegations they deny. (16.02.2019)

Thousands march in support of Catalan politicians on trial

Supporters of Catalan politicians on trial over an attempted secession from Spain have taken to the streets in Madrid. Catalan independence is set to play a major role in Spain's upcoming national election on April 28. (17.03.2019)