China has banned exports of black clothing to Hong Kong, media report. On Thursday, security dragged lawmakers out of the regional parliament for demanding an inquiry into an attack on a human rights activist. 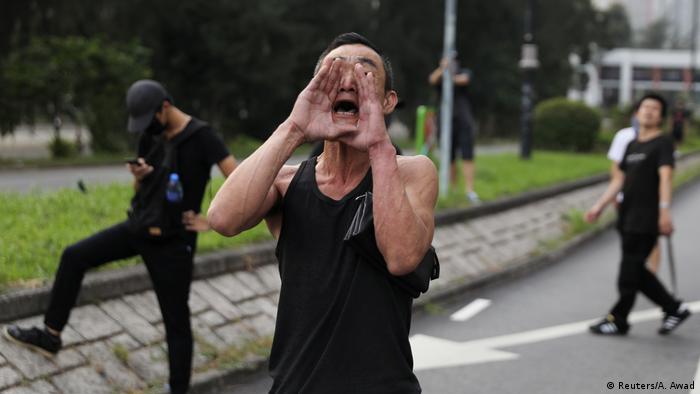 On Thursday, the South China Morning Post reported a Chinese ban on the export of black clothing from mainland distributors to the semiautonomous territory of Hong Kong, where protesters have demonstrated for four months. Many did so stylishly — and strategically — dressed all in black: from their sneakers to their jeans to their T-shirts to their face masks.

The Post cited a July 11 notice to Guangdong courier company PHXBUY, in which mainland officials halted delivery of several products. "They include yellow helmets, yellow umbrellas, flags, flagpoles, poster banners, gloves, masks, black T-shirts, metal rods, fluorescent tubes, bludgeon clubs," according to the newspaper, a subsidiary of Alibaba Group Holding Limited. "We cannot take delivery of the above products. ... Thank you for supporting us."

The yellow helmets and umbrellas have served double duty in previous waves of protests in Hong Kong — functioning both as symbols of demonstrators' desire for democracy and as protection for their heads.

Alibaba is a mainland conglomerate. Central government officials are embedded in the company.

The report came a day after Jimmy Sham, a public face of the democracy movement, suffered an attack by five assailants armed with knives and hammers, which left him bloodied and lying in the street on Wednesday night. Doctors expect Sham to make a full recovery after the attack.

In September, at least two people, including a 15-year-old boy, assaulted Sham and his assistant while they dined in a cafe. That attack did not leave him injured.

The pro-democracy lawmaker Claudia Mo said the attackers had hoped to intimidate protesters and incite violence ahead of a major march scheduled for Sunday. "This very vicious attack took place practically on the eve of the call for yet another massive protest in Hong Kong on Sunday," Mo said in the territorial parliament on Thursday. "We can't help feeling that this entire thing is part of a plan to shed blood on Hong Kong's peaceful protests."

The protests in Hong Kong began as residents grew increasingly concerned that the central government had begun eroding the 50 years of freedoms promised when Britain handed the city-state over to China in 1997. The demonstrations have become the biggest popular challenge to President Xi Jinping since he took office in 2013.

Police and allied groups that operate without uniforms have shot and wounded two people and injured thousands more by other means. Officers have arrested more than 2,300 people since June.

mkg/msh (Reuters, AP)DW's editors send out a selection of the day's news and features. Sign up here.

Germany announces tightening of coronavirus restrictions until Christmas 3m ago