China's 70th anniversary celebration showed a nation confidently moving forward on its own terms. If we in the West find that unsettling, we need to realize we have played a part in China's rise, says Frank Sieren. 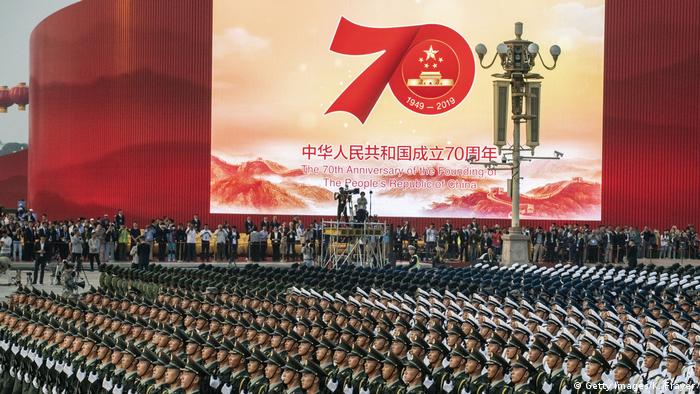 Alongside dancers, flag-waving veterans and many colorful floats representing China's provinces, the People's Republic of China also brought out 15,000 soldiers, 580 tanks, drones, intercontinental ballistic missiles and fighter jets for its celebration of the founding of communist China 70 years ago. It was the largest military parade in the country's history.

In his speech to the nation, Communist Party Chairman and President Xi Jinping proclaimed, "No force can stop the Chinese people and the Chinese nation forging ahead." Still, at the same time, he said the country would, "follow the path of peaceful development." Referring to his country's policy of opening to the world, he said China would, "work with people in all countries to build a community with a shared future for mankind."

The West's fear of China

In the West, the first statement drew decidedly more attention than the second, mainly because it echoes our deep-seated fears. Of course, Xi's "rebirth of the great Chinese nation" means that we must cede some global influence. Something similar happened in the 1980s, when Japan emerged as a global economic powerhouse. Today, books with titles like "Death by China" (written by US President Donald Trump's trade advisor Peter Navarro) populate bookstore shelves. One bestseller in the 80s was titled, "The Coming War with Japan."

Yet, China's power today is far larger — unlike Japan, China is home to the world's largest growing market and has favorable production conditions. Both are desperately needed for the West's market growth and purchasing power.

Unfortunately, China's rise comes at a turbulent time for the West. Two of the region's oldest democracies — the US and UK — have greatly contributed to the general loss of Western influence across the world with protectionist jingoism and impulsive politics.

The government in Beijing is likely watching this development with both glee and concern. In any case, it is not China's fault. Nevertheless, in the West we need a name to attach to our fears, and that name is China. The days of unassailable Western global market leadership, and with that the role of determining global values, are long gone.

More censorship than ever, but few feel oppressed

Yet, for most Chinese the country's ascent means they have more freedom to live their lives as they wish, albeit with strict limitations. And that is why most Chinese who study abroad return home after they attain their degree. They just don't see what we are so worked up about.

It should come as no surprise when communist China strides more confidently on the world stage, it is normal for a country of its size and economic trajectory. Importantly, one thing that is surprising is the fact that China's rise is peaceful. True, China wants to play a more influential role in the global economy, but that desire does not spring forth purely from a desire for power. It comes from necessity.

China must ensure that its economic growth continues. Unlike Russia or the US, Beijing has shown itself to be largely peaceful, prescient and pragmatic over the past several decades. Domestically, economic growth has created more freedom. Large swaths of Chinese society, however, are kept on a very short leash. China's security apparatus has been continually expanded since Xi assumed power in 2013. Critics and dissidents live under threat like never before. And censorship has never been undertaken with such great technical and human effort.

China's rise, however, would not be possible if the majority of citizens had the feeling they were being oppressed and exploited. The Chinese are seemingly willing to make compromises in exchange for more security and order. It will be up to them to determine if the current path is the best way forward. In any case, the country will have to master a number of major challenges over the coming years. And sooner or later, Beijing will have to get used to protests like those going on in Hong Kong — even in mainland China.

A decisive factor for the future

No one can see into the future, but it seems clear that in the years ahead no country will have more influence over our future — the future of Germany and Europe — than China.

And we as Germans have serious issues with the fact that for the first time in more than a century the course will be determined by a non-Western power. That means we will need to learn to make compromises. And it also means we will have to proceed more diligently and skillfully if we intend to convincingly cement the values of individual freedom, law and order, social security, freedom of religion, and freedom of the press in the new world order. None of those values can be taken for granted. The Chinese will question every one of them.

So how can we as Germans ensure that we maintain as much influence as possible over global rules? We will have to learn to find shared interests with other players, building coalitions with China, the US and even Russia to attain our aims. If China wants to fight climate change, we shouldn't hesitate to work with them. If the US fights for freedom of expression, we should join them. The clash of systems that has been so oft talked about of late will make no sense in the new world order.

Unfortunately, the world has gotten more complicated. We can no longer hide behind allies. The days of the immutable community of shared values are gone. Still, one thing is certain: More than any time in the past, the future will be decided globally — by the majority. And if the future belongs to the majority, China will naturally play a central role.

DW's Frank Sieren has lived in China for over 20 years.

Deng Xioaping's ex-interpreter: 'In total, Chinese changes for the better'

Mexico: Journalist shot to death in latest attack on media workers 4h ago

WHO: Pregnant women and children vulnerable to monkeypox 10h ago