Thousands gathered in cities around Indonesia to protest plans to criminalize premarital sex and weaken the country's corruption-fighting agency. Lawmakers want to pass the vote before their terms end this month. 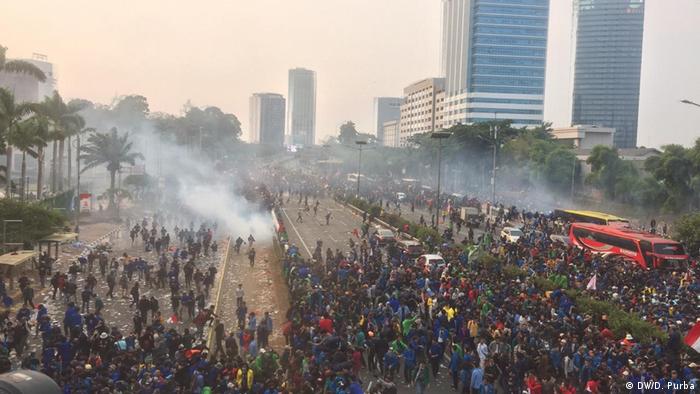 Police used tear gas and water cannon on protesters as tens of thousands gathered nationwide on Tuesday to protest a controversial vote on Indonesia's penal code.

Authorities' response resulted in numerous demonstrators being taken to hospital with injuries such as broken bones, head wounds and respiratory problems due to the tear gas.

Outside the parliament building in the capital city of Jakarta, protesters with flags and posters gathered to meet with parliament speaker Bambang Soesatyo. In a press conference, the speaker called for peace but did not confirm whether the vote would be delayed until a new parliament takes office in October.

Following his statements, the police fired water cannons and tear gas to disperse the crowds.

Police in Bandung in West Java also fired tear gas at protesters, who were throwing rocks at police officers.

Student protesters in the capital started gathering on Monday evening. They blocked traffic and damaged a fence. Over 5,000 police offers have been deployed in Jakarta in response.

On Tuesday, parliament debated changes to Indonesia's penal code. It would be the first update since the country's Dutch colonial era.

Conservative Islamic groups pushed earlier this year for an overhaul. Proposed changes would outlaw premarital sex, limit the sale of contraceptives, make it illegal to insult the president, and create prison terms for performing black magic or having an abortion that is not due to a medical emergency or rape. It would also strengthen blasphemy laws in the Muslim majority country.

Due to public outcry, President Joko Widodo ordered the vote, originally scheduled for Tuesday, to be delayed. But some lawmakers say they will try to provide a new draft of the bill before their terms end in September.

Parliament is also debating a separate bill that critics say would weaken the country's anti-corruption agency by curtailing its right to wiretap without a warrant. Corruption is a rampant problem in Indonesia.

"We're going to parliament to oppose the new law for the anti-corruption agency that are not pro-people but are pro-corruptors," said Fuad Wahyudin, 21-year-old student from West Java. "The criminal code is the same. It doesn't side with the people."

The vote's delay coincides with a decision by the Australian Embassy in Jakarta to issue a travel advisory for Indonesia. The embassy warns that the new legislation could cause problems for unmarried or homosexual tourists, who could face jail time under the new laws. Tourism to Bali and other beach locations draws millions of people to Indonesia every year.