On September 24, Germans head to the polls in a parliamentary vote that will determine whether Angela Merkel remains chancellor. DW breaks down the ins-and-outs of the Bundestag election process.

The 2009 and 2013 parliamentary elections saw a significant drop in German voter turnout to around 70 percent, but with the rise of the populist movement that draws on non-voters in all democratic states, the numbers are expected to rise this year.

This year, 61.5 million people age 18 and above are eligible to vote in the national election, according to figures from Germany's Federal Statistics Office.

Of those, 31.7 million are women and 29.8 million are men, with some 3 million first-time voters. Over a third of Germany's electorate — 22 million people — are over 60 years old, meaning the older generation often has particular sway over the election outcome.

The largest number of eligible voters live in the western state of North Rhine-Westphalia (13.2 million), followed by the southern states of Bavaria (9.5 million) and Baden-Württemberg (7.8 million). 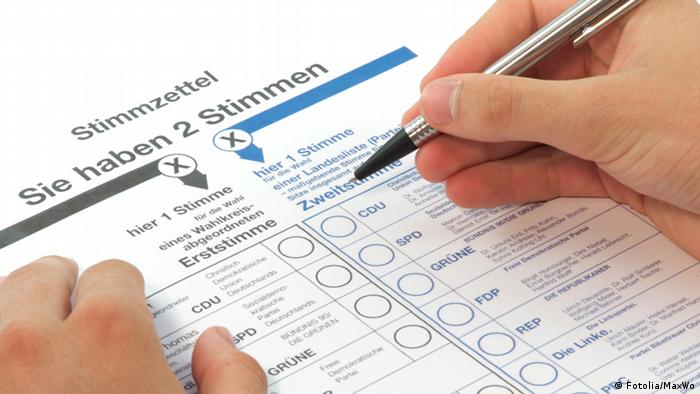 Read more: How does the day of polling work? And who counts the votes?

When Germans head to the polls on September 24, they'll receive a deceptively simple ballot with two choices - one for a district representative and one for a party.

The first vote or "Erststimme" for the district representative, follows a first-past-the-post system like elections in the United States. The voter selects his or her favorite candidate to represent their district in the parliament. Every candidate who wins one of Germany's 299 constituencies - which are divided up per 250,000 inhabitants - is guaranteed a seat.

German states with larger populations get to send more representatives to the Bundestag than the smaller ones.

What makes the elections particularly interesting is that the ballot allows voters to split their vote amongst parties, perhaps voting for their local CDU candidate in the first vote, but casting their ballot for the free market liberal Free Democrats (FDP) in the second vote, to help the CDU's traditional small coalition partner to get into parliament. 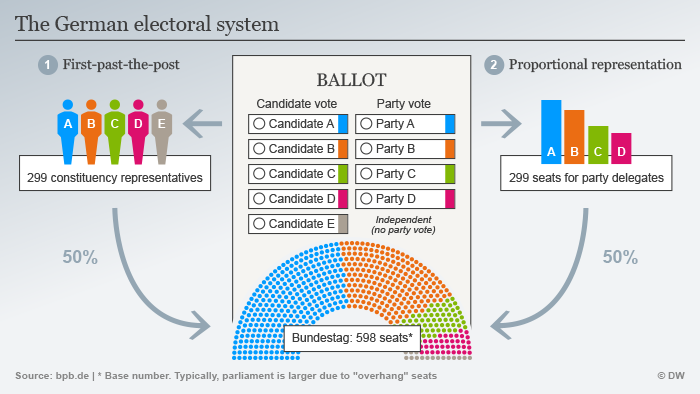 Sometimes, a party will receive more direct parliament seats through the first vote than they deserve according to the party vote. Since each candidate who wins a district is guaranteed a seat, the party gets to maintain those "overhang" seats.

Other parties then also get more seats to make up for this, ultimately making the parliament larger than its base number of 598 seats.

Due to this, there are currently 630 seats in the Bundestag. 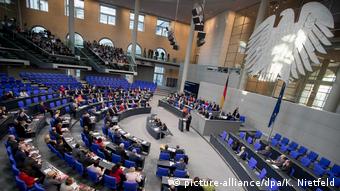 In order for a party to enter the Bundestag, it has to win at least 5 percent of the second vote. This system was put in place to prevent smaller splinter parties - like those that bogged down the Weimar Republic in the 1920s - from entering parliament.

The "five percent hurdle" has served to keep the far-right NPD and other extremist parties out of the Bundestag until now.

Currently, there are five parties represented in the Bundestag: Chancellor Angela Merkel's center-right CDU and its Bavarian sister-party the Christian Social Union (CSU), the center-left Social Democrats (SPD), the Left Party and the Greens.

There are two key 5 percent threshold races to watch in the German elections this year: In 2013, the business-friendly Free Democrats (FDP) failed to make the 5 percent hurdle but may be able to reenter parliament this time around based on recent state election wins.

The other party to watch out for is the right-wing populist anti-immigrant Alternative for Germany (AfD) which also failed narrowly to enter the Bundestag in 2013, when they had been campaigning on a euroskeptic platform. Since then, however, the party has gathered enough support to have a presence not only in the European Parliament, but also in 13 out of Germany's 16 state parliaments. 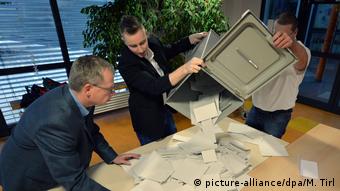 There are strict regulations for the counting of ballots

If, as in the previous three elections, the CDU wins the majority of the vote, their candidate for chancellor, Angela Merkel, will hold the post for the next four years. In Germany there is no limit to the number of terms a chancellor may be in office. But so far no chancellor has served more than 16 years in total since Chancellor Helmut Kohl.

A Berlin-based voting rights group has begun a campaign to expose the scarcity of German parliamentarians with migrant origins. Citizens For Europe says "every political party" must improve its representation. (23.02.2017)