The upcoming new security law for Hong Kong is Beijing's most massive move so far toward curbing the democracy movement there. This is what the law is all about and why it is being criticized. 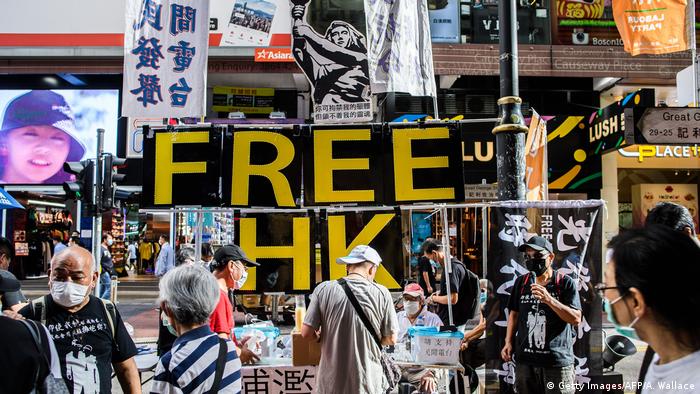 The decision, with 2,878 votes in favor, one against and six abstentions, was formally limited to instructing the Standing Committee of the NPC to draft a national security law for Hong Kong.

What the NPC officially voted through was a "Decision on establishing and improving the legal system and enforcement mechanisms for the Hong Kong Special Administrative Region (HKSAR) to safeguard national security."  In other words, the security of the whole of China is to be protected by measures and legislation specifically related to Hong Kong.

Once drafted, these individual provisions will be added to the Annex to the Hong Kong Basic Law. They will thus also become legally valid in Hong Kong, which theoretically has extensive autonomy in internal affairs. Experts expect this to happen in the course of the summer.

What does the new security law entail?

According to the state news agency Xinhua, the new law has the following objectives: It aims to "prevent, stop and punish acts and activities endangering national security." Such acts include those intended to "split the country, subvert state power, organize and carry out terrorist activities and other behaviors that seriously endanger national security." China also "resolutely opposes the interference in the HKSAR affairs by any foreign or external forces in any form and will take necessary countermeasures "

One particularly controversial point is that the NPC decision in future provides for "national security organs" of the mainland to be able to establish — "if necessary" — agencies in Hong Kong to fulfill their "duties to protect national security in accordance with the law." Mainland officials would then have police powers in Hong Kong, a departure from previous practice. Critics doubt whether they would be restricted by local Hong Kong laws.

Can Beijing actually decide a security law for Hong Kong — and why now?

Yes, Beijing can use the Hong Kong Basic Law and the Chinese constitution as a legal basis. According to the latter, the Hong Kong Special Administrative Region is part of China. Article 18 of the Basic Law states that Chinese national laws are also applicable in Hong Kong when they are included in Annex III of the Basic Law. The inclusion and removal of such national laws is decided by the NPC Standing Committee in consultation with the Hong Kong government. As the latter is hand-picked by Beijing, resistance from this side is not to be expected. On the very day of the vote, the Hong Kong government welcomed the NPC decision and pledged its cooperation.

Hong Kong, or its parliament (LegCo), was actually required by the Basic Law to pass a security law of its own for the SAR. However, that never happened. In 2003, a government initiative to this effect drove half a million Hong Kong citizens onto the streets to protest against the feared erosion of autonomy rights.

From Beijing's point of view, the LegCo elections next September pose a "danger" in that the pro-democracy bloc might win a majority in the city parliament, which would cause the failure of any renewed attempt by the government to push through its own security law. That is why Beijing has imposed this solution. However, Beijing wants to maintain the appearance of Hong Kong's autonomy and continues to insist that Hong Kong pass its "own" corresponding law. At best, however, such legislation could only supplement the national law and never compete with it.

Why are people in Hong Kong so afraid that the security law will be misused?

Up to now, if Hong Kong citizens have been dissatisfied with the central government and the Hong Kong city government and have taken to the streets in peaceful protest, they could be sure that they were exercising their fundamental right to freedom of expression and demonstration and would not be prosecuted. If the new security law comes into force, the same behavior might under certain circumstances be interpreted as "subverting state power."

The question is whether any ensuing legal proceedings would be fair and transparent. The hearings could take place behind closed doors because "national security" would be affected.

There is also concern that any Hong Kong citizen who ever took to the streets to protest against the Beijing central government or who has made negative comments about the Chinese Communist Party could be prosecuted.

Just before the 31st anniversary of the Tiananmen Square massacre, a new struggle for freedom is raging in Hong Kong. Writers and journalists fear censorship by the Chinese security law. (03.06.2020)