The Chinese parliament has approved plans for a bill that threatens to limit freedoms in the semi-autonomous state. The move will bypass Hong Kong's internal legislature to punish acts that subvert state power. 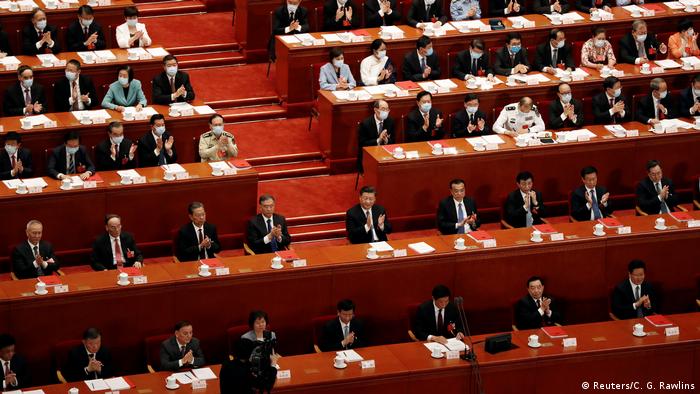 The National People's Congress (NPC) voted overwhelmingly in favor of the proposal to draft the law, with 2,878 in favor and one against. Six people abstained.

The vote approves the standing committee to draft legislation to punish secession, subversion of state power, terrorism and acts that endanger national security in Hong Kong.

Lawmakers in the Great Hall of the People erupted into sustained applause when the vote was tallied.

Critics, including Hong Kong democracy advocates, have long argued that such measures will erode the territory's autonomy upheld in a "one country, two systems" formula since its return to Chinese rule in 1997.

Beijing has asserted the law change will be tightly focused and non-threatening. Its plan includes outposts of mainland agencies to curb what Beijing calls interference by foreign countries.

In Hong Kong — as the People's Congress voted — police squads were out in force and dozens of protesters chanted slogans in a shopping mall. But there was no repeat of Wednesday's disturbances that saw police make 360 arrests as thousands protested China's moves that would also criminalize mocking of the Chinese national anthem.

Responding to the result of the vote, Chinese Premier Li Keqiang would benefit the territory’s long-term stability and prosperity. He reaffirmed that "One country, two systems" is China’s national policy when asked if his country was abandoning it.

Meanwhile, the Commissioner’s Office of China’s foreign ministry said it was "most barbaric" that Washington has responded to the security bill by revoking Hong Kong’s special status.

Earlier on Thursday, US Secretary of State Mike Pompeo had said Hong Kong no longer qualified for its special status under US law, unnerving investors. Hong Kong and US have a special trade agreement that grants the city-state economic privileges not enjoyed by China. The arrangement had also provided China and the US with indirect access to each others’ markets.

The Commissioner’s office said it rejected the US interpretation that Hong Kong was no longer autonomous. The US should stop meddling in affairs between China and Hong Kong, it said.

Jürgen Hardt, a foreign policy expert with Angela Merkel's Conservative party in the Bundestag, told DW that the law "is harming significantly the agreement between China and the United Kingdom concerning the status of Hong Kong"

Going forward, the European Union and China needed to find "win-win options" for both sides, but "linking that to other questions." "For us, fair relations also have to have in mind that business plans and not political decisions of a communistic party have to set the agenda of economic cooperation," Hardt added.

The planned EU-China summit in the autumn should be used by the EU-27 to speak with one voice and express a joint strategy. Concerning China's belt and road initiative, Hardt said that "having a landline between Europe and China is a good idea." But  linking political questions with such an economic project is not what we can accept."

Japan's foreign ministry said it was "seriously concerned" about the move.

On Tuesday, the EU had urged China to respect Hong Kong's autonomy.

"We attach great importance to the preservation of Hong Kong's high degree of autonomy in line with the Basic Law and international commitments," said European Council President Charles Michel, who represents European governments.

EU foreign ministers are expected to discuss the development at their regular meeting on Friday.

This is a breaking news story and will be updated as more details become available.

Demonstrators in Hong Kong are protesting a bill that would make it illegal to abuse the Chinese national anthem. Police have fired pepper ball rounds into crowds that tried to gather near the city-state's legislature. (27.05.2020)