Demonstrators in Hong Kong are protesting a bill that would make it illegal to abuse the Chinese national anthem. Police have fired pepper ball rounds into crowds that tried to gather near the city-state's legislature. 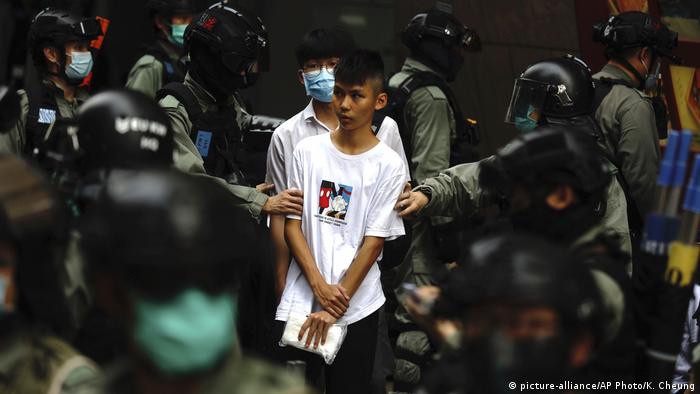 Hong Kong police on Wednesday fired pepper ball rounds into crowds that had gathered in the city's commercial district to protest a bill that would criminalize mocking the Chinese national anthem in the semi-autonomous city-state.

Demonstrators had gathered for the protest early Wednesday. A few hundred protesters chanted slogans during a lunchtime rally, but dispersed after police fired multiple rounds of the projectiles, which release an irritant similar to pepper spray.

On Tuesday, protesters online had called for demonstrators to create dysfunction in the city in attempt to derail the second reading of the bill, which would apply a prison sentence and financial penalty to anyone who "mocks or misuses" China's national anthem "March of the Volunteers."

'People will not stop fighting'

Speaking with DW, leader of Hong Kong's pro-democracy Civic Party Alvin Yeung said that his camp is united in its opposition to the national anthem law.

"You do not regulate people or restrict people from disrespecting a national anthem or even a country. You earn your respect," he said. "You do not make a law to make people respect you."

The law undermines Hong Kong’s high degree of autonomy and the freedom that has allowed the city to flourish, Yeung said.  "Hong Kong people will not stop fighting," he said. He believes people will continue to speak out, pointing to the months of sometime-violent protests over a controversial extradition bill that rocked the city last year.

"This year, when it comes to national security, people are equally angry about it," he said.

But China has maintained that the security laws do not pose a threat to Hong Kong's autonomy and that the laws will have a narrow focus.

What is the bill?

If passed into law, the bill would govern when the Chinese national anthem is played and behavior related to it in Hong Kong.

The bill states that "all individuals and organizations" should respect the national anthem and play it and sing it on "appropriate occasions."

Primary and secondary schools would also be required to teach the song, as well as its history and etiquette.

Critics argue that the national anthem bill would curtail freedom in the city.

Following the announcement of the new national security measures last week, the bill is also the latest development in in what many in Hong Kong see as increasing attempts by China to interfere in the special administrative region,

Beijing maintains that the law is intended to boost patriotism and foster the country's socialist values.

The bill is expected to be turned into law next month.