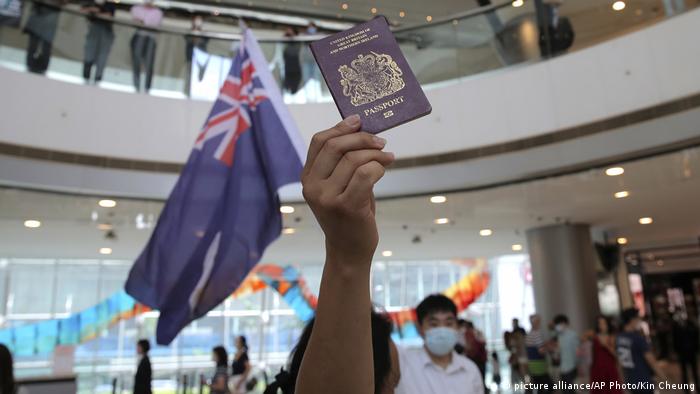 British Prime Minister Boris Johnson said Wednesday that the United Kingdom will not "walk away" from the people of Hong Kong if Beijing imposes new security legislation on the former British colony.

The UK is concerned that the proposed law will jeopardize institutions an independent judiciary and a free press that underpin Hong Kong's position as a global business hub.

"Hong Kong succeeds because its people are free. They can debate and share new ideas, expressing themselves as they wish. And they live under the rule of law, administered by independent courts," Johnson wrote in a column published Wednesday by the Times of London newspaper.

"Many people in Hong Kong fear that their way of life — which China pledged to uphold — is under threat," Johnson continued.  "If China proceeds to justify their fears, then Britain could not in good conscience shrug our shoulders and walk away; instead we will honor our obligations and provide an alternative."

The move would allow 350,000 BNO holders 12 months of visa-free access to the UK and extend the eligibility for a BNO passport to around 2.5 million people in Hong Kong.

Johnson said BNO passport holders from Hong Kong would be given "further immigration rights, including the right to work, which could place them on a route to citizenship."

BNO passports were issued to people in Hong Kong before the territory was handed back to China in 1997 after 150 years of British rule.

On Tuesday, Raab said he had contacted members of the "Five Eyes" intelligence-sharing alliance, comprising Australia, New Zealand, the United States and Canada, about contingency plans and the possibility of "burden-sharing" if the security law causes a "mass exodus" from Hong Kong.

On Wednesday, Chinese Foreign Ministry spokesman Zhao Lijian said that the UK should "abandon their Cold War mentality and colonial mindset,” and "recognize and respect the fact that Hong Kong has returned" to China.

Read more: Opinion: Tiananmen has always served as a moral to learn from

Zhao said London must "immediately stop interfering in Hong Kong's affairs and China's internal affairs, or this will definitely backfire."

Hong Kong has been rocked by sometimes violent pro-democracy protests over the past year.

Beijing says its proposed national security law, which will bypass Hong Kong's legislature, is a response needed to stop "terrorism and separatism" by targeting "secession, subversion of state power, terrorism and foreign interference."