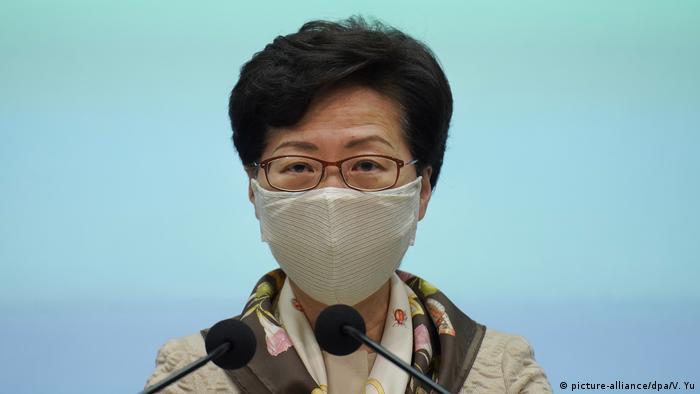 Hong Kong leader Carrie Lam accused foreign governments on Tuesday of "double standards" in their reaction to China's plans to implement controversial national security laws in the city, referring to the response to anti-police brutality protests in the United States.

"We have recently seen these kinds of double standards most clearly with the riots in the United States," Lam said.  "We can see how local authorities have reacted. But then last year when we had similar riots in Hong Kong, what was their position?"

The US, Britain and other Western countries heavily criticized police crackdowns on anti-government protests that gripped Hong Kong last year. The US has also slammed Beijing and pledged to revoke special trade privileges for Hong Kong, due to the introduction of a national security law, which critics say erodes the city's autonomy. Hong Kong and Beijing authorities have insisted that rights and freedoms will be preserved.

Tensions between Washington and Beijing come amid ongoing trade negotiations.

"They take their own country's national security very seriously, but for the security of our country, especially the situation in Hong Kong, they are looking at it through tinted glasses," she told a weekly news conference.

US President Donald Trump, arguing that Hong Kong was no longer sufficiently autonomous from Beijing as promised at the time of the 1997 handover of the territory by Britain, said Hong Kong will no longer be treated differently from China under US law.

The security law could also allow Chinese intelligence agencies to expand their presence in the global financial hub.

In the US, police fired tear gas and rubber bullets near the White House on Monday to disperse peaceful demonstrators protesting the killing of George Floyd, an unarmed black man, while in custody of Minneapolis police. Meanwhile, dozens of US cities remained under curfew, not seen since the riots after the 1968 assassination of Martin Luther King Jr.

Protesters in Hong Kong have been demonstrating for universal suffrage and an independent inquiry into how police handled the protests, after police were accused of disproportionate use of force. Hong Kong, where protesters reject the description of the demonstrations as riots, has not enforced any curfews.

A documentary chronicling Hong Kong's mass pro-democracy protests in 2019 has rekindled people's memories associated with the brutal police clampdown on the demonstrations.

Authorities in Hong Kong have called in building teams to construct isolation units as hospitals there grapple with a new spike in cases. Meanwhile, Australia is opening to tourists once again. DW has the latest.

The US president has signed an order to ensure US citizens are prioritized in the distribution of US-made vaccines before other countries. They will also receive the doses for free. Follow DW for the latest.