Hezbollah accuses Germany of giving in to US, Israel with ban

The leader of Lebanon's Hezbollah movement has accused Germany of kowtowing to US and Israeli interests with its new ban on the shiite organization. He says Hezbollah hasn't been active in Europe in years. 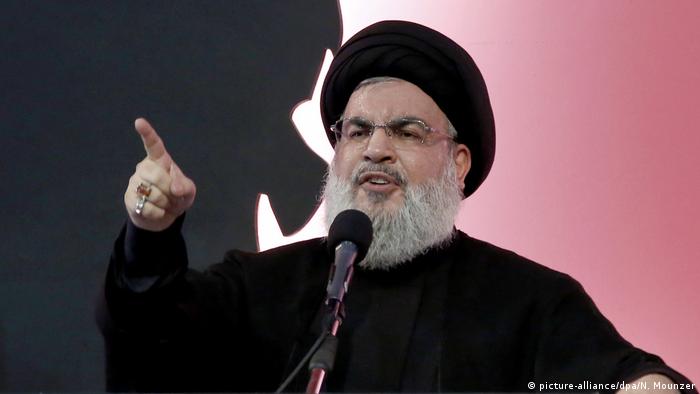 Germany "succumbed to American will" when it chose to ban the Lebanese shiite group Hezbollah, the movement's leader said in a televised speech on Monday, his first public comment on the ban since it was announced last week.

Germany "bowed to the decision by the US administration," leader Hassan Nasrallah said.

"This is part of the US-Israeli war on resistance movements in the region," he said, adding that Germany did not provide any evidence for its claims against the Iranian-backed movement.

On March 30, German authorities declared the pro-Iranian movement a "Shiite terrorist organization," banning it from any activity on German soil. Police also carried out raids on mosques and organisations linked to the group.

"All the brutal attacks on mosques and organizations are condemned," he said. "There was no need for such brutal practices other than to present credentials to the Americans."

Despite his anger, Nasrallah said Germany's decision had not been a surprise.

"The German decision was expected and we expect other European countries to follow," Nasrallah said. The leader claimed Hezbollah had not been active in Europe for a long time.

Hezbollah was founded in 1982 during the Lebanese civil war. The group fought another bloody war with Israel in 2006. The movement is financed and trained by Iran, from where it draws the support of the country's Shiite community.

The US and Israel have long considered Hezbollah to be a terrorist organization. Like the EU, Germany had previously only forbidden the movement's military wing while continuing to accept it as a political force. Hezbollah is a major power in the Lebanese parliament.

US Ambassador to Germany Richard Grenell has made waves after calling for Berlin to issue a domestic ban on the Lebanese political and paramilitary organization. The Foreign Office says no — but is keeping tabs on it. (07.09.2019)

The German Interior Ministry has refuted reports that it plans to ban the Lebanese militant group. The US has recently put pressure on Europe to ban the whole group, not just its military arm. (28.11.2019)