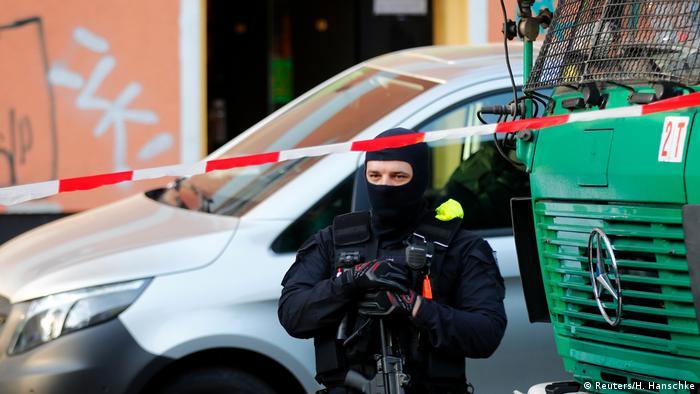 German Interior Minister Horst Seehofer on Thursday banned all Hezbollah activities in the country, his ministry spokesman said on Twitter.

He also confirmed that "police measures are underway in several federal states concurrently," and added that even in times of crisis, the "rule of law is able to act."

The police raids were focused on four mosque associations in Berlin, Dortmund, Bremen and Münster accused of belonging to Hezbollah.

Hezbollah is a Lebanese Shiite organization consisting of a political and a militant branch. It receives significant backing from Iran and has fought alongside the troops of Syrian President Bashar Assad.

Germany had previously distinguished between the group's political and militant arms, but on Thursday the country classified the group in its entirety as a terrorist organization.

"The organization is therefore fundamentally against the concept of international understanding, regardless of whether it presents itself as a political, social or military structure."

Read more:  Pro-Iranian militias: How autonomous are they? 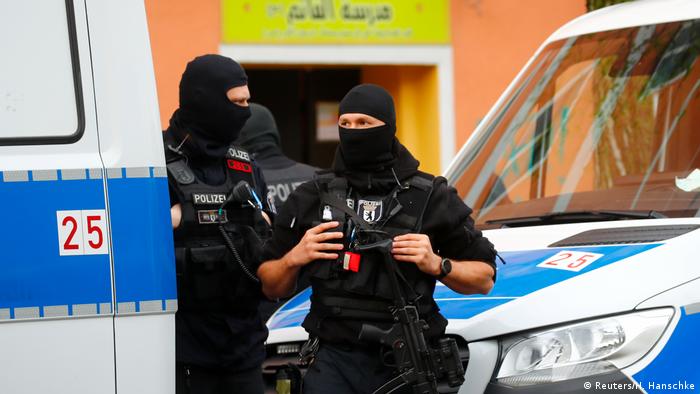 What does the ban mean — at home and abroad?

The ban essentially criminalizes public expression of support for Hezbollah within Germany. Followers can no longer display the flag of the Lebanese militia, a green rifle on a yellow background.

Additionally, the total ban has effectively made it easier for authorities to take action against the group, which in turn makes it more difficult for Hezbollah to conduct transnational activities using Germany as a transit point.

Banning Hezbollah could strain relations between Germany and Iran. However, Iran is dependent on good relations with Germany and the European Union, exemplified most recently by the use of Instex, an EU-Iran trading mechanism designed to skirt US-imposed sanctions and export medical supplies to the pandemic-hit country.

The ban also risks impacting Germany's relationship with Lebanon, as the organization has been represented as part of the Lebanese National Assembly since 1992 and makes up around 10% of all Lebanese parliamentarians. Many German politicians have opposed a total ban, saying allowing Hezbollah's political arm to exist is essential to maintaining relations with Lebanon.

Kathrin Vogler, a spokesperson on peace policy for the Left Party parliamentary group, told DW last year that banning Hezbollah would not improve the security situation but would make things worse for it in the future, as the move gives the impression that Germany is siding with US demands. "This should be rejected with the necessary clarity," she said.

However, other German and international politicians and leaders welcomed the German ban.

Omid Nouripour, the foreign policy spokesperson of the Green Party in the German parliament said banning Hezbollah in Germany was "absolutely correct."

Nouripour told DW that Hezbollah was "trying to find funding in Germany for their work in Lebanon and in Syria, and they are trying to recruit people. This is not something we can accept on our soil."

The American Jewish Committee (AJC) praised Germany's move to ban Hezbollah, calling it a "welcome, much-anticipated and significant German decision" in a statement.

"We now hope other European nations will take a close look at Germany's decision and reach the same conclusion about the true nature of Hezbollah," wrote AJC CEO David Harris. "Permitting its [Hezbollah's] 'political' wing to operate on European soil allows for active recruitment, fundraising, and the poisonous spread of anti-Semitism," the statement read.

Israel's Minister of Foreign Affairs, Israel Katz, issued similar praise for the decision. "In my conversations with [German Foreign Minister] Heiko Maas, he promised to help and I thank him," Katz tweeted. "Hezbollah is a terrorist organization & must be treated as such."

Maas tweeted, "Hezbollah denies Israel's right to exist, threatens violence and terror and continues to massively upgrade its missile arsenal. In Germany, we have to exhaust the rule of law to tackle Hezbollah's criminal and terrorist activities."

How did the Hezbollah ban in Germany arise?

Authorities estimate around 1,050 people in Germany are active members of the Lebanese militant group.

Pressure had been mounting on Germany to ban all arms of the organization since before 2013. However, international calls to do so became louder after the UK implemented an outright ban on the group in February of last year.

In response, Niels Annen, the deputy minister in the Foreign Ministry, told news magazine Der Spiegel that Germany would not declare Hezbollah a terrorist organization. The movement was a prominent part of Lebanese society and part of the country's political landscape, he said.

In September, the now-US acting Director of National Intelligence and US Ambassador to Germany Richard Grenell published an op-ed in German daily Die Welt, formally calling for a ban on the group, saying that it sponsors terrorism and anti-Semitism.

The AJC's Harris echoed that sentiment in October, following a shooting at a Halle synagogue, which left two people dead and two injured.

Just a month later, however, the Interior Ministry denied that an outright ban of Hezbollah was under consideration, following reports that the ministry had been moving closer to an agreement on a total ban.

A group with international ties

Hezbollah maintains close ties with Iran and is seen by many as an extension of the Iranian regime. According to Nathan Sales, the coordinator for counterterrorism within the US Department of State, Iran provides Hezbollah's Lebanon chapter with over $700 million (€643 million) per year, while the group's annual budget is estimated to be around $1 billion.

Within that financing mechanism, Hezbollah makes an estimated $300 million per year through international transactions, including drug smuggling and trafficking in counterfeit products. In order to conduct such activities on such a broad international scale, the group needs strong international roots — not just a foothold within the Middle East.

Some experts and diplomats have said that by allowing the political arm of Hezbollah to thrive in Germany, the government had effectively made the country a hotbed for money laundering.

"Germany is incredibly important for Hezbollah, because Germany is an Eldorado for money laundering," political scientist and scholar of Islam Ralph Ghadban told DW.

US Ambassador Grenell had echoed that sentiment in his calls to ban the group.

Activities in Syria and Lebanon

The Shiite Islamist political, military and social organization wields considerable power in Lebanon. It has been headed by Hassan Nasrallah since 1992.

Hezbollah — which literally means the Party of God — emerged with the support of Iran during the Israeli occupation of Lebanon in the early 1980s, though its ideological roots date back to the 1960s. The group's exact origins are difficult to pinpoint.

The UK is planning to join the US, Canada, France and the Arab League in banning all wings of Hezbollah because of its destabilizing Middle East influence. The move would affect the Shiite group's political wing. (25.02.2019)